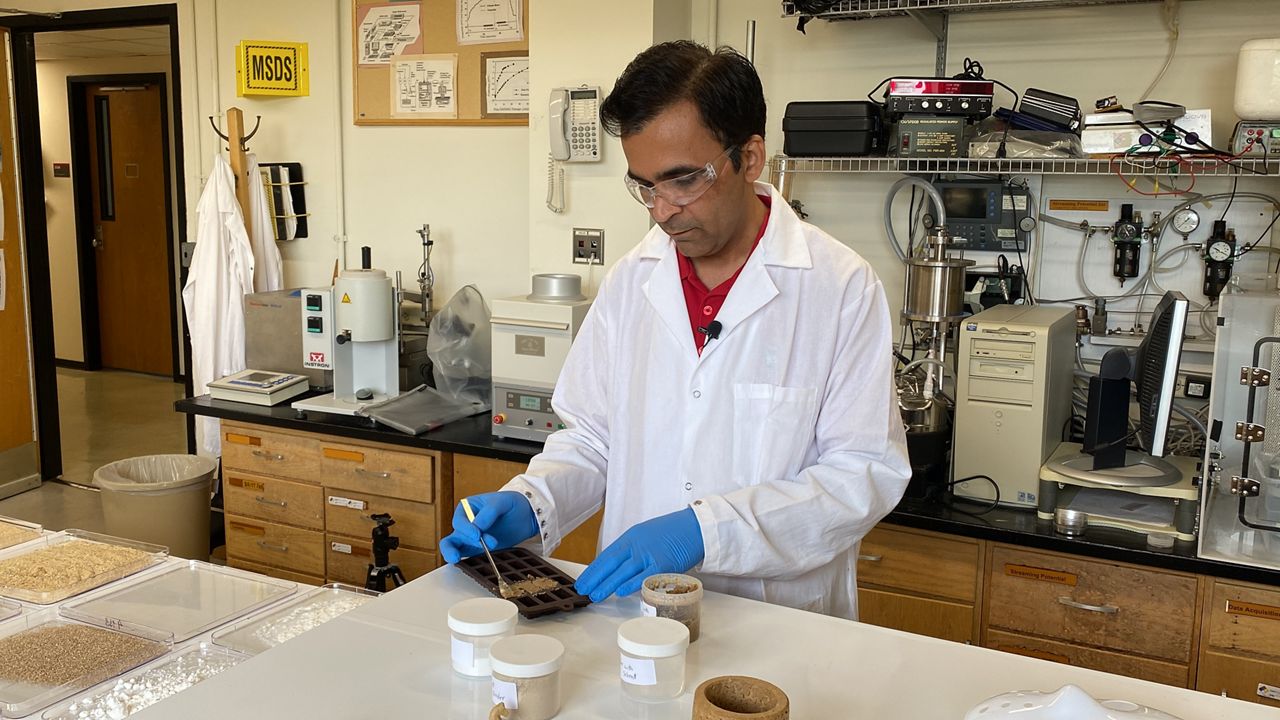 Dr. Lokendra Pal is one of the professors helping to create the Styrofoam alternative.

Styrofoam alternative made from sawdust being tested in N.C. State lab

RALEIGH, N.C. — According to the United Nations Environment Programme, approximately 36% of all plastics produced are used in packaging, including single-use plastic products for food and drink containers, approximately 85% of which ends up in landfills or as unregulated waste.

It often takes decades if not centuries for plastic to decompose, but Dr. Lokendra Pal and Dr. Lucian Lucia, a pair of N.C. State professors, have created an alternative that’s better for the environment.

Approximately 36% of all plastics produced are used in packaging, including single-use plastic products

It often takes decades, if not centuries, for plastic to decompose

Two N.C. State professors are testing a Styrofoam alternative made out of sawdust

If all goes well, these materials could hit the market in 2023

“The wildlife or the waterways or in our solid waste. Everywhere we see plastic,” said Pal, a professor in the Department of Forest Biomaterials at N.C. State.

Pal is very familiar with the climate crisis and how plastic harms the environment.

“It's not just, 'oh, we use it, and then we throw it out and this can go to the landfill.' Microplastics and especially polystyrene is a light material and can break down and slowly going to waterways. That is affecting all of us,” Pal said.

He’s spent years looking for ways to reduce plastic consumption and says, at first, many businesses in the private sector weren’t convinced there was another option.

“We started working on this technology in 2016,” Pal said. “In the first two or three years was, ‘no, there’s no way we can come up with something that meets the cost, meets the technical issues.’”

The solution he found lies in chess pieces and Legos in an N.C. State lab.

“If you look at North Carolina we have a lot of lumber industries, and they produce lumber for building and construction material. A lot of side product goes to the paper industry,” Pal said. “But it’s still this powdery material that’s either being burned or left behind. We started looking into that. Can we take that and turn that into something useful?”

Sawdust is a byproduct that’s lightweight, cheap, and there’s a lot of it out there.

Pal starts with raw sawdust, then grinds it, sifts it and then adds a binder to make it all stick together before he puts it in a mold and dries it.

“The process is simple. It's not very energy intensive. It doesn't use water,” Pal said.

Items made this way don’t take decades or centuries to decompose.

“It would definitely be within months that this will degrade. That’s a huge difference,” Pal said.

Pilot and commercial trials for these new materials will happen for about the next six months. If all goes well, these materials could hit the market in 2023.

For now, N.C. State researchers are focusing on using the sawdust to make food service items and packing materials. They are also exploring ways to make these items out of hemp fibers, as well as how to incorporate 3D printing into the process.