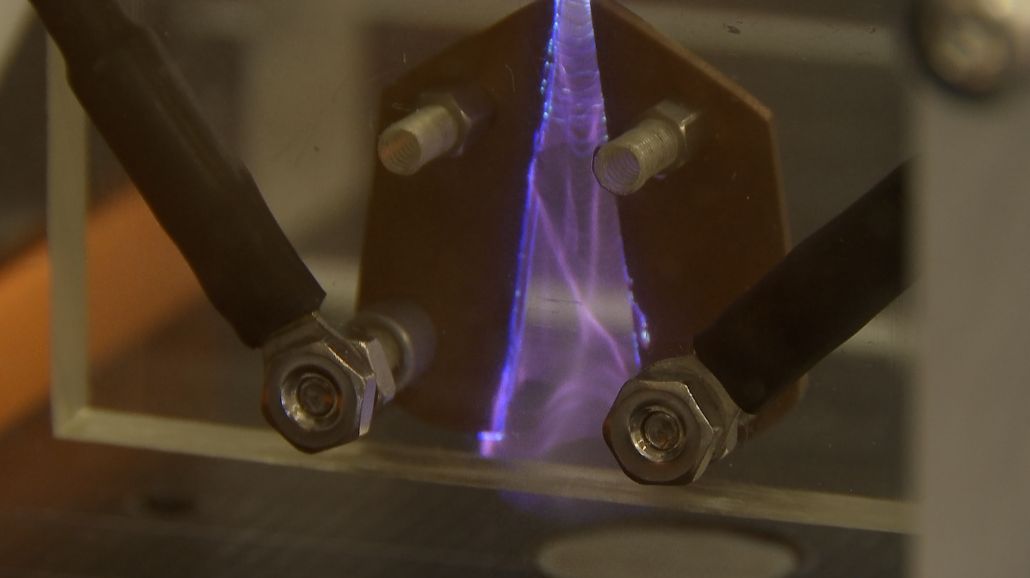 MORRISVILLE, N.C. – From a small metal emitter, an arc of plasma reaches down to a stainless steel disc, meant to simulate the rail of a hospital bed. Within 90 seconds, virtually every virus and bacterium on the surface will be destroyed.

It's the result of a decade's work at Morrisville-based APJeT, Inc. on atmospheric plasma technology. First developed at Los Alamos National Laboratory as a way to disinfect sensitive electronics, the technology was adapted to provide a water-free way to apply coatings to fabrics.

“The fact that you don't use any water is big,”said Gregory Roche, APJeT's vice president of research and development. “Textiles is a huge consumer of water.”

However, COVID-19 changed all of that. When the pandemic began, Roche said company CEO Bentley Park asked his 10 employees to look for ways to bring their work to bear on the SARS-CoV-2 virus.

Roche said he and his teammates remembered the earlier disinfection research. They started with a chamber that could quickly disinfect a box, something they intended for use in the shipping industry. By June, they had built a prototype for a wand that could emit a jet of plasma derived from the air in a room. The team has since built a filter for an HVAC system.

Company data shows a test using the OC43 coronavirus, a surrogate for the virus that causes COVID-19. The surface disinfection system killed off virtually every virus on a test surface in 90 seconds. The air disinfection system killed 99.9% of staphylococcus epidermidis bacteria in three air turnover cycles, the time needed to fully circulate a mass of air through an HVAC system.

“I don't go out to restaurants and I won't until I feel safe,” Roche said. “If we had something like that purifying the air around me, then I would feel safe to go.”

When the COVID-19 pandemic began in March, science, medicine and technology-oriented companies around the world brought their resources to bear on the problem. In North Carolina, research and development companies accounted for 2.6 percent of the state's gross domestic product in 2016, the most recent year for which data are available. Those companies cover a wide variety of subsets within the R&D umbrella. Life science startup KNOW Bio researched the ability of nitric oxide to inhibit COVID-19 reproduction in patients. Software developer Field2Base devised a workplace health screening app.

NC State economist Prof. Michael Walden said the science and technology sector might be the only segment of the economy to benefit from the pandemic. He said we can expect very rapid growth in that area.

“I do think that there will be at least some short-term opportunities for businesses to produce those kinds of products and services that people use more of during pandemics, even if a pandemic isn't on the horizon,” he said.

Walden said the work of science and technology-oriented companies will continue long after the COVID-19 pandemic is over. As a result, he said North Carolina is very well-positioned to take advantage of the growth in that sector. He noted the large presence of such companies and research-oriented universities in North Carolina's major metro areas.

The big question is how future growth in the science and technology sector will be distributed. Walden said there is a real risk it could concentrate in large metro areas, especially the Triangle and Charlotte, at the expense of rural and small-town North Carolina. Improved rural broadband service could incentivize growth in previously-neglected areas. Further, Walden noted many technology companies are turning to applicants with two-year degrees and technical certifications. This means such jobs are no longer out of reach for people without a college degree.

APJeT's CEO says even though the company will continue to refine its plasma technology for textile industry use, it's in the disinfection business to stay.

“I think this is going to be a generational impact,” Bentley Park said. “It's going to be here for a very long period of time. And I think going forward, this might be a benefit because now you're going into places and they're going to be cleaner.”