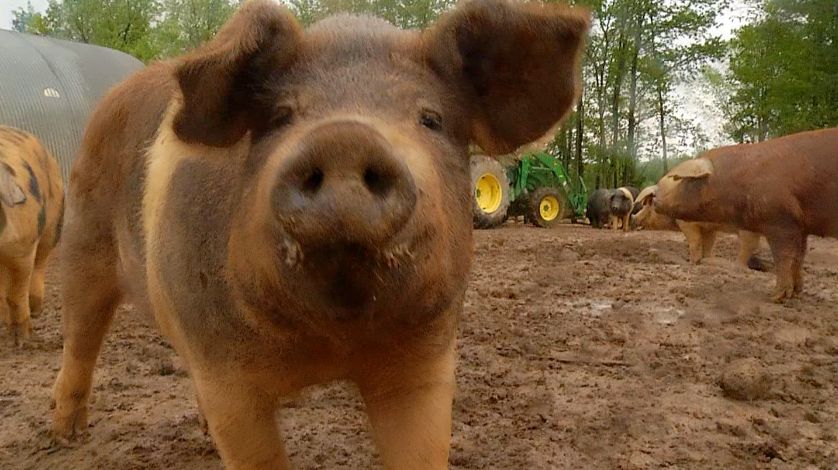 FRANKLIN COUNTY, N.C. – On a damp April morning, Mike Jones must pick out hogs for the slaughterhouse.

He and a farmhand round up half a dozen animals and load them onto a trailer. It's a routine operation that has taken on new urgency since the COVID-19 pandemic began.

“We have decreasing sales September all the way through February,” he said. “So I went through six months of sales down 30 percent every month. And then, in March, it would normally go back up, but this time, it went up triple what it would normally have gone up.”

The rush of panic-buying that accompanied the pandemic emptied store shelves and farmer's markets alike. Farmers focused on individual consumers have seen a tremendous sales spike, but farmers who cater to restaurants have watched their balance sheets crater.

The virus itself adds to the pressure Jones faces. Jones sells all of the food he raises at the State Farmer's Market in Raleigh. If he gets sick, he won't be able to work his stand at the market. And if the rest of his family gets sick, the stand will have to close.

After loading up his hogs, Jones drives them to Barrett Twitty's slaughterhouse and meat processing plants in Nash County. Twitty, who also has a hog farm of his own, said he has lost roughly 70 percent of his business compared to where he normally is at this time of year. Not only has restaurant demand plummeted, Twitty said people are canceling whole-hog roasts. This has forced him to seek other sources of revenue, including boxing and freezing meat.

“Every week is a little more challenging and the outlook looks a little bit worse,” he said. “If we did not have this going right now, we're going into a very big grilling season, this is normally one of our biggest seasons coming up.”

Jones said processors like Twitty are the bottleneck in the food supply chain. If Twitty goes out of business, that puts more pressure on other processors. Jones can't process his own hogs, and he said most meat farmers outside of the poultry business can't do so, either.

“If they shut down, I will go through my inventory in two to three weeks, and then I will have to shut down as well,” he said.

From Twitty's processing facility, it's a roughly half-hour drive to Jones' stand at the farmer's market. Jones' son Max has noticed a change in customers since the pandemic began. He said he is noticing more new customers and more requests for curbside and delivery service. Max fills these orders as best he can while trying to protect himself. He wears a mask and gloves throughout the day and takes a shower as soon as he gets home.

Mike Jones said the best way to keep the supply chain open and protected is to buy directly from farm stands and farmer's markets. This keeps smaller processors in business and insulates consumers from global supply chain shocks. When you go to the market, Jones asks that you practice social distancing and stay home if you are sick.