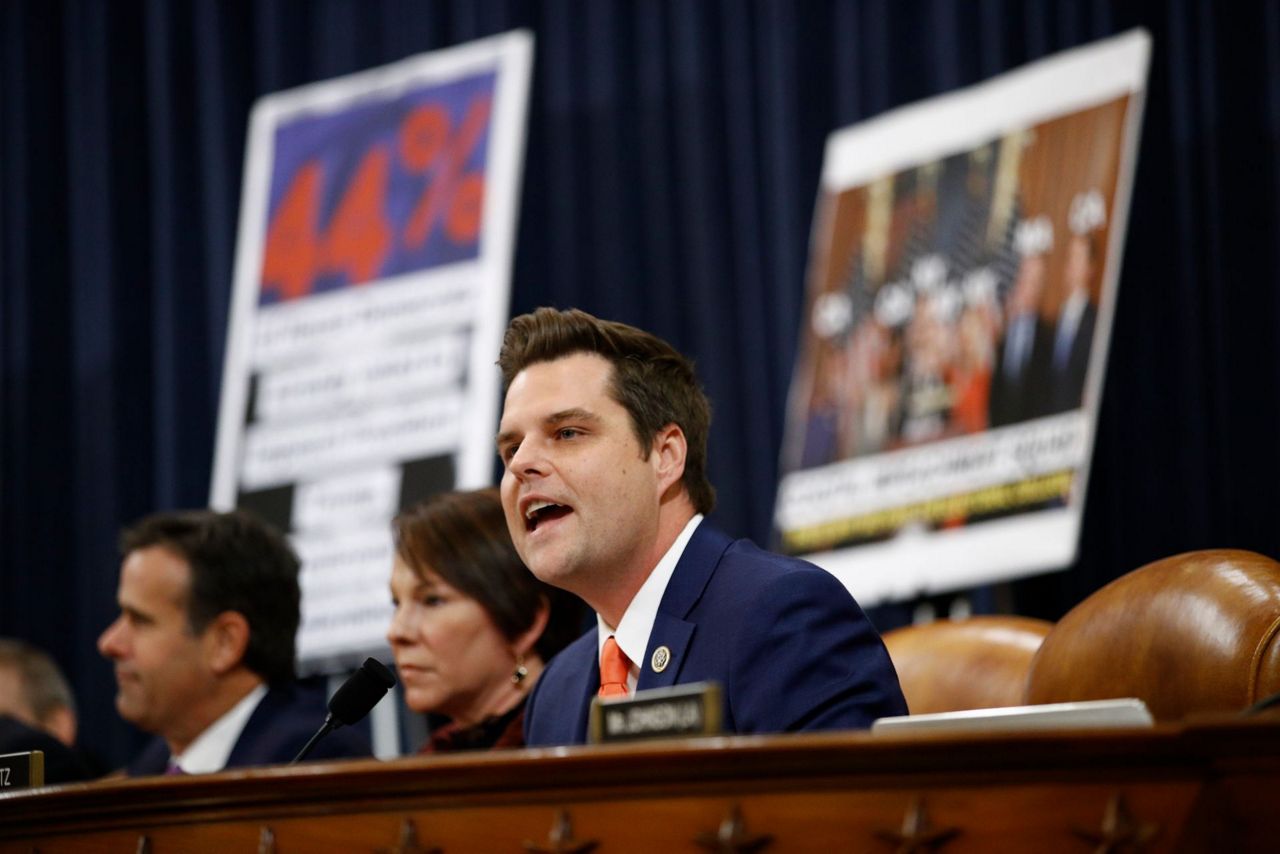 2 of 2
FILE - In this Dec. 11, 2019, file photo Rep. Matt Gaetz, R-Fla., gives his opening statement during a House Judiciary Committee markup of the articles of impeachment against President Donald Trump on Capitol Hill in Washington. (AP Photo/Patrick Semansky, File)

WASHINGTON (AP) — Rep. Matt Gaetz said Monday he will not leave Congress and denied that he “slept with” an underage girl, suggesting that accusations against him stem from political foes angry that he “loathes the swamp.”

The Florida Republican, starting his fifth year in Congress, has been battling to preserve his political career since reports last week that he is under federal investigation for possible sex crimes. In a column in the Washington Examiner, a conservative news outlet, Gaetz predicted that “some of my feckless colleagues in Congress" will call for him to step down.

“No, I am absolutely not resigning," he wrote Monday.

An aggressive and high-profile ally of Donald Trump, Gaetz has so far received almost no public support from his congressional Republican colleagues and none from the former president.

Gaetz, 38, is under scrutiny over whether he violated federal sex trafficking laws, including if he had sex with a 17-year-old and other underage girls, paid them or offered gifts in exchange for sex. That's according to people familiar with the investigation who spoke on condition of anonymity because they could not discuss details publicly.

Gaetz, who has not been charged with any crimes, denied the accusations Monday.

Engaged since New Year's Eve, he wrote, “My lifestyle of yesteryear may be different from how I live now, but it was not and is not illegal."

Gaetz used his column to attack Democrats, news organizations and others, saying his enemies are “just repeating false allegations about a congressman who loathes the swamp and fights both sides of it on a daily basis.”

He also predicted, “I’m sure some partisan crooks in Merrick Garland’s Justice Department want to pervert the truth and the law to go after me."

The FBI, the Biden administration's Justice Department and “the Cheney political dynasty" were among the entities Gaetz accused of unjustly targeting him.

Gaetz's article was published the same day a former congressional aide told reporters he was interviewed last week by the FBI. Nathan Nelson, a military adviser who left Gaetz's office in October, said he was questioned about whether he'd left that job because he knew of Gaetz's “involvement in illegal activities."

“I’m here this morning to state that nothing could be farther from the truth. Neither I nor any other member of Congressman Gaetz's staff had any knowledge of illegal activities,” Nelson said at his home in Santa Rosa Beach, Florida.

Nelson provided no specific details about the FBI's questioning. Without detailing them, he said he believes the charges against Gaetz are false.