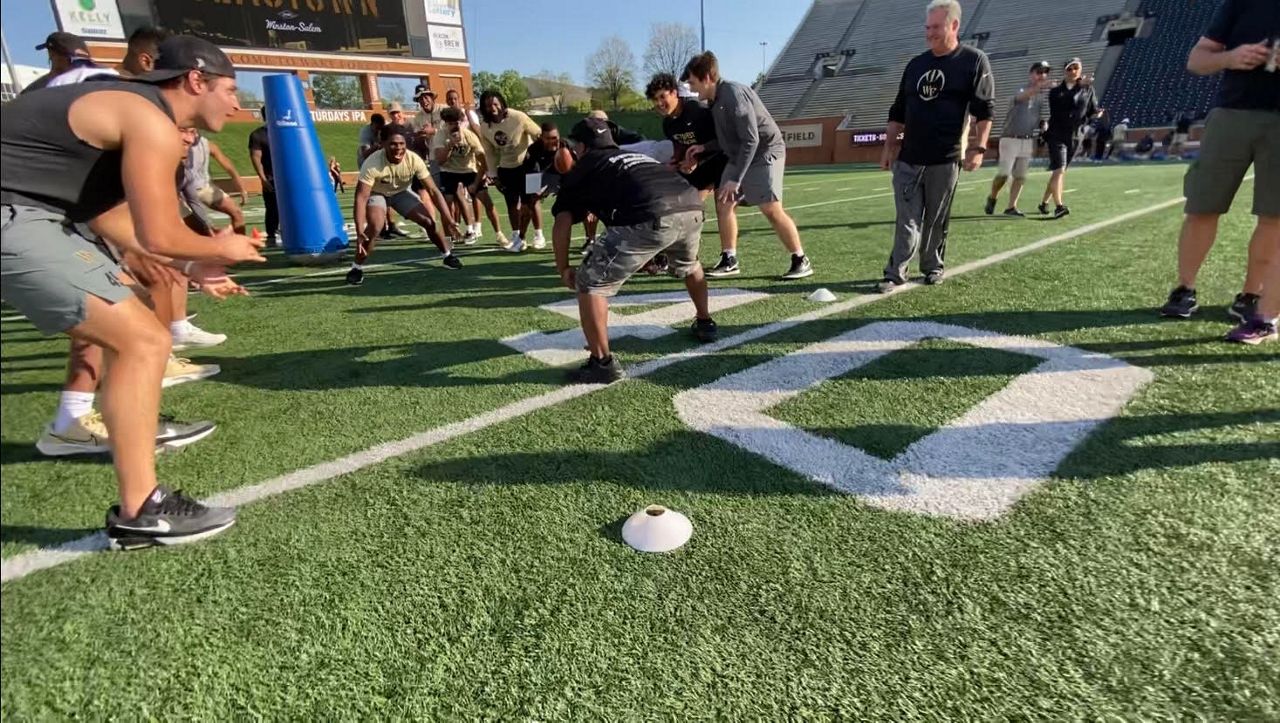 WINSTON-SALEM, N.C. — Special athletes got a chance to play one-on-one games with the Wake Forest football team this week.

Nick Martin was a football player for the day, becoming the newest addition to the Wake Forest football team at the home of the Deacon's Truist Field.

“I love the touchdown, throw the ball with your teammate,” Martin said.

Martin has Down syndrome. He’s 19 years old and a graduating high school senior from Wheatmore High School in Randolph County.

“I feel very excited to see he has that much energy and that much drive, to go with what he loves, he is a go-getter, and he gives it all he's got, and I am so proud of him,” said Martin's mother, Shannon Hines.

Martin doesn’t let challenges stop him. He’s participated in Victory Day with the Down Syndrome Association of Winston-Salem and volunteers from the Wake Forest football team, running football practice drills across the field at six different stations with the help of Deacon players.

“Just the opportunity to come out here and spend time with them really resets your perceptive on life and what you find important. Just to spend time with them probably does more for us then it does for them,” Michael Kern, a sophomore quarterback with Wake Forest football, said.

Martin’s mom says she doesn’t use the word "disability" when she talks about Down syndrome. Instead, she likes to call it a different ability, focusing on the positive.

“As they struggle through school and different things like that, we always hear a lot of negatives, but it’s always good and feels good to be around positive people and positive atmosphere that provides that support and makes them feel like they are doing a great job - and they are,” Hines said.

On the football field, Martin is shinning like a star.

“Cause of the first down, pep ball, return the field, that’s it,” said Martin.

He struggles with reading, but his mom says his ability to retain what he sees has helped him.

“He likes to imitate what he sees, and that has helped him to be more social and of a more social butterfly that he is. And he is able to communicate just through his actions and warm smile, and that’s just an infectious thing he has about himself. That makes him, him,” Hines said.

“When you feel included, and you’re not singled out, and you’re not always just kind of put there, I feel like it’s just a great feeling to just feel that love and closeness and feel like you actually belong somewhere,” Hines said.