Joey Huei has been in the commercial fishing industry around the New River for 50 years. (Charles Duncan/Spectrum News 1)

Raw, smoked or fried? The oyster industry is growing in North Carolina

The water was clear but cold in Stump Sound on a recent December Friday. Capt. Joey Huei steered the 20-foot Carolina Skiff through the shallow water between Topsail Island and the mainland. He’s been in the commercial shellfish industry in these waters around Sneads Ferry and Camp Lejeune for 50 years.

Wild oysters peek out of the mud under the water. Oyster farms, rows of cages on anchored buoys, hug the shoreline of the islands in the sound.

“It’s like a cycle, you have good years and bad years. Last year, everywhere we went there were oysters,” Huei said as he steered the boat slowly through the shallow sound. “They’re not as plentiful as they were last year.”

“The past 50 years, I’ve seen good years and bad years. It’s just something that happens,” he said.

Huei and his son, also named Joe Huei, show how they have always fished for wild oysters with a set of long wooden tongs with metal teeth on the end. He uses the tongs to dig the oysters from the mud, dropping them on the bow of the boat.

Oysters have long been ubiquitous along the North Carolina coast. But the industry is changing as legislators and regulators in Raleigh make it easier for people to develop new oyster farms to supplement the state’s wild catch with things like crop insurance. 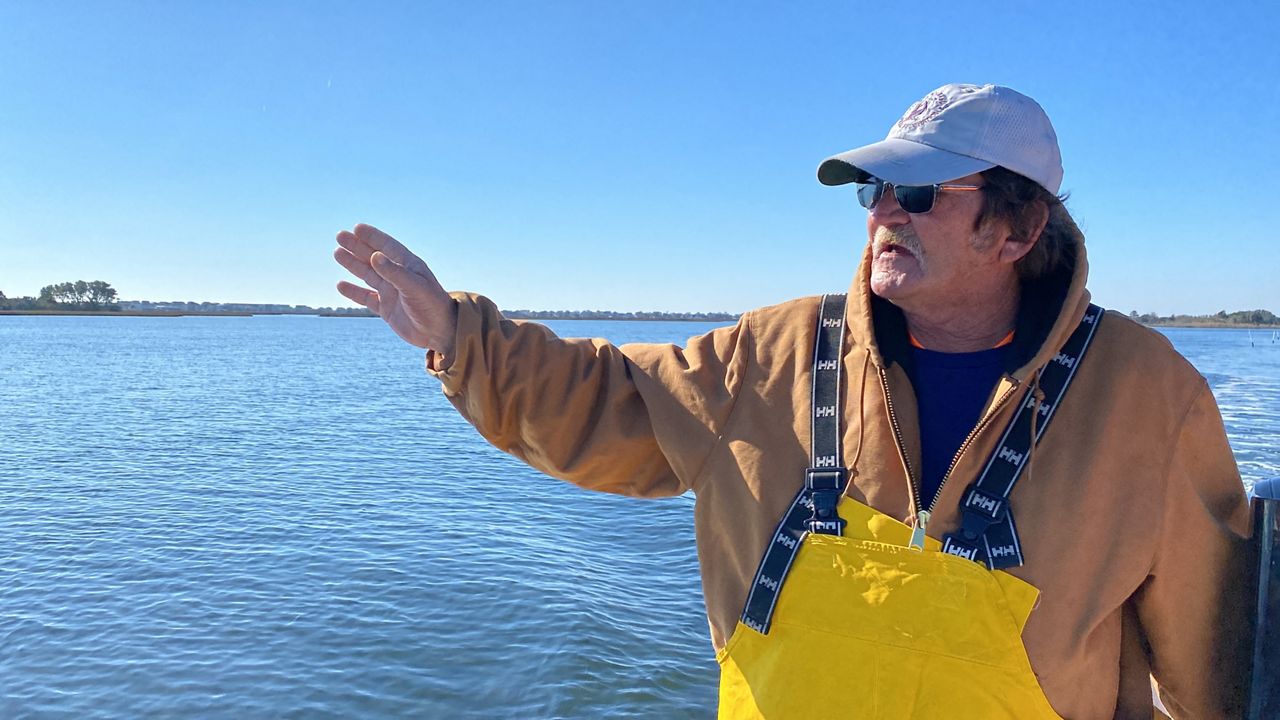 Capt. Joey Huie navigated his Carolina Skiff through the shallow waters of Stump Sound on a Friday in December. (Charles Duncan/Spectrum News 1)

The annual oyster harvest in North Carolina pales in comparison to the state’s neighbor to the north. The commercial oyster industry in Virginia harvests more than double what North Carolina records, according to the Chesapeake Bay Foundation.

But North Carolina is working to bolster its oyster industry.

“Stump Sound is some excellent water. It’s very productive, produces some world-class oysters. The oysters here are just fantastic. Some people call them the Cadillac of oysters,” said Ted Wilgis, a coastal scientist with the North Carolina Coastal Foundation.

“Oysters are a very important economic tool as well as ecosystem tool for North Carolina,” he said.

Oysters and other shellfish are a key part of the coastal ecosystem, filtering water and helping create an environment for other creatures in the sound.

The Coastal Federation and the state have done a lot to help protect these waters. From the boat, Wilgis points out Bermuda Island, in the sound between the mainland and Topsail Island. The small island covered in shrubby trees had been slated for development years ago, but the local community, along with Wilgis’ organization and other groups, managed to pull together to protect it.

The Nature Conservancy bought the island and gave it to the state. An old Boy Scout camp, on the mainland side of the sound, is now protected too.

Both the older and younger Hueis have been fishing these waters since they were children.

“When my grandfather was alive he said I’d seen more change in my life than he’s seen in his," the younger Huei said. “We’ve got shopping malls and housing developments, four- or five-story apartment buildings.”

To build all that, developers have chopped down trees and graded over forests, he said. 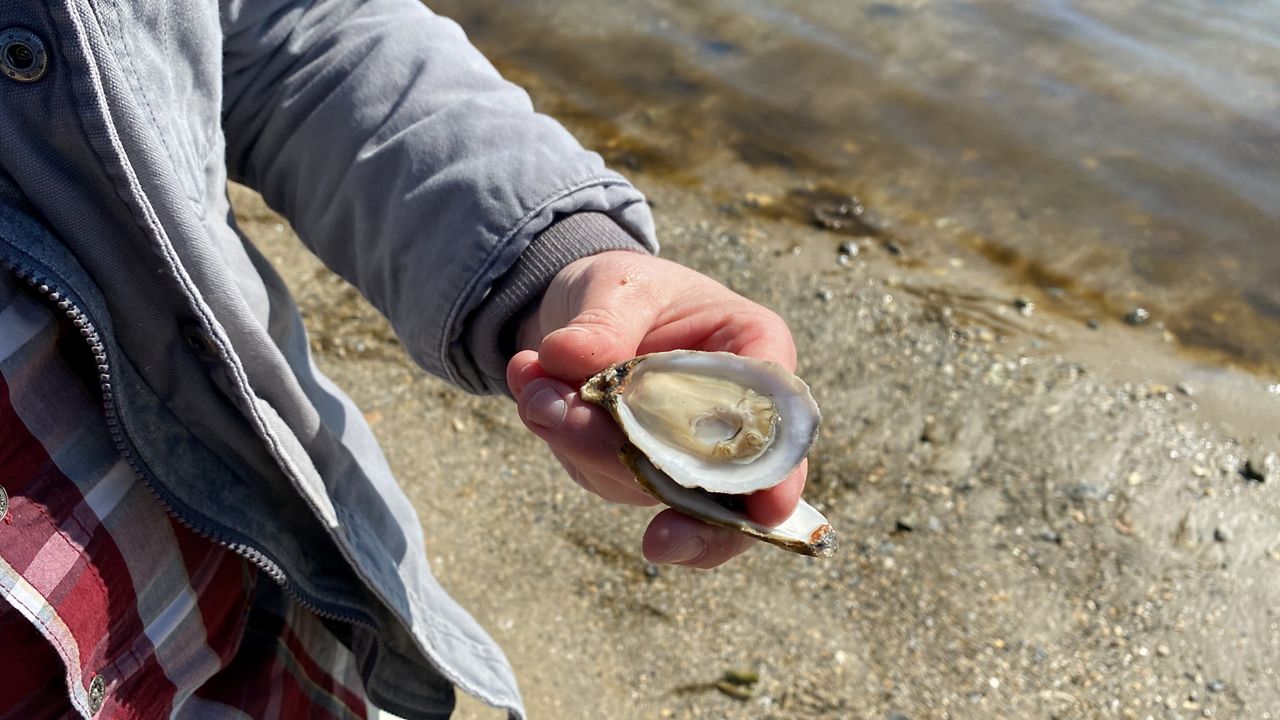 The Hueis don’t work in the commercial fishing industry much anymore. The elder Huei had a fish house to distribute seafood until Hurricane Florence flooded much of eastern North Carolina in 2018. Since then, they’ve been working with the Coastal Federation to help clean up debris from the storm.

They still average about a ton of debris a day, as they have for about three and a half years. They spend their days pulling pieces of dock and other big detritus from the sounds and marshes along the coast.

Wilgis said the effort, involving several crews along the coast, has pulled more than 2.6 million pounds of trash from the water.

It’s all part of cleaning this stretch of the North Carolina coast so it will still be here for generations to come. And they still come out to fish and harvest oysters. The family marks Thanksgiving each year with an oyster roast, and they’re planning another to celebrate the new year.

The amount of oysters harvested each year has been going up, but Wilgis said the wild-caught harvest has been in a steady decline.

Cody and Rachel Faison, a husband and wife team, own Ghost Fleet Oysters, with their own oyster farm in the sound near Surf City.

Farming oysters is a slow, deliberate process. Talking at a boat landing overlooking the sound, Cory Faison said they get the oysters when they’re about 6mm long. They tend to them as they grow until they’re big enough to be sold to a restaurant, a distributor or direct to consumers.

“When we buy them, they generally start off at a couple cents. By the time we sell them they’re about 75 cents. But it takes about 18 months to get to that point,” he said. “This is not a get-rich-quick scheme.”

“At any one time we have hundreds of thousands of oysters in the water,” Faison said.

He said they grow their oysters so they have a deep cup on one side, perfect for laying out a dish of oysters on the half shell at any top-tier restaurant on the East Coast. 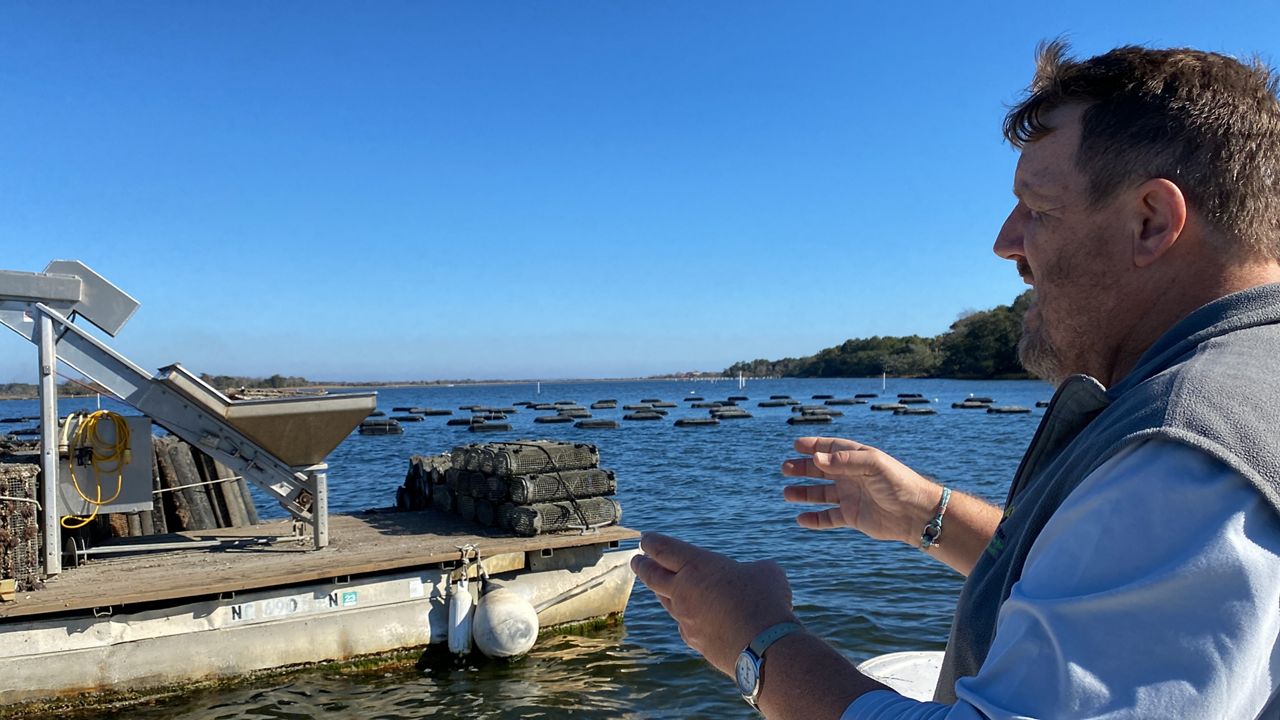 “The vast majority of these are being sold as groups of individual oysters, to restaurants and grocery stores, as individual shucking oysters. These aren’t meant for the big oyster roasts or something like that, these are more high end, they’re a higher-dollar oyster,” said Wilgis, with the Coastal Federation.

These farm-raised oysters grow near the surface of the water, getting more oxygen and nutrients that allow them to grow faster and develop their own unique taste.

“They put a lot of work into them. They put a crop out and it might take a year or two before they can actually harvest them,” he said.

They have a bright, salty taste, when cracking one open and eating it raw by the boat launch. The flavor is different from the wild caught oysters from the same water. The wild caught are meatier, but don’t fill the shell the same way the Ghost Fleet oysters do.

These different flavors and varieties are part of the reason behind the North Carolina Oyster Trail, a new effort to boost the state’s oyster industry. Faison will give tours of his farm to the oyster aficionados on the trail.

“A restaurant writer came down and said, ‘North Carolina could be the Napa Valley of oysters.’ And that’s really the dream we’re working towards,” he said.

How to eat oysters

Faison said his favorite way to eat oysters is raw, straight from the shell.

“It gives it a unique flavor, kind of like smoking pork with mesquite,” the senior Huei said. But, he added, using oak will do if you can’t find wax myrtle.

Fried oysters are another popular option in many restaurants along the coast and inland.

There are also more adventurous ways to use oysters: oysters casino, oysters Rockefeller, oyster dressing (also known as stuffing), oyster soup and others.

Mariner’s Menu, a project of North Carolina Sea Grant, has been collecting traditional seafood recipes for more than a decade. Here are a couple of recipes from the Sea Grant site for those that want to get beyond the classic oyster roast:

“Place 4 cups of bread in a large bowl. Crumble the remaining 2 cups of bread and place in a bowl. Combine with the vegetable-seasoning mix.

“Add reserved oyster liquid until stuffing is moist, but not packed.

“Place in greased baking pan and bake, uncovered, at 375° F until done and crusty outside, about 30-40 minutes.”

“In a skillet, fry bacon until brown. Remove bacon and drain on paper towels. Discard all but 1 ½ tablespoons of bacon grease. Add onion, green pepper and celery to the skillet and sauté until tender. Remove skillet from heat and add lemon juice, salt, black pepper, Worcestershire, Tabasco and bacon and mix well.

“In a lightly greased baking dish, arrange oysters and then spread the bacon mixture on top. Bake until oysters are done and topping is brown for about 10 to 15 minutes.”

This recipe can also be done with shucked oysters in the halfshell.