WATCH NOWExploring Your Health with Erin Billups
NEW PODCAST EPISODEThe Mayberry Effect: How ‘The Andy Griffith Show’ continues to impact us today
COMMUNITY CALENDARAdd An Event to Our Calendar
GET OUR NEW APPOur new Spectrum News app is the most convenient way to get the stories that matter to you. Download it here.

Cloud-seeding drones: What they can and can't do

Technology to make it rain isn't as farfetched some may think. The United Arab Emirates announced it's utilizing drones in Dubai to increase precipitation and decrease temperatures by using electrical charges to enhance precipitation.

The idea of cloud seeding sounds futuristic, but this is a science that has existed for decades.

There are different forms of cloud seeding, but all of them have the same goal of increasing precipitation.

Clouds consist of tiny ice crystals and water droplets, no matter what type of cloud it is.

These ice crystals and water droplets form on small pieces of salt and dust known as cloud condensation nuclei (CCN).

CCN is necessary for the development of precipitation (i.e. rain, snow, sleet and hail). This is where cloud seeding comes into play.

Cloud seeding is a small form of weather modification.

This small modification can aid in improving a cloud's ability to precipitate by artificially adding CCN to the atmosphere to help raindrops and snowflakes develop.

A substance commonly used as CCN is silver iodide.

Airplanes in the sky or flare trees on the ground release the silver iodide into the atmosphere to seed clouds.

Ideally, once a cloud becomes seeded and precipitation develops in the cloud, it becomes robust enough to reach the ground.

"The goal is to produce ice in clouds that otherwise have very little or no ice particles," says Associate Professor at the University of Wyoming Dr. Jeff French.

Researchers and scientists have led cloud seeding efforts in North America for decades, including in the U.S.

The western states, where clouds typically need an extra boost, are some areas that most commonly utilize this science to enhance precipitation.

While cloud seeding has yielded promising results, it's not the answer to mitigating climate change or ending droughts. In the case of droughts, that's because they can take a long time to end. 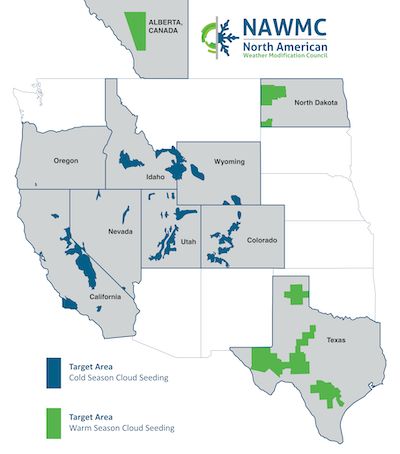 Cloud seeding is not the answer to ending drought

Cloud seeding has led to promising results and effectively enhanced precipitation, but is not the answer to ending drought.

So while the news of cloud seeding in Dubai has garnered a lot of attention, and cloud seeding in the U.S. has produced promising results, it should not be thought of or sold as a 'cure' for droughts and climate change," says French.