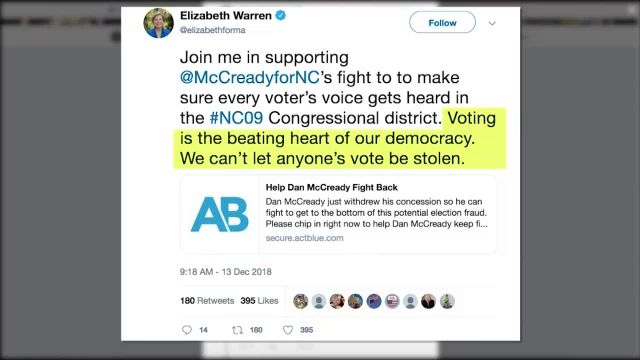 After a Big Money Midterm, What Would a Redo Election Look Like in NC's 9th District?

WASHINGTON -- The 9th District race was North Carolina’s top-dollar congressional election in the 2018 midterm. However, in the event of a new election, will the 9th district be such a financial juggernaut?

Experts say, it depends in part on whether there is just a redo general election between Democrat Dan McCready and Republican Mark Harris or if there is a new primary election as well.

Brendan Quinn, the outreach manager for The Center for Responsive Politics, says the allegations hanging over Harris could hurt him and his fundraising efforts if there is only a redo of the general election and he remains the Republican candidate.

Harris’s campaign teamed up with a campaign operative accused of harvesting absentee ballots. Concerns over election fraud have prompted the North Carolina Board of Elections to delay certifying the election results.

“I expect a lot less Republican groups to go in and support [Harris], because he’s kind of a tainted brand right now,” Quinn said.

This means McCready could have the financial advantage, even though he only has about $10,000 left on hand following the 2018 midterms, according to campaign filings.

“Considering how well he did in 2018 cycle, I would not be surprised if he was able to raise a considerable sum for a special election,” Quinn said.

If another primary is ordered, however, and Republicans get a new candidate, Quinn says the overall race could be much more financially competitive.

Outside groups like the Republican and Democratic congressional campaign arms likely will throw money into the mix. Veterans groups could back McCready, while the Congressional Leadership Fund could help the Republican.

Already, national Democrats are starting to fundraise for McCready online. Massachusetts Sen. Elizabeth Warren tweeted a link to a website where people can donate, writing, “Voting is the beating heart of our democracy. We can’t let anyone’s vote be stolen.”

Join me in supporting @McCreadyforNC’s fight to to make sure every voter’s voice gets heard in the #NC09 Congressional district. Voting is the beating heart of our democracy. We can’t let anyone’s vote be stolen. https://t.co/PEE5raELLh

At the same time, Quinn says, help from progressives like Warren can come with some pitfalls for McCready, who ran in the 2018 midterm as a Blue Dog, centrist Democrat.
Over the past two years, several special elections inspired major infusions of cash. The 2017 race in Georgia’s 6th congressional district – seen in part as a referendum on the newly inaugurated President Donald Trump – broke records.
Quinn says for many reasons, do not expect a repeat of that in North Carolina’s 9th district.
“A lot of national Democrats might be focused more on 2020. This election is not going to determine the outcome of who controls the House, it’s going to be whether there’s 40 Democratic pickup seats or 41,” Quinn said.
If there is a new primary, outgoing Congressman Robert Pittenger, who lost the last Republican primary to Harris, could enter the race. Campaign filings show he has just over $2,500 on hand after the latest election.
Pittenger, who would likely receive financial report from outside Republican groups, has so far been close-lipped on whether he would run again.

Amid questions of election fraud in #NC09, does Rep. Pittenger support calls for a new election? Would he run again if a new election is called? I asked him #ncpol @NCCapTonight >> pic.twitter.com/f8KXFmqWeW

The state board of elections is scheduled to meet regarding the 9th district race on January 11. It is at that time that they could make a decision on whether to hold a new election.