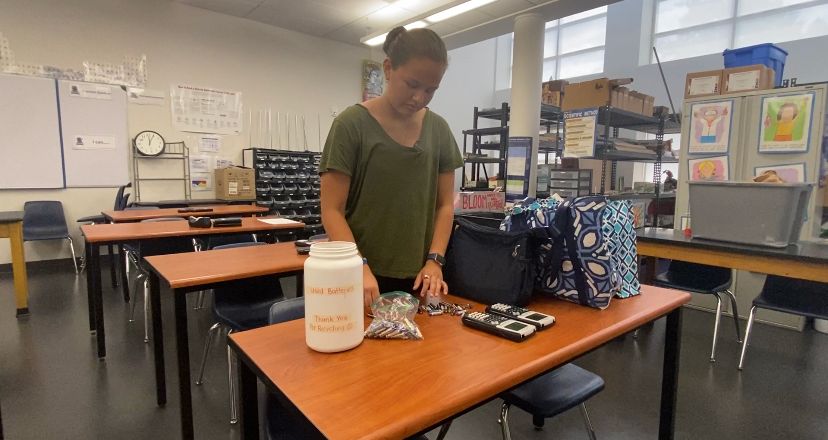 Chloe Thompson, a junior at The Middle College at UNCG, counts used batteries to be recycled into rebar. (Spectrum News 1/Courtney Wallen)

GREENSBORO, N.C. — Students heading back to the classroom have more on their minds than their lessons. Generation Z’s top concern is climate change and environmental issues, according to a study by Deloitte.

Chloe Thompson is a junior at The Middle College at UNCG. She lives with type one diabetes, which inspired her to become a doctor. This summer’s brutal heatwaves and other natural catastrophes reinforce her passion to pursue a career in health sciences.

“I know I personally want to go into the health science field, and so seeing how climate change is having a huge effect on people’s personal health and causing some of them to have to go to the hospitals or even people dying is really sad and hard to see,” she said.

Thompson was glad to attend the health science-focused magnet school. During her sophomore year she decided to join the Go Green Club, a group that works on environmentally-friendly projects for the school and greater Greensboro community. Over the summer, Thompson collected hundreds of used batteries from her community to recycle into rebar and other construction materials.

“A lot of the times, if these things aren’t recycled, they just end up in landfill, and that’s a really big problem because landfill is already taking up so much space that could be used for other things,” Thompson said.

Recycling cuts down on the amount of new materials that need to be made. Most materials are made using fossil fuels that produce greenhouse gasses, which have a negative impact on the environment and contribute to climate change, according to the N.C. Department of Environmental Quality.

Thompson and other students are concerned for the future state of the environment, and the quality of living for future generations.

“It made me want to help with recycling and try to combat some of those things to hopefully help with our future generations so our environment is a cleaner, better place,” Thompson said.

From recycling used batteries to coordinating litter pick-ups in their neighborhoods, young people like Thompson are taking small steps in the big fight against climate change.