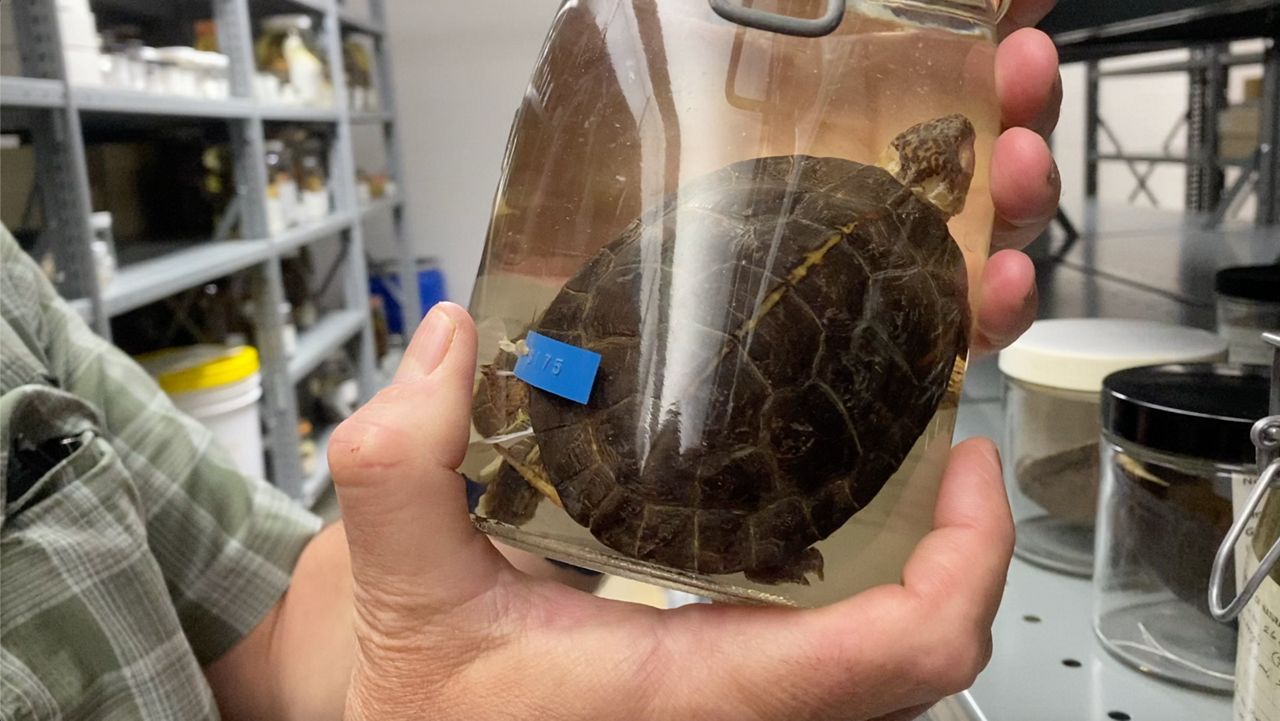 Several reptiles found in N.C. are at risk of extinction

RALEIGH, N.C. — According to a new study published in the journal Nature, at least 21% of the Earth’s reptiles are threatened with extinction. That study, which has ties to North Carolina, may also hold some answers about how to help save reptiles.

Bryan Stuart, the research curator of herpetology for the North Carolina Museum of Natural Sciences, works at the museum’s research laboratory in Raleigh.

“We have about 300,000 preserved specimens of amphibians and reptiles that date back to the mid-1800s,” Stuart said. “Our collection demonstrates that there were so many species that occurred in heavily populated parts of the state, like the Triangle, so many species that historically occurred in Raleigh for example, where you would be very, very hard pressed to find them today just because there’s been so much urban expansion.”

Stuart has worked at the museum for more than a decade. “I can’t imagine myself being in any other work environment than in a natural history museum collection,” Stuart said.

Simply put, he gets to look at animals all day, which is something he used to dream about.

“When I was really young, I didn’t know about natural history museums and collections and so forth. But as soon as I was exposed to one, I knew this was where I wanted to be,” Stuart said.

Most recently, Stuart was part of a first of its kind study that published in the journal Nature.

Stuart says this study is important because reptiles, including snakes, aren’t usually at the heart of conservation efforts. However, if people continue to only protect popular animals, like birds and mammals, that will have a trickle-down effect.

North Carolina is home to four reptiles included in the study that are threatened with extinction: the bog turtle, the spotted turtle, the southern hognose snake and even our state reptile, the Eastern box turtle.

“What's so amazing about bog turtles is North Carolina may actually have most of the world’s remaining bog turtles in terms of numbers of individuals and number of remaining populations,” Stuart said.

Major threats to the bog turtle include habitat loss and exploitation for the international pet trade.

“It is considered to be critically endangered, which is the highest threat level before extinction,” Stuart said.

Stuart says every animal plays a vital role in our ecosystem, and by protecting animals in our own backyard, we’re part of something much bigger.

“North Carolina is a very important, critically important, part of any hope for the bog turtle persisting into the future,” Stuart said.

“In some ways, even though the numbers are disheartening and depressing, the study offers some glimmer of hope,” Stuart said. “Special conservation efforts from global perspective aren't necessarily needed for reptiles. If we can just throw our money and efforts into conserving those habitats that are threatened by urbanization and agricultural expansion, it will benefit not just birds and mammals but also global reptile diversity,” Stuart said.

Scheduled guided tours of the North Carolina Museum of Natural Sciences research lab are available to the public.

The North Carolina Museum of Natural Sciences also offers resources and information about conservation efforts of threatened animals, including Project Simus, which is “an effort to gather and maintain information on the natural history, status, and distribution of the southern hognose snake.”