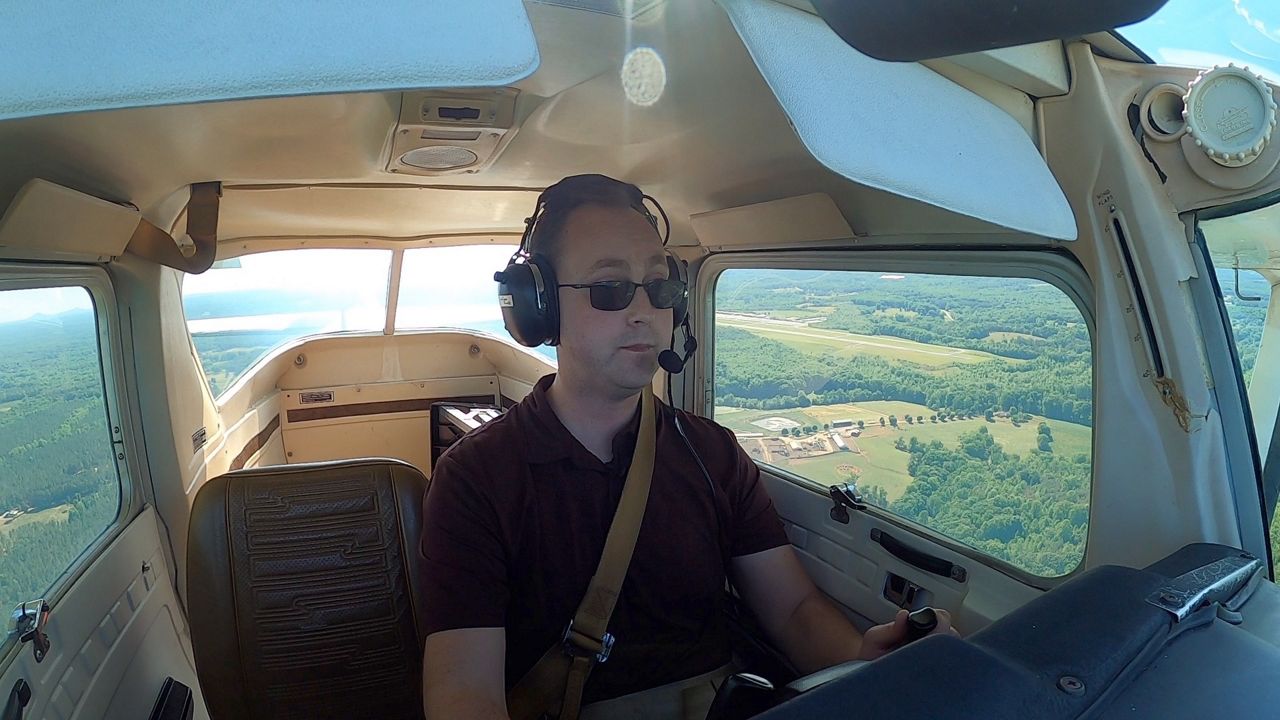 IRON STATION, N.C. — The U.S. airline industry is facing a severe pilot shortage. It's forcing airlines to cut hundreds of flights as North Carolinians are getting ready to jet off on summer vacations.

About half of America's pilots are expected to retire in the next 15 years, according to the Regional Airline Association.

Mike Schilling is following in his father's footsteps by pursuing a career as an airline pilot.

"[My dad] just had a really good lifestyle [as an airline pilot]," Schilling said.

Schilling put his love for aviation on the back burner for eight years to work as an accountant in New York City.

"I said, 'I can't work this desk job anymore,'" Schilling said. "I'm going back to flying, and it felt pretty good."

Schilling is about to apply for a job at a time when the airline industry could be short by tens of thousands of pilots. But passenger demand is at an all-time high.

“This is a great time to be a pilot," Schilling said. "The airlines are respondent to that demand with some good increased pay and sign-on bonuses.”

Becoming an airline pilot requires at least 1,500 hours of flight time without prior experience. Schilling, who has a bachelor's degree from Embry-Riddle Aeronautical University, says he needs 1,000 hours under his belt.

“I could probably get another 100 hours at 960 and get hired and then get the remaining hours in a simulator," Schilling said.

Schilling bought a Cessna 150 plane named "Our Lady" a couple of years ago to help quickly reach his goal.

"This plane was really my golden ticket to getting my flight hours," Schilling said.

Schilling logs his hours several times a week by flying in and out of Lincolnton-Lincoln County Regional Airport.

“The freedom from flying is amazing," Schilling said. "Getting up [in the air] and being able to fly just about anywhere you want is very freeing."

Each year, the airline industry needs to hire at least 1,400 new commercial pilots to fill projected openings through 2030, according to federal labor statistics.

Schilling hopes to touch down soon with a new job as a pilot for a regional airliner before the demand slows.

“The clock is ticking," Schilling said. "And the demand isn’t always going to be there, so it needs to be now.”

Lincolnton-Lincoln County Regional Airport Manager Joe Tate says the pilot shortage has been exacerbated by the COVID-19 pandemic. Tate says senior pilots, who were only a few years away from retirement, were offered incentives to leave early during the height of the pandemic.

Tate expects airline companies, like United and American, to hire about 15,000 new pilots over the next five years. But, he says commercial airliners aren't the only ones who need help.

“What makes the demand even greater is all these freight guys, FedEx, UPS, Amazon, they all need hundreds of new pilots," Tate said. "And their total pilot staffing is over thousands each, so that just adds to the complexity of the situation.”

Tate says flight training can take years to complete and can cost upwards of $100,000. However, Tate says pilots can make up to $200,000 a year by their fifth year in the business.