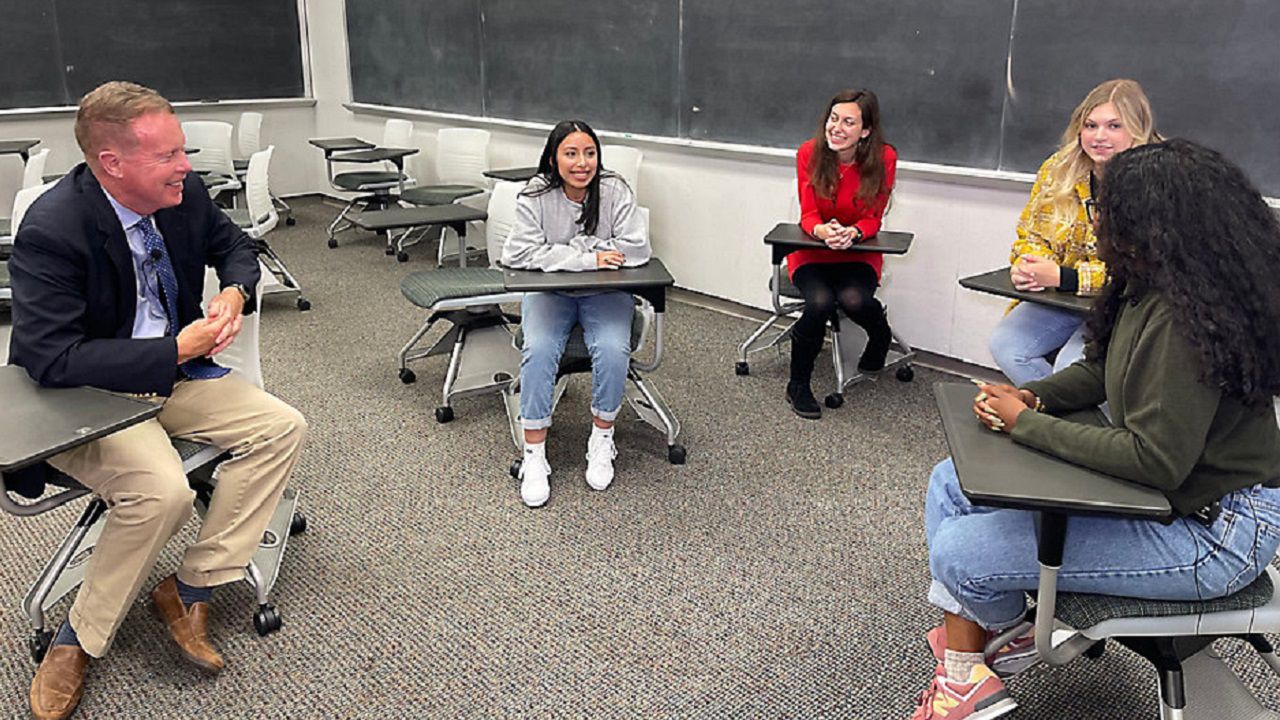 Teaching democracy to students one year after January 6 riot

RALEIGH, N.C. — Thursday marked one year since a mob stormed the U.S. Capitol to prevent a peaceful transfer of power. The event prompted some political science professors to change the way they teach students about democracy.

Professor David McLennan, a political science professor at Meredith College, has been teaching for nearly 30 years. He and his students agreed to sit down for a roundtable discussion on the Capitol riots. The insurrection, which left a permanent stain in the story about American democracy, was eye-opening for him.

“Democracy used to be one of those things you’d start the semester by giving a definition and you’d almost move on from it because it was assumed that everybody understood the same thing about what democracy was, how it was achieved, the goodness of democracy,” McLennan said. “But, January 6 was a real eye-opener for me, in that there are people who really don’t want the will of the people expressed and counted. That’s really what January 6 was to me, is a repudiation of the will of the people. And so now as I think about starting a class or several classes, I’m rethinking how to teach about democracy. It’s no longer a given.”

McLennan has a completely different approach to teaching democracy now. He and his students spend a lot more time discussing the benefits of democracy, including how political stability creates economic growth for citizens.

“Well, I’m always sensitive to the fact that we have students from across the political spectrum. We have conservative students, liberal students, students in between. And the narrative in the classroom can’t be just finger pointing and saying this side is bad, this side is good,” McLennan said. “That leads to at least half the class turning off if I take sides like that. But to present the facts. That’s why I think it’s important not just to talk about January 6, but the 30-year-buildup that this idea of division in this country has been building. The role of social media in terms of that division, but also creating the conditions for January 6.”

When the students were asked about the events of January 6 and how dangerous they were, here’s how they responded:

“I remembered a time in class where we were talking about the participants in the January 6 insurrection and how about 20% of the people who participated in the insurrection were members formally or current of veteran status,” said Hayden Howlett, 20. “And so if people who devote their lives to protecting democracy, don’t necessarily have 100% faith and trust in democracy, what is going on? What is wrong?”

“I think it makes me more scared for true dissent to take place. My initial reaction when I was saw it was that’s so weird that something like that could happen,” said Aminah Jenkins, 20. “But later on it was really hard to watch those videos and then think about the previous summer of protests and people advocating for their rights and for social justice movements, specifically with Black Lives Matter, and how a lot of those protesters were treated and the backlash that they received.”

“Now, I think about the United States, I think about our government, and I’m like, 'wow.' We really are fragile. It really does just depend on people trusting the election process,” said Raynor Dail, 21. “With what’s called the Big Lie, now, people aren’t trusting it anymore. We’re falling into a territory that’s much more dangerous than it had been. The January 6 insurrection, it just to me, it’s like if this happened once, what’s to stop it from happening again? And that’s what terrifies me.”

As we look ahead to the midterm elections in 2022 or the presidential election in 2024, McLennan has some real concerns about a nonviolent coup that could overturn the will of the people.

“I was watching the news last night and in class we’ve been following it as well, that right-wing and alt-right wing people, are instead of focusing on the national, even though that’s what January 6 was was taking over the national election, they’re now focusing on the local elections, and they’re doing it in a nonviolent way. They are doing it kind of quietly.”

In order to prevent another January 6, McLennan believes we need to have laws protecting the counting of votes. He also wants to see accountability built into the system so that there are consequences for people who tried to overturn the 2020 election and create an insurrection.

“To me, the legacy of January 6 is not just one of violence, but one of possibilities. The possibility that we reject democracy for authoritarianism,” McLennan said.