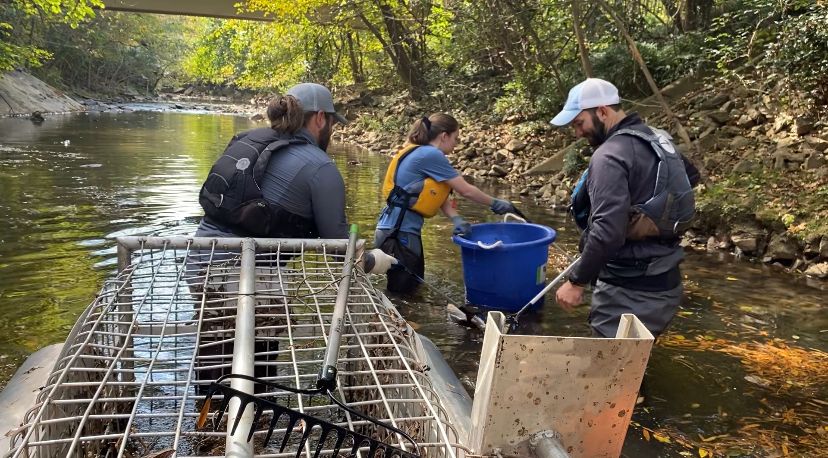 CHARLOTTE, N.C. — Earlier this year, the City of Charlotte mandated use of paper bags for leaf collection and encouraged mulching.

But if leaves are not properly disposed of, they cause flooding and damage to our waterways.

Every time it rains, you’ll find Catawba Riverkeeper Brandon Jones and his team checking out the debris, like leaves, caught in the contraption known as the "Litter Gitter."

They say, as more leaves fall, it’s important to mulch or bag them instead of letting them stream into our storm drains and into waterways ♻️🍂 pic.twitter.com/knN3Uyxenz

“It’s a floating boom attached to the sides and that’s going to direct debris. Our wildlife can swim through but our larger pieces of plastic get stuck so we can capture them,” Jones said.

As the riverkeeper, Jones is responsible for protecting Charlotte’s waterway. He says sometimes protecting creeks means starting on land.

“The vast majority of this was dropped in the parking lot and when it rained it was mobilized and it flowed into the stream,” Jones said of debris.

Jones says the debris varies from Styrofoam to tennis balls, and even tennis shoes. But as trees shed their leaves, flooding can becomes an issue if leaves are not properly disposed of.

“The first thing you’ll notice is, you’ll clog the storm drain and that will cause flooding right there in your road. From a water quality perspective, when you put all those leaves into those creeks it can cause real problems. It’s really important to minimize flooding and pollution by keeping things clear and clean,” Jones said.

In an attempt to keep the waterways clean and clear, the Litter Gitters categorize the trash into 42 different groups, with the goal of locating the origin of the trash.

“We’re not just collecting the trash to remove trash, we’re hoping to find some patterns. If you’ve noticed that trash is disproportionately one brand in one area, we can help to create policy around that,” he said.

Jones says while they’ve made great strides in litter collection, collecting over 100,000 pounds of litter this year, an ideal Charlotte wouldn’t need a program like this at all.