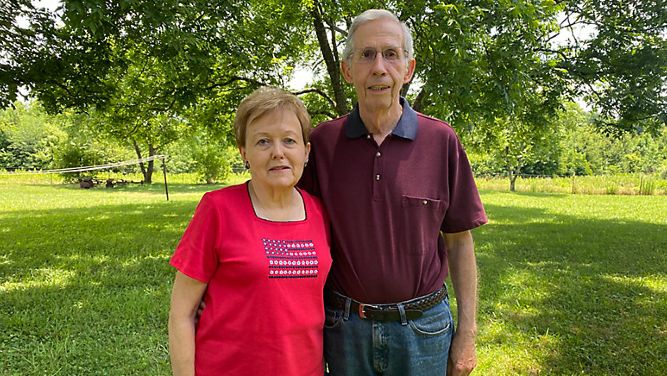 "They told us if you don't sell, they will mine around us": Neighbors refuse to sell to Piedmont Lithium

GASTON COUNTY, N.C. -- On a hot June afternoon, Libby, 80, and Hugh Carpenter, 82,  are outside bent over in their raised garden beds picking out cucumbers.

The couple has lived at their home on Aderholdt Road in Gaston County for almost 50 years. It was passed on to Hugh Carpenter by his grandparents, who originally owned 50 acres on which Carpenter grew up on.

But these five acres are precious and irreplaceable to the Carpenters. They enjoy the quiet space and privacy. They also enjoy the occasional family of deer which like to eat their corn sometimes.

The Carpenters used to keep goats on their land, but their grandson, Will, just graduated from N.C. State University and they plan to give him some land to grow blueberries.

"We just love it, it's so green and just beautiful and lush, and really can’t see any neighbors. I think it's God’s gift to us," said Libby Carpenter.

But the last couple of months the Carpenters have received several phone calls from Piedmont Lithium, offering to buy their land. The company headquartered in Belmont has proposed to build a 2,000 acre open-pit lithium mine in the Carpenter's neighborhood.

"It's just unthinkable. We don’t want to leave and have to relocate. I’m 80 and he’s 82, we don’t want to have to start all over. We love it here," said Libby Carpenter.

The Carpenters didn't even know the area was abundant in lithium, the element used to power cell phones, laptops and electric cars. Other neighbors have also received offers for their land from Piedmont Lithium including Emilie Nelson.

Nelson bought her home across the street from the Carpenters six years ago.

She moved from Charlotte to Gaston County because of the open land, green fields and abundant wildlife.

"We used to own N.C. Wildlife Rehab. We rehabilitated hundreds of injured animals and adapted them to the wildlife and released them. We had to stop when we found out about Piedmont Lithium's plans because we don't want to release animals into a lithium mine pit," said Nelson.

Nelson says she has friends who have sold their land, but they have signed a non-disclosure agreement and can't discuss with her how much they sold it for.

But according to the Gaston County GIS, dozens of homes have been bought by Gaston County Land LLC, which the address is the same as Piedmont Lithium's office in Belmont.

The Carpenters and Nelson are refusing to sell, but they don't want to live beside a lithium pit mine either.

"They told us, if we refuse to sell, they will mine around us," said Nelson.

“I’m concerned about the blasting, and the truck traffic and the noise and the pollution. I would like to keep a legacy going," said Hugh Carpenter.

Their grandson has started a Facebook page, Stop Piedmont Lithium.

Neighbors are encouraging others who have concerns or questions to attend. There is also a Gaston County Commissioners meeting planned with Piedmont Lithium on July 20 at 6:30 p.m.