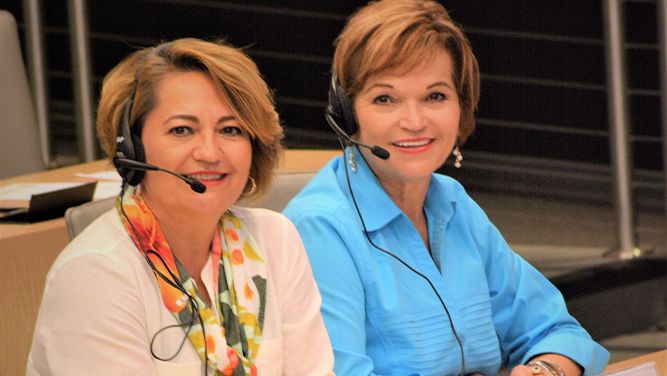 Meet the Sisters Behind Spanish Livestream for Governor Cooper's Briefings

RALEIGH, N.C. -- Two certified interpreters, who are also sisters, are behind the Spanish livestream of Gov. Roy Cooper’s coronavirus, briefings.

Jackie and Yasmin Metivier, who were born and raised in Mexico, simultaneously interpret the remarks of officials into Spanish.

Jackie, President of Bilingual Communications, Inc., says they broadcast the Spanish livestream from a small room at the Department of Public Safety in Raleigh.

“We have a direct feed to what [the governor] is saying and our microphone picks up the Spanish,” Jackie said.

According to the NC DPS, the department started working on the project for Spanish interpretation of news conferences last year. The state used Spanish interpreters during a winter storm earlier this year.

Yasmin, the Wurts Language Services president, says they were expected to provide their services again later this year, but the need came much sooner. So far, they have been interpreting for 29 days during the state briefings.

“It was supposed to be for the hurricanes, but they had everything in place so that when this happened everything was ready to go,” Yasmin said.

The Metiviers have been interpreting together for more than 25 years.

"We've been working as a team for so long that she knows where I'm going to stumble,” Yasmin said.

The business owners say before the briefings, they receive a document outlining the topics officials plan to address. However, they've learned they have to be prepared for changes or new terms being used.

"Secretary Cohen had the list of numbers. She updates the numbers of how many positive cases there are and how many people have died, and the numbers I had on my paper weren't what she was saying because they had already changed within hours,” Jackie said.

The sisters who moved to North Carolina in the 1980s say the rapidly evolving situation and a growing Hispanic population makes their job vital and rewarding.

"Just knowing we are helping the community. They have the most updated information because they can read the paper this morning, but tomorrow is going to be completely different,” Jackie said.

If you would like to watch the news conference briefings from the governor in English or Spanish, visit https://www.ncdps.gov/storm-update.