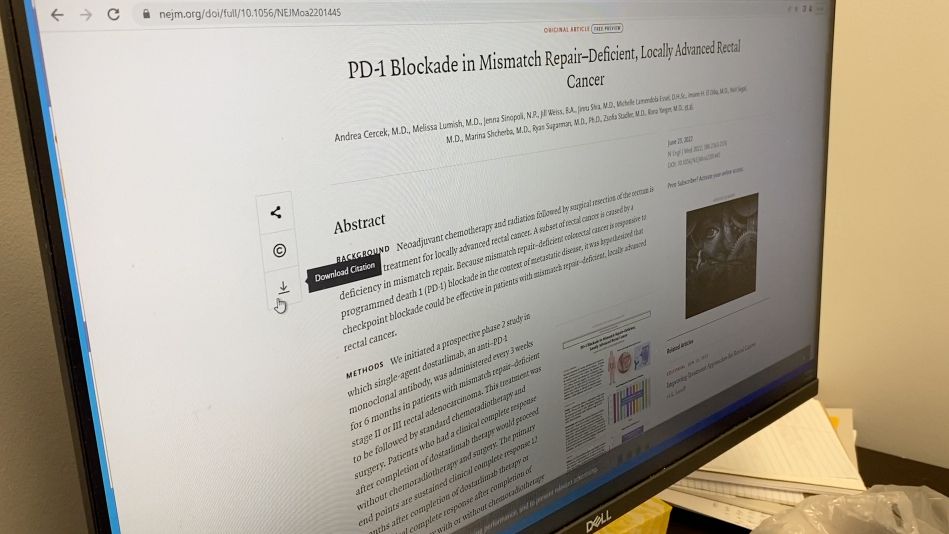 CHARLOTTE, N.C. — A new immunotherapy drug is showing unheard-of potential in the fight against rectal cancer.

Kevin Tatur tries to walk and exercise every day. His doctors told him his legs needed movement because he had blood clots in them and in his chest.

“From that, I developed a swollen leg syndrome so I can’t sit for too long,” Tatur said. “If I drive, I can’t go without an hour before walking around.”

In 2020, Tatur was diagnosed with rectal cancer and went through chemotherapy. While it made his cancer disappear, it also left behind a lot of side effects.

“I can’t be the young whipper I was before,” Tatur said. “I have to watch myself.”

He was excited to hear about a new immunotherapy treatment for rectal cancer that had minimal side effects. Even though it wouldn’t help him, it could help others.

“Chemotherapy and radiation are good, but a different option would really be great for everyone who is going through this,” Tatur said.

Dr. Nasfat Shehadeh, a Charlotte oncologist, says the first 14 people in the phase two study reported no evidence of cancer after six months of treatment.

Shehadeh says the immune system is trained to spot dangerous cells and attack them. But cancer cells often find ways to trick our bodies, allowing tumors to hide and grow. The treatment, Dostarlimab, is given intravenously. It’s designed to retrain the immune system to recognize cancer as the enemy and kill it.

“This is a great study, but we have to keep into consideration that it does not apply to everybody with rectal cancer,” Shehadeh said.

He says it only applies to those who have a tumor with a specific genetic makeup known as mismatch repair-deficient, which is about 5-10% of patients with rectal cancer.

Tatur says even though he experienced side effects from his chemotherapy treatment, it has allowed him to be there for his family.

“I am happy to watch my kids grow up,” Tatur said. “Send my daughter off to college and watch my son become a sophomore in high school. It is the best thing in life.”

But he hopes more research on immunotherapy treatments could help others improve their quality of life.