N.C. State researchers studying residents to see how PFAS may impact their health

RALEIGH, N.C. — N.C. State researchers are looking into PFAS and their possible impacts on health.

PFAS stands for per- and polyfluoroalkyl substances. It's a class of toxic chemicals that can be found in everyday items such as Teflon pans, firefighting foam and inside some food packaging

On Saturday, researchers collected samples of blood and urine from Pittsboro residents to understand how these chemicals may impact human health

On Saturday, researchers collected samples of blood and urine from Pittsboro residents to understand how these chemicals may impact human health.

Hoppin says she believes the immune system is most impacted by PFAS. But there is not enough information yet to understand the connection between PFAS and certain disease or illnesses.

"We don't necessarily know who has been highly exposed, which is why we are collecting blood samples," Hoppin said.​

Hoppin said they can detect low levels of legacy PFAS in almost every person in the United States. But there are certain areas like the Cape Fear River Basin where the concentrations of PFAS is significantly higher. That's why researchers have collected samples from people living in Pittsboro, Fayetteville and Wilmington.

“We're hoping to follow everybody for five to 20 years so we can evaluate the potential human health effects of these chemicals," Hoppin said.

Once samples are collected they are analyzed in different labs across the state, including N.C. State's. Kaylie Kirkwood is a doctorate student there who runs tests some of the samples.​

Kirkwood is originally from Ohio but moved to Wilmington in high school. When she was in her first years at N.C. State, news came out about PFAS in Wilmington's drinking water.

"From then on, I became really passionate about it," Kirkwood said. "I realized that I could actually do something about it when my friends and family were concerned about, 'How many years have I been drinking this and at what levels?'" Kirkwood said. "I was just really interested in following that up ... and seeing if I could do anything to actually make an impact." 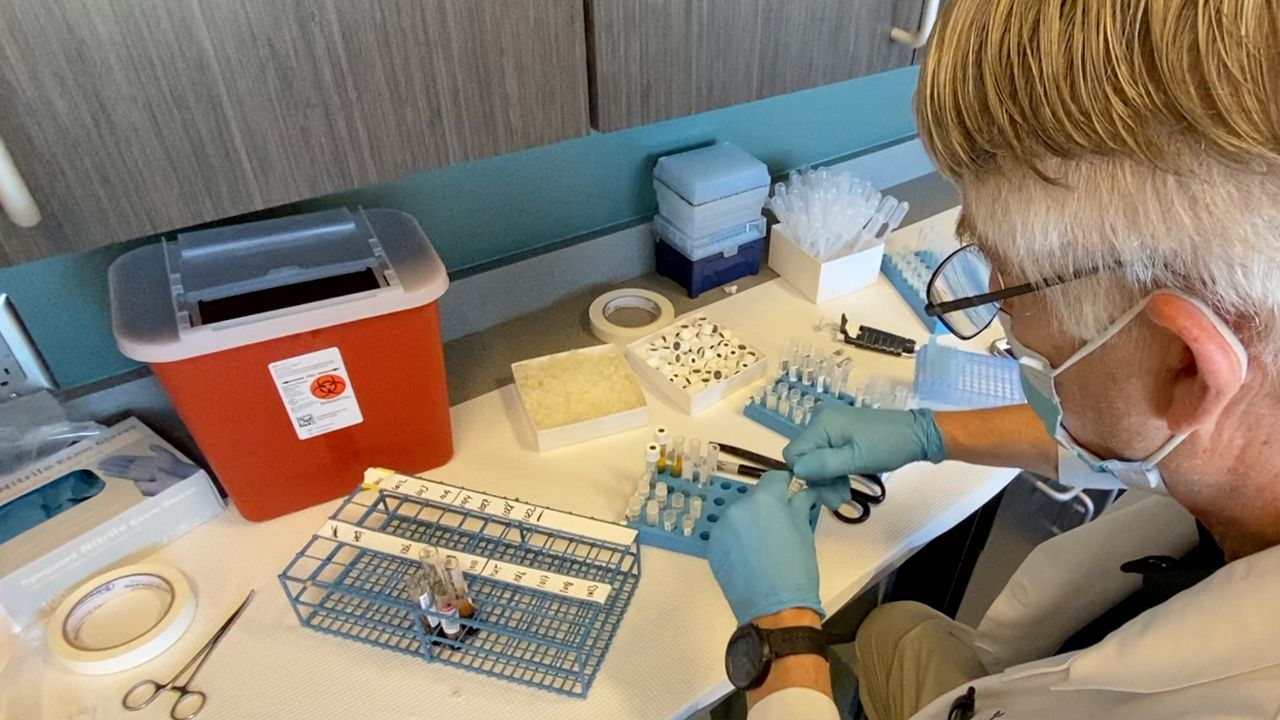 A researcher from East Carolina University pipets blood for testing.

Eventually researchers will report blood levels back to the community with potential health outcomes. There is not an exact timeline for when that will happen.

PFAS stands for per- and polyfluoroalkyl substances. It's a class of toxic chemicals that can be found in everyday items such as Teflon pans, firefighting foam and inside some food packaging.

According to the Environmental Protection Agency, because PFAS are so widely used, traces of the chemicals can be found in blood of people and animals all over the world. Studies have shown some PFAS may be linked to harmful health effects. That's what researchers like Hoppin hope to find out.

​"We are more concerned about the chemicals used to make the products that we use like Teflon pans and Gore-Tex, rather than the Teflon itself," Hoppin said. "So don't go throw out your Teflon pan, but if it's chipping, throw it away and don't give it to the thrift shops."

PFAS don't break down under natural conditions, so Hoppin, Kirkwood and other researchers are working with engineers to figure out how these chemicals can be destroyed, whether that's under extreme heat or using other methods. They are hoping future regulations eliminate and limit uses of PFAS in some cases.

"Things like medical supplies that need to have PFAS, that's an essential use where there is no good substitution for it, " Kirkwood said. "But there are things that we choose to make nonstick or stain resistant or clothing or cookware that really doesn't have to have PFAS in it."