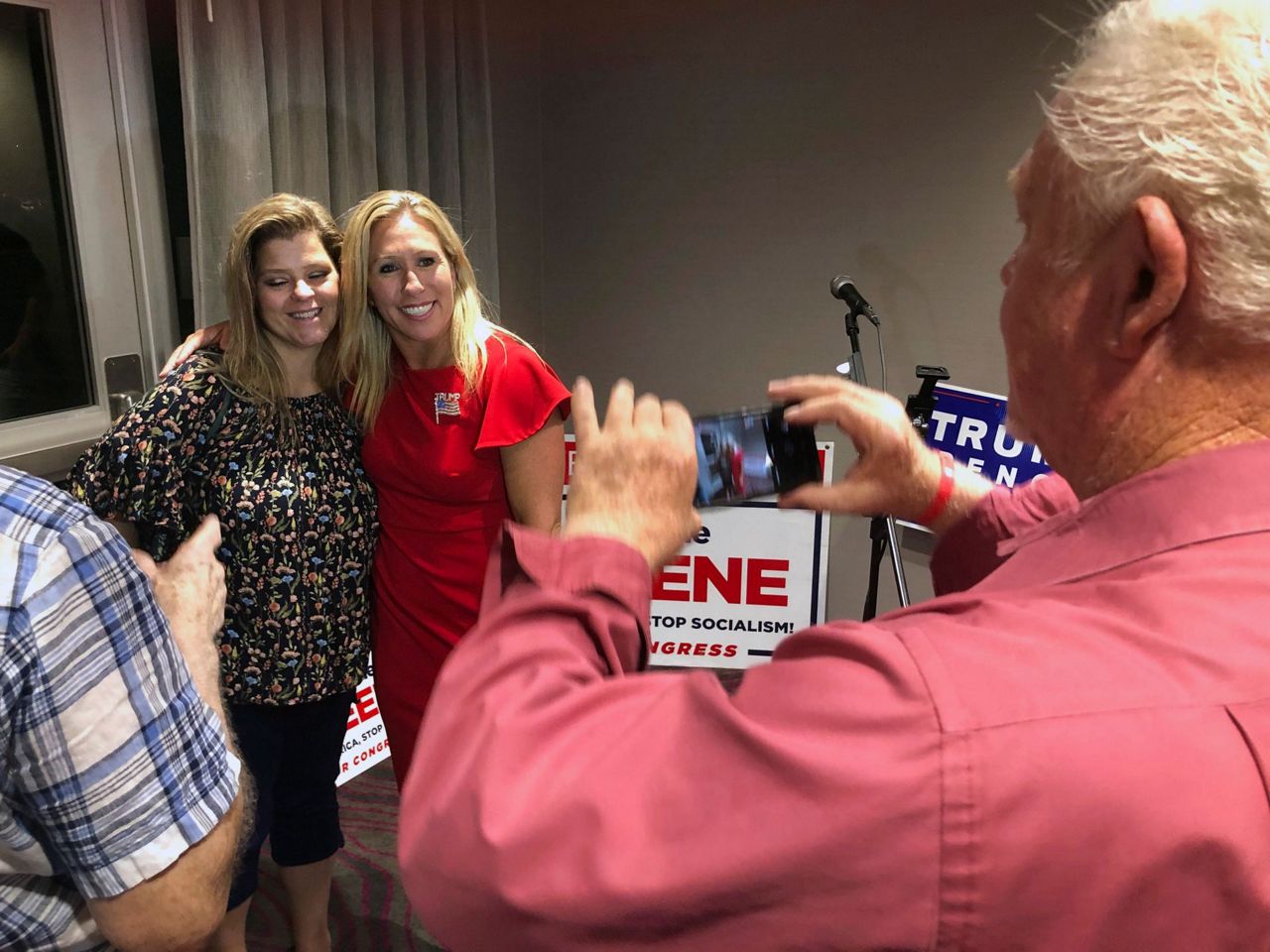 FILE - In this Tuesday, Aug. 11, 2020 file photo, Supporters take photos with construction executive Marjorie Taylor Greene, background right, late in Rome, Ga. The Democratic candidate running against Republican Marjorie Taylor Greene, who has expressed support for the QAnon conspiracy theory and been criticized for other incendiary comments, is dropping out of their race for a U.S. House seat representing northwest Georgia. Democrat Kevin Van Ausdal bowed out of the race on Friday, Sept. 11, 2020. (AP Photo/Mike Stewart, File)

Democratic opponent to QAnon supporter drops out of race

ATLANTA (AP) — The Democratic candidate for an open U.S. House seat in Georgia dropped out of the race Friday, clearing a near-certain path to victory for a QAnon-supporting Republican contender who has been criticized for her incendiary comments.

Deputy Secretary of State Jordan Fuchs said Friday that the window has passed for Democrats to replace Van Ausdal, likely sealing a win for the already-favored Greene. Georgia law says a candidate who withdraws less than 60 days before the election cannot be replaced on the ballot. Van Ausdal faced long odds in Georgia’s deep-red 14th Congressional District. He posted a statement to Twitter on Friday saying, “The next steps in my life are taking me away from Georgia," disqualifying him from the seat.

Greene has become notorious for her remarks about minorities and ethnic groups. In a series of videos unearthed in June, she alleges an “Islamic invasion” of government offices, claims Black and Hispanic men are held back by “gangs and dealing drugs,” and pushes an anti-Semitic conspiracy theory that billionaire philanthropist George Soros, who is Jewish, collaborated with the Nazis.

Most recently, Greene has said mask requirements aimed at controlling the spread of the coronavirus in schools emasculate boys, and posted a photo montage on Facebook showing her posing with a rifle next to three progressive Democratic congresswomen.

Greene also is part of a growing list of candidates who have expressed support for QAnon, the far-right U.S. conspiracy theory popular among some supporters of President Donald Trump.

Greene has expressed strong support for Trump, touting a pro-gun, pro-border wall and anti-abortion message. She has also expressed support for law enforcement and railed against Black Lives Matter protests that have taken place nationwide in recent months in support of racial justice and equality.

After winning her Republican primary runoff in August, Trump tweeted congratulations for Greene, calling her a “future Republican Star.”

In another twist, Republican Rep. Tom Graves, who currently holds the seat, released a statement Friday saying that he intends to step down in October, raising questions about if and how the brief remainder of his current term will be filled.