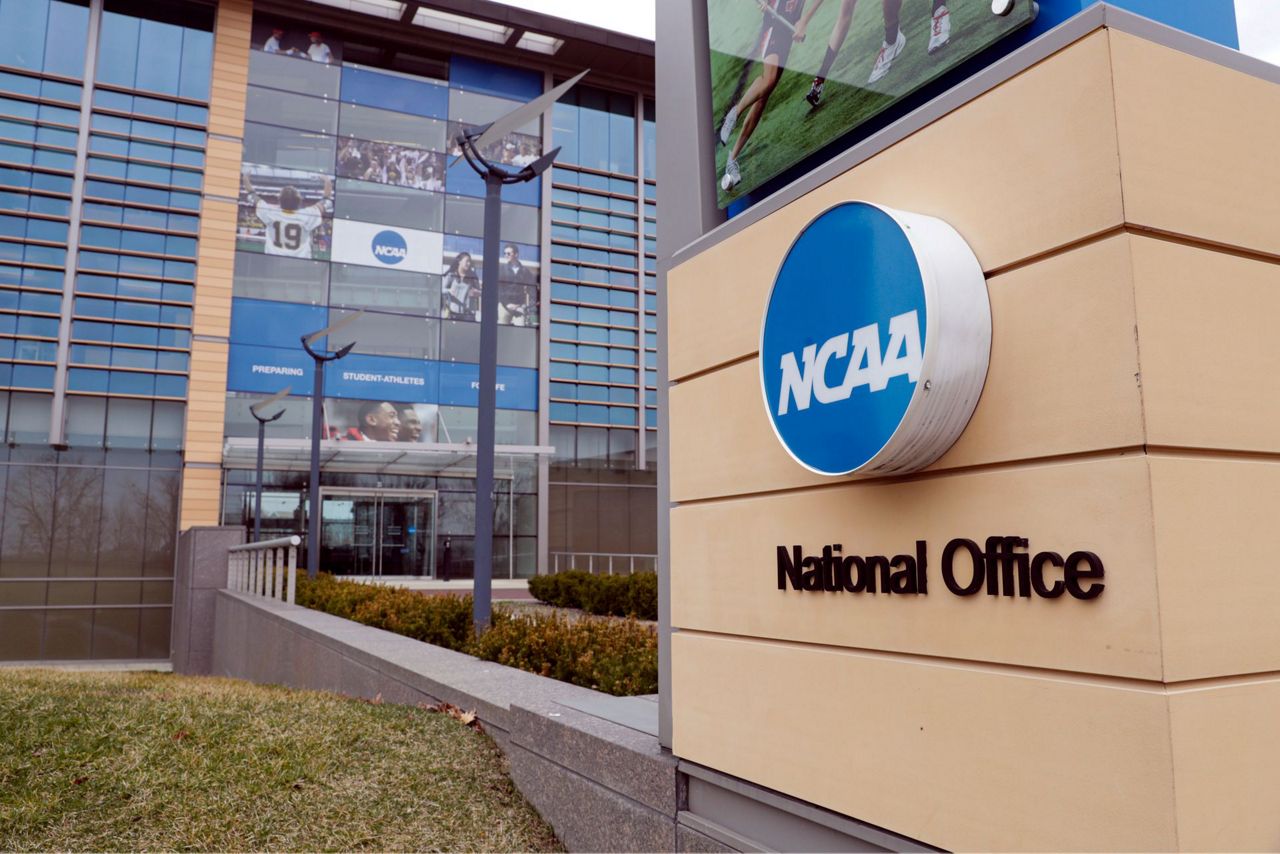 1 of 6
The national office of the NCAA in Indianapolis is shown Thursday, March 12, 2020. The NCAA canceled the men's and women's Division I basketball tournaments amid coronavirus fears on Thursday. (AP Photo/Michael Conroy) 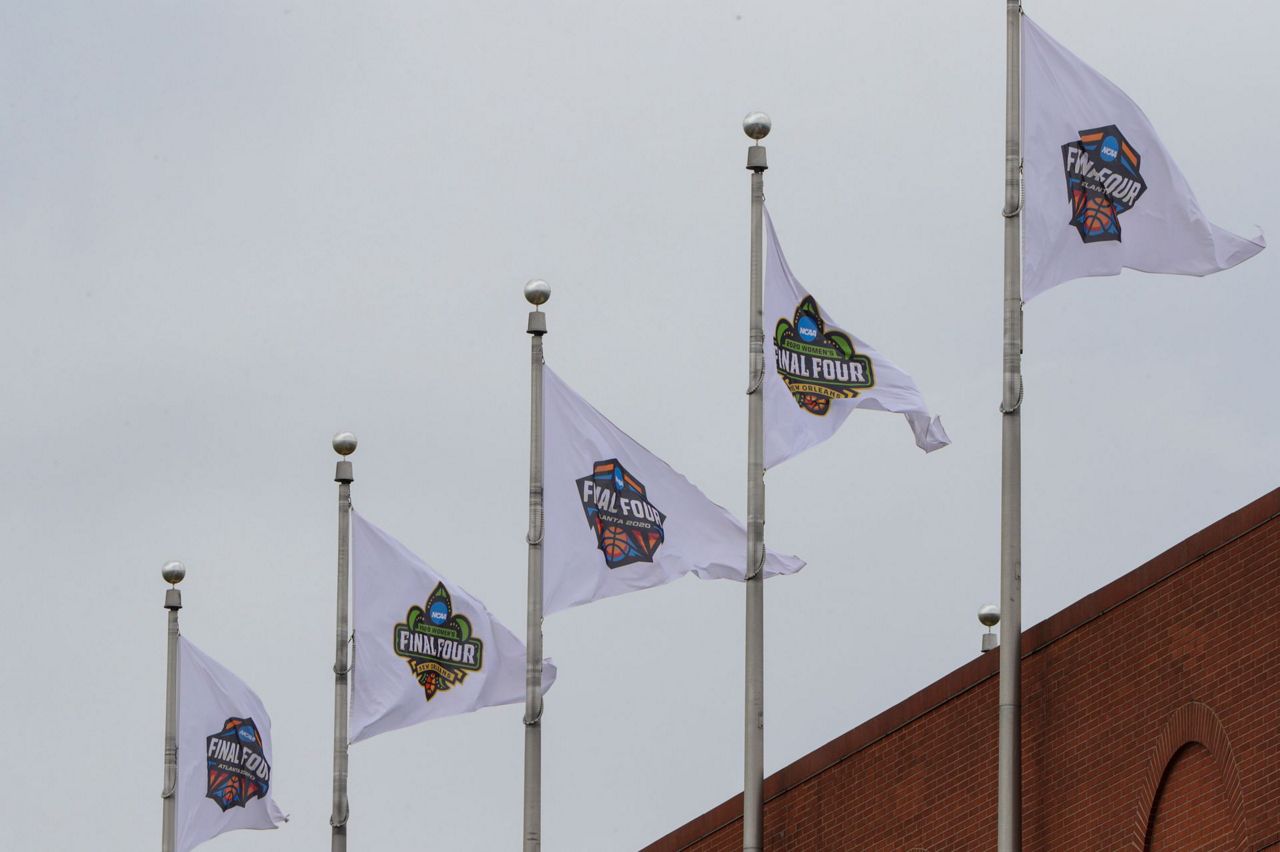 2 of 6
Final Four flags fly over the national office of the NCAA in Indianapolis, Thursday, March 12, 2020. The NCAA canceled the men's and women's Division I basketball tournaments amid coronavirus fears on Thursday, (AP Photo/Michael Conroy) 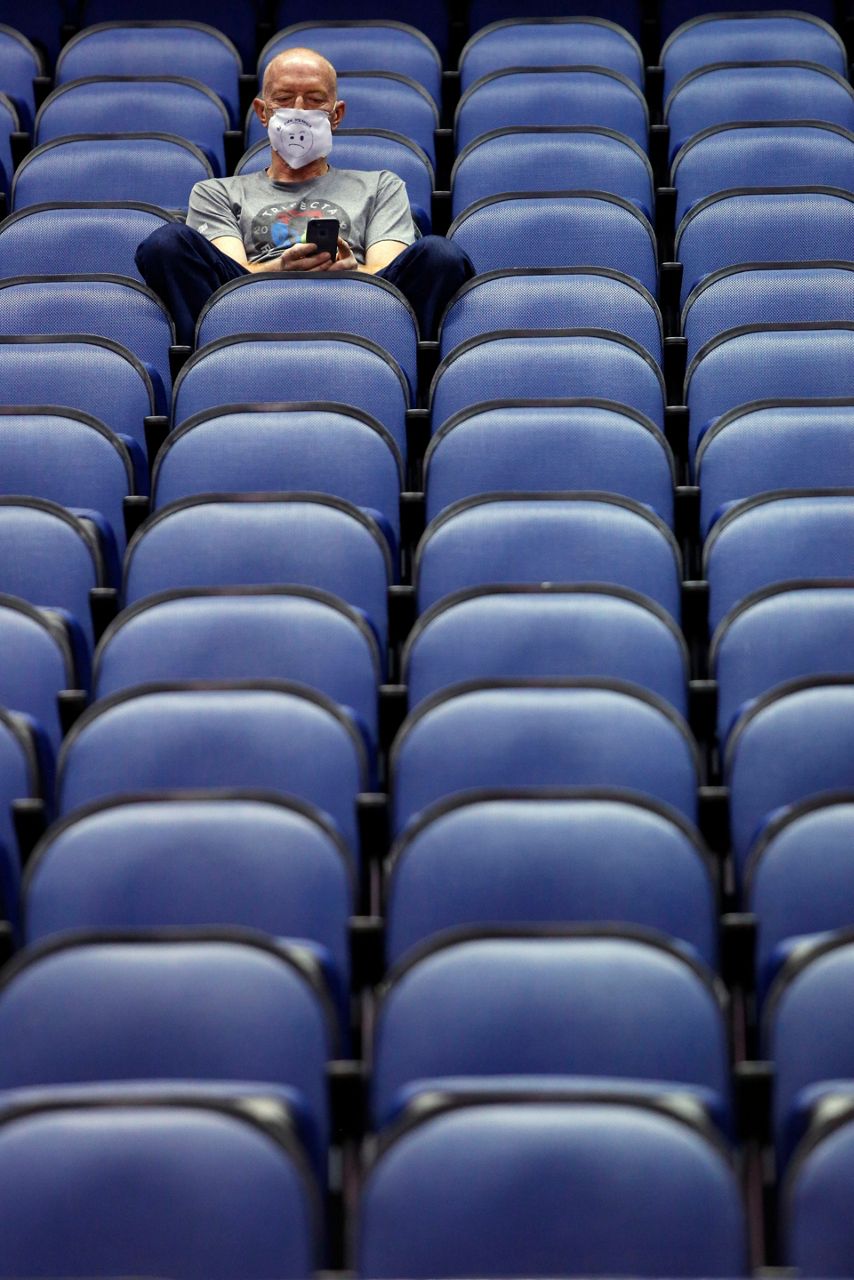 3 of 6
Mike Lemcke, from Richmond, Va., sits in an empty Greensboro Coliseum after the NCAA college basketball games were cancelled at the Atlantic Coast Conference tournament in Greensboro, N.C., Thursday, March 12, 2020. The biggest conferences in college sports all canceled their basketball tournaments because of the new coronavirus, seemingly putting the NCAA Tournament in doubt. (AP Photo/Ben McKeown) 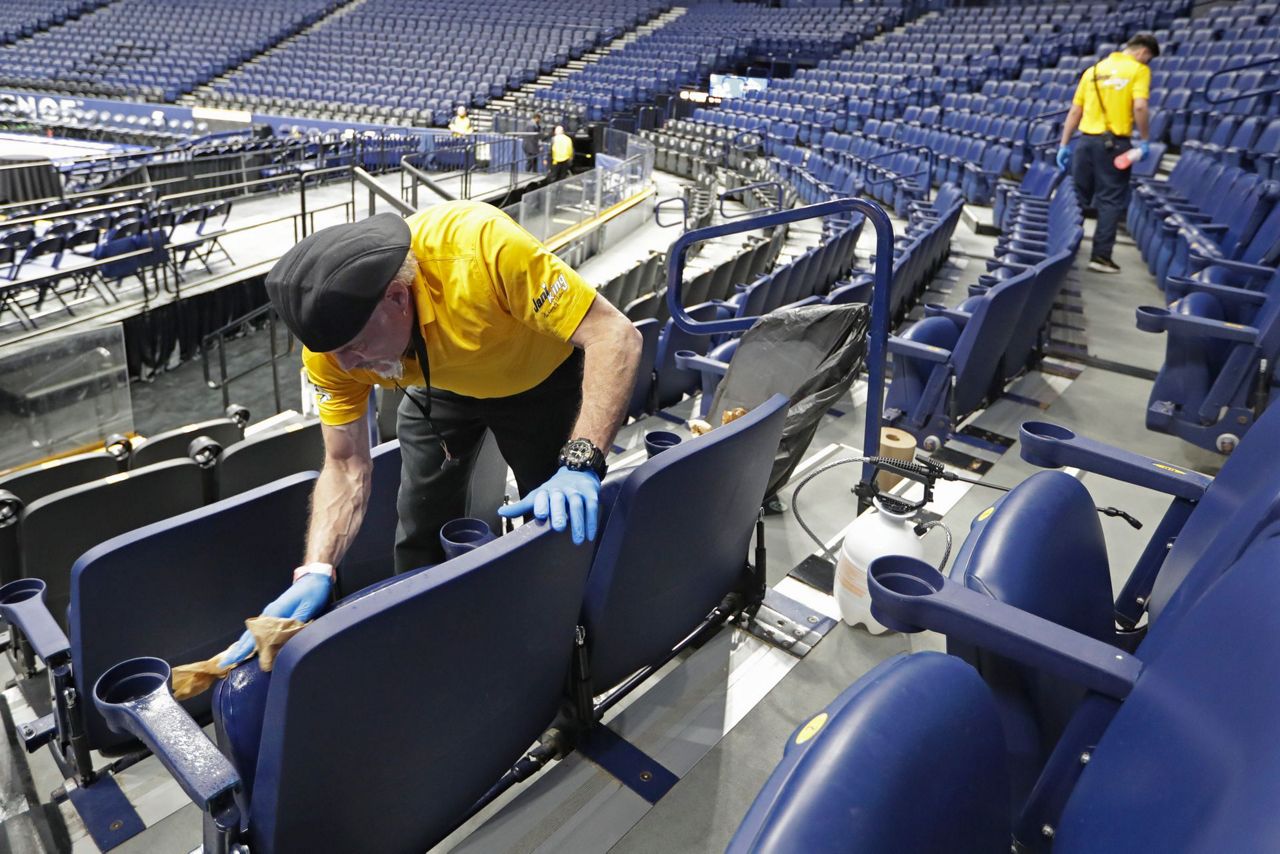 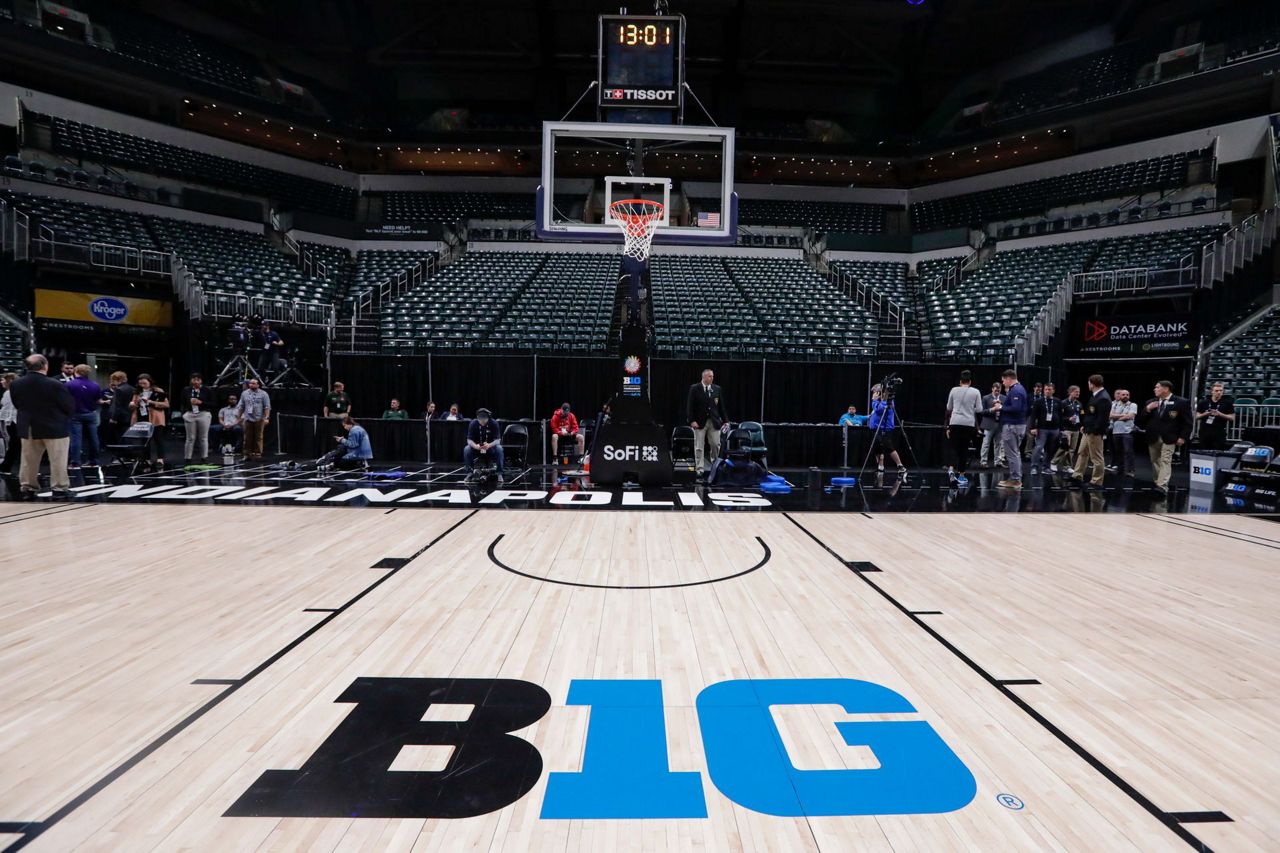 5 of 6
The seating area at Bankers Life Fieldhouse is empty as media and staff mill about, Thursday, March 12, 2020, in Indianapolis, after the Big Ten Conference announced that remainder of the men's NCAA college basketball games tournament was cancelled. (AP Photo/Michael Conroy) 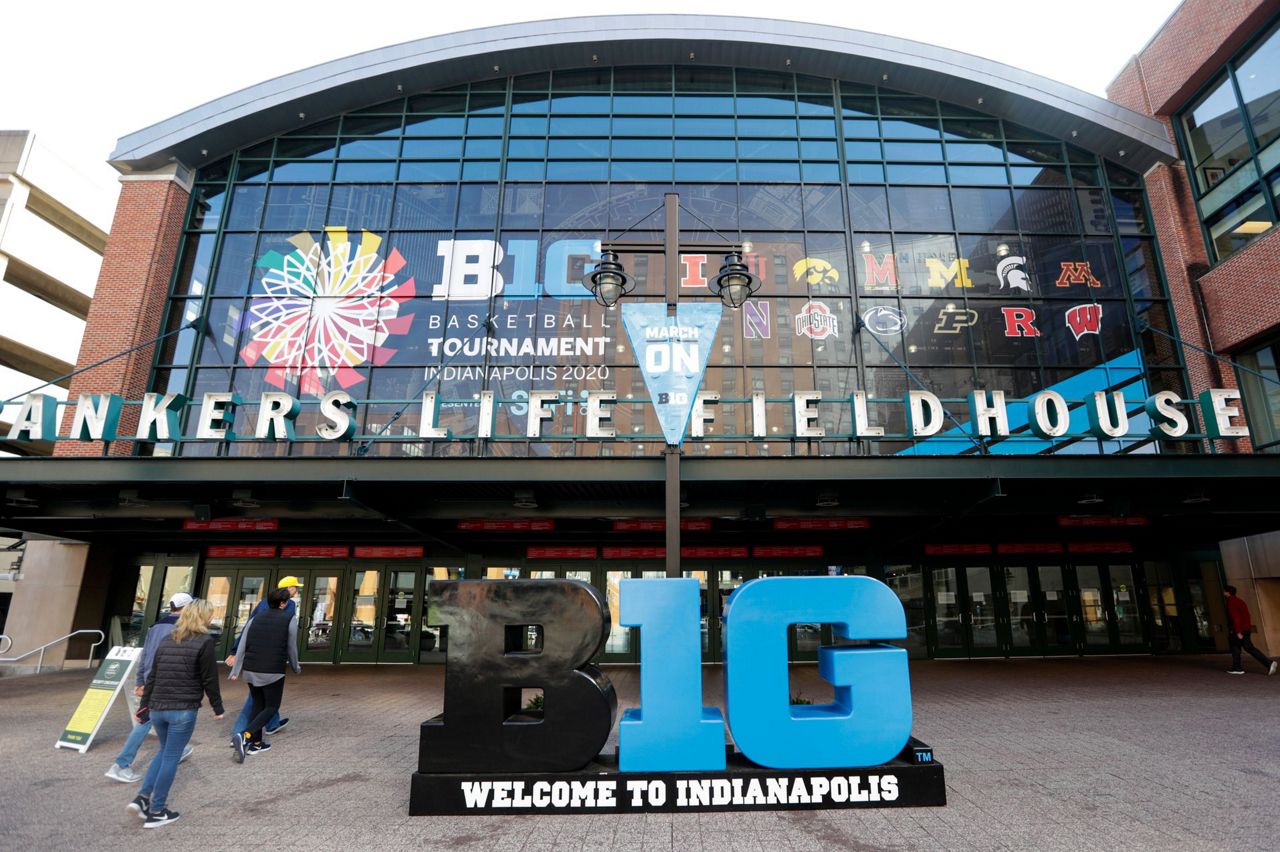 The NCAA canceled its men's and women's basketball tournaments on Thursday because of the spread of coronavirus, putting an abrupt end to the season less than a month before champions were to be crowned.

The unprecedented move comes a day after the NCAA announced the games that were scheduled to start next week would go on, but played in mostly empty arenas. That plan was scrapped as every major American sports league from the NBA to MLB put the brakes on its season due to concerns about the pandemic.

“This decision is based on the evolving COVID-19 public health threat, our ability to ensure the events do not contribute to the spread of the pandemic and the impracticality of hosting such events at any time during the academic year given the ongoing decisions by other entities,” the NCAA said in statement.

The NCAA canceled championships in every spring sport, which include hockey, baseball and lacrosse.

The stunning end to the basketball season came about four hours after a frantic morning when conference tournaments around the country came to a sudden halt. Moments away from tipoff at some arenas, and minutes apart, each Power Five conference canceled its remaining games.

At Madison Square Garden in New York, the Big East game between Creighton and St. John's did start, but at halftime the conference called off that game and all the rest. Turns out that was the last Division I basketball to be played this season.

Smaller conferences followed suit, shutting down their tournaments, and within a few hours 58 men's games scheduled in 16 conferences had been canceled.

Then the conferences began shutting down all athletic activities, for at least a few weeks like the Southeastern Conference, or indefinitely like the Atlantic Coast Conference.

A few hours later, the NCAA put an end to it all.

For most people, the new coronavirus causes only mild or moderate symptoms, such as fever and cough. For some, especially older adults and people with existing health problems, it can cause more severe illness, including pneumonia. The vast majority of people recover from the virus.

The NCAA men's basketball tournament has been played every year since 1939 when Oregon won the championship in Evanston, Illinois. It has grown through the years, both in size and stature. The three-week tournament generates almost a billion dollars in revenue each year for the NCAA and its hundreds of member universities and colleges, most coming from a television contract with CBS and Turner that pays the NCAA almost $800 million annually.

It is now one of the biggest events in American sports, a basketball marathon of buzzer-beaters, upset and thrills involving 68 teams. The field for the men's tournament was scheduled to be announced Sunday, creating the famous bracket that sports fans would obsess over in office pools and at sportsbooks.

The 64-team women's field was to be revealed Monday. The NCAA women's tournament began in 1982 and it, too, has become a big event, raising the profile of the sport.

“I'm disappointed but I totally understand. I really feel for the senior student-athletes; every student athlete, but particularly the seniors because this is their last chance for the fans,” said Oregon women's coach Kelly Graves, whose team would have entered the tournament as favorites to reach the Final Four in New Orleans. “There's something more important than the games going on. I've kind of come to grips to that a little more than a few hours ago."

Games would have started on the men's side on Tuesday in Dayton, Ohio, before spreading out to eight sites from coast-to-coast from next Thursday through Sunday. The women's tournament was scheduled to begin March 20, with first- and second-round games to be played at 16 sites on or near the campuses of the top teams.

The men's Final Four was to be played April 4 and 6 at Mercedes-Benz Stadium in Atlanta. The semifinals and final typically pack football stadiums for the games, and after the champion is crowned the best moments of the year's tournament are wrapped up into the “One Shining Moment” montage that has become a staple of CBS' television coverage through the years.

Instead, March Madness took on a different meaning as sports have virtually shut down.