Honolulu one of three cities 'most improved' in climate action, report says

HONOLULU — The City and County of Honolulu closed out 2021 on a high note after being recognized as one of three “most improved” cities in a national City Clean Energy Scorecard, according to a news release.

The report based its conclusions on actions taken to mitigate a city's contribution toward climate change.

The American Council for an Energy-Efficient Economy is a nonprofit research organization that annually reports its findings based on surveys of 100 major U.S. cities using the scorecard. The organization develops policies to reduce energy waste and combat change.

Actions taken in clean energy and transportation projects, efforts to improve resiliency, support equity and aid in economic recovery counted toward Honolulu’s jump from its 41st spot in 2020 to number 24 in 2021. According to the survey, it’s the only city that improved its scores in all policy areas. It ranked 47th in 2019.

“Increasing our scorecard ranking by such a significant amount is exciting progress that couldn’t have been achieved without the collaborative vision and commitment of community, city leadership and departments,” said Matthew Gonser, director and chief resilience officer of the Office of Climate Change, Sustainability and Resiliency. “We are inspired by the innovation of the cities included in this report and appreciate the provided recommendations. Honolulu has made great progress in recent years, and as we look ahead to 2022, we know we can accomplish so much more together.”

The city worked with community partners and across departments to implement initiatives such as “streamlining parking requirements, expanding safe and clean transportation options for residents, upgrading city facilities through an Energy Service Company partnership, adopting EV and PV-ready energy codes for homes and businesses, bringing electric vehicles into the city fleet, and measuring energy and water use, i.e. benchmarking, in city facilities,” according to the release. 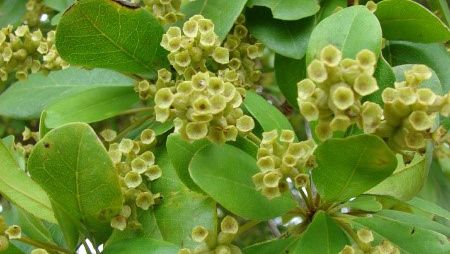 The flowers of a Geometry tree, one of 44 trees planted in the Downtown/Chinatown area in October as a way of creating a greener and cooler urban core. (Honolulu Dept. of Parks & Recreation)

“We’re proud to contribute to reducing Honolulu’s greenhouse gas emissions by increasing green and energy-efficient transportation infrastructure,” said Roger Morton, department of transportation services director. “With rail, protected bike lanes, the start of the electrification of our bus fleet, and the push for more multimodal transportation options, we have a lot to look forward to when it comes to cleaner transit.”

Mayor Rick Blangiardi released the Climate Action Plan in April 2021, which provides details on “additional programs, policies and actions that Oahu can take to reduce greenhouse gas emissions by 45% in targeted sectors over the next five years and put the city on the path to carbon neutrality by 2045.”

According to the scorecard, “Honolulu performed best in the energy and water utilities category. The city rose significantly in the rankings this year, but can improve across multiple policy areas to advance its rank in the next edition of the Scorecard, most notably in community-wide initiatives and local government operations.”

The city encourages residents to join the effort by visiting the Hawaii Energy website for money-saving tips, incentives and rebates to reduce home or business energy consumption.

Early this year, the city will be announcing additional initiatives and progress toward energy-saving projects, a new electric bus fleet and new Better Buildings Benchmarking program.