Volunteers from the esports programs of the University of Hawaii System and Hawaii Pacific University played an exhibition of League of Legends to showcase the potential of the new TRUE Esports + Tech Lab at the Waipahu Public Library on July 14. (Spectrum News/Brian McInnis)

WAIPAHU — The burgeoning esports scene in Hawaii received a two-pronged push toward prominence over the last several days.

As a team of 12 public and private entities unveiled what they hoped will be a community-based pathway for tech careers with a new gaming hub at the Waipahu Public Library, the University of Hawaii prepared to pull off a second straight summer of hosting duties for a top-tier professional esports event.

Gov. David Ige and other VIPs were on hand for the July 14 dedication of five high-end gaming rigs in a dedicated space for a new form of learning. The computers will remain in Waipahu for the community, particularly high school-aged youths, to train in team-based games like League of Legends and learn associated skills like coding and esports content creation.

The TRUE Initiative, part of the Hawaii Executive Collaborative, donated the equipment at a cost of an estimated $10,000.

Ten esports team members from UH Manoa, Hawaii Pacific University and UH West Oahu teamed up to play a 5-on-5 exhibition match of League of Legends in a dedicated gaming room as the action was streamed live online and on screens in the main chamber of the library to about 100 people, including the governor. Moments earlier, Ige told assembled enthusiasts that he’d wanted to be “the next great game developer” as he learned how to code on an old Atari system in high school.

Better that the current generation now have that opportunity instead, he concluded with a smile. 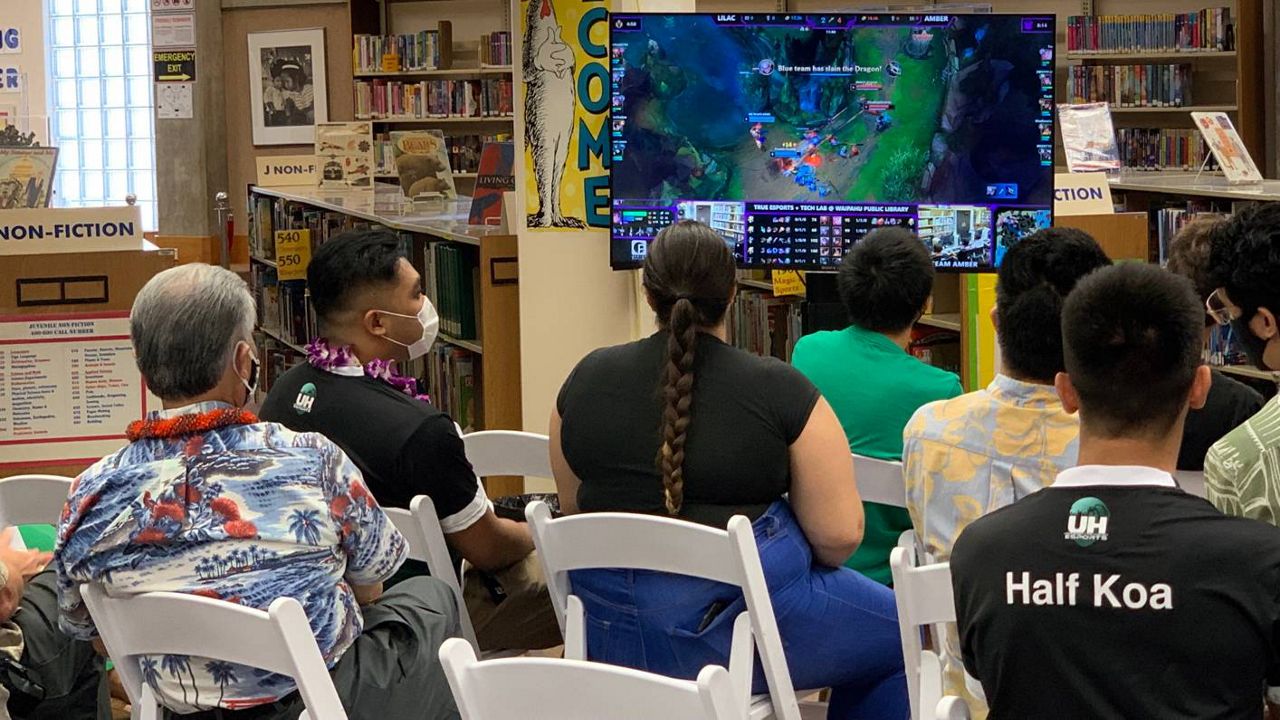 Gov. David Ige, left, was among the several dozen spectators of a livestreamed League of Legends match held at the Waipahu Public Library as a demonstration of the potential for a new esports venture. (Spectrum News/Brian McInnis)

“To have this on a grander scale, to have people see this, especially Gov. Ige, highlights what is possible here,” UH Esports program director Sky Kauweloa told Spectrum News at the dedication.

“My first impressions are, No. 1, people are interested,” he said. “Even if it’s something that they’re still trying to learn and still trying to wrap their minds around. They understand that games and esports offer a pathway, an entry point into technology that you don’t find in other activities.”

As the dedication was playing out, Kauweloa was in the process of overseeing the return of the Overwatch League to Hawaii for cross-Pacific competitive play in the “Midsummer Madness” tournament with a purse of $1 million.

Kelly Ueoka, president of Hawaii-based technology company Pacxa, is a former football and track athlete at Southern Oregon—and also happens to be a lifelong gamer. He started on the Commodore 64 and has evolved with the times to the point that for the last five years, he’s played competitively in League of Legends, a multiplayer online battle arena game, in his spare time.

Ueoka said the Hawaii State Public Library System came to TRUE, of which he is a board member, to look at digital and tech options to increase community involvement. A free, publicly accessible hub for esports-capable gaming machines—which can be cost-prohibitive when factoring in the hardware, software and connectivity—came to mind.

“I wonder what I would have done had this opportunity been available to me back in the early to mid ‘90s,” Ueoka told Spectrum News about 30 minutes before he hopped on the League of Legends stream to provide color commentary as “Team Lilac” and “Team Amber” battled it out. 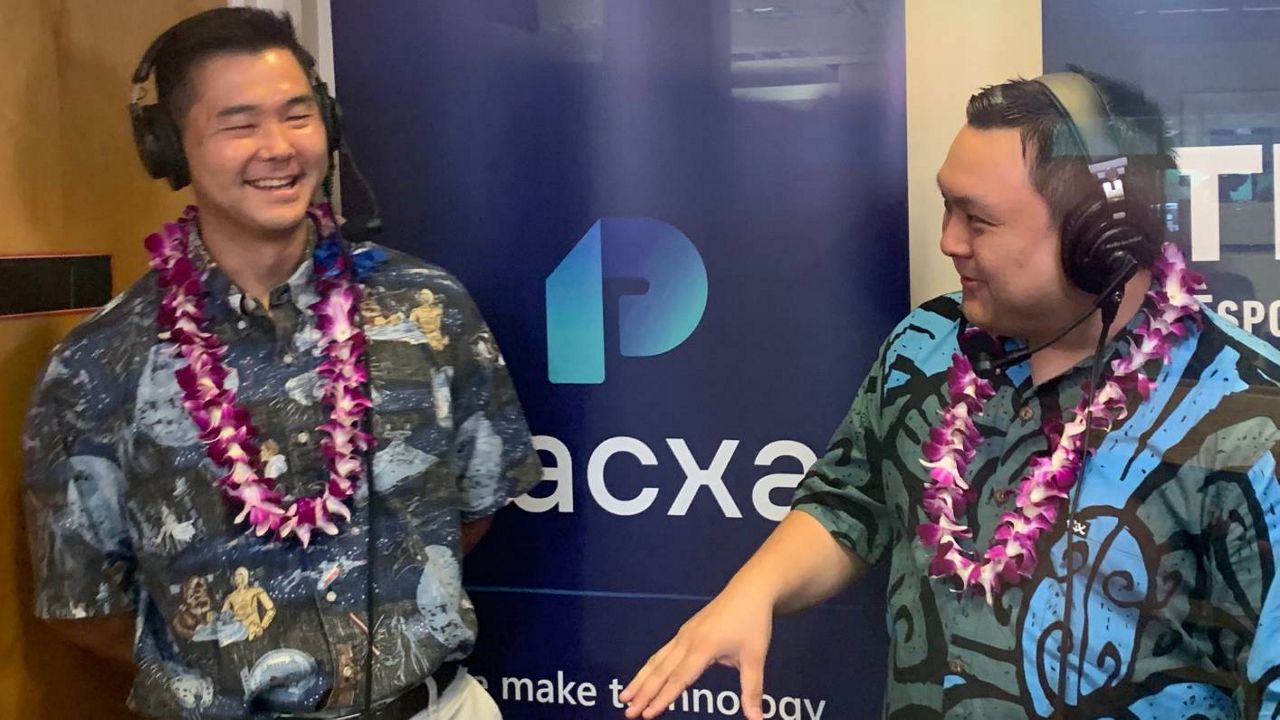 Pacxa President Kelly Ueoka, left, and Kyler Tandal from EMP Live called the action on the livestream of a League of Legends game at the Waipahu Public Library. (Spectrum News/Brian McInnis)

“With that, I was thinking about the accessibility portion of this project. It is meant to expose high school students to the art of what’s possible through technology.”

He acknowledged that those who make it big in esports are few and far between, as in mainstream sports.

“However, what goes into esports (includes) creating content and then also producing events, and it is a full-time career in technology,” Ueoka said. “So, the opportunities are massive.” He noted Microsoft’s recent purchase of publisher Activision Blizzard for a whopping $68.7 billion. (Activision Blizzard operates the Overwatch League.)

The Hawaii State Public Library System, behind leader Stacey Aldrich, hopes to replicate over time the setup where possible at the state’s other 50 public libraries, which vary widely in size and infrastructure.

Staff members are being trained to oversee the hub at Waipahu, which had its internet bandwidth recently upgraded to a gigabyte. It made sense as the pilot site because it had a ready-made room sequestered from the rest of the library; fired-up gamers tend to make noise.

“The way we look at this is, can we create this ‘YMCA’ version of esports and have kids playing each other all across the state through their public libraries so they can be competitive and they can move up,” Aldrich said. “It’s a place to start, and we’re excited about that.” 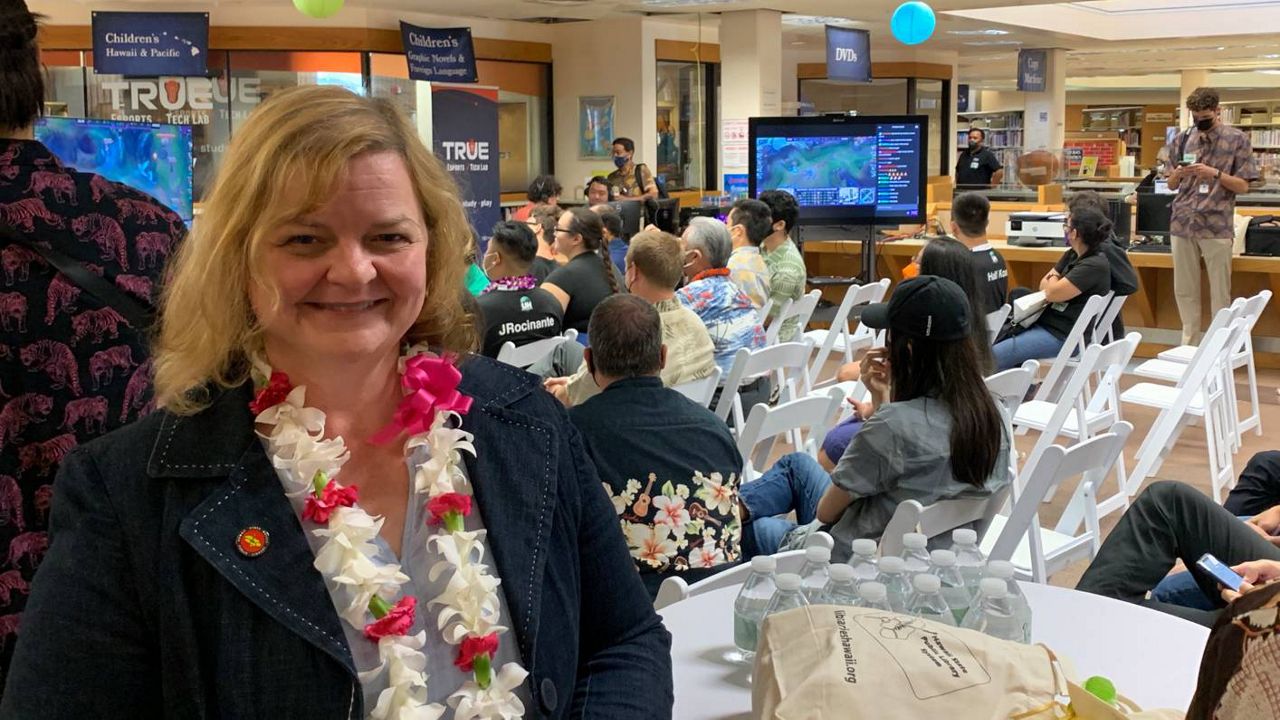 Hawaii State Librarian Stacey Aldrich hopes to evolve libraries into a place of digital learning and collecting, including for esports. (Spectrum News/Brian McInnis)

The Waipahu esports hub officially opens to the public on July 27, she said. Future library sites are to be determined, but she said Yonamine is enthusiastic to add more locations.

Meanwhile, UH, with a crew of a dozen or more student interns in its improved esports arena, set about hosting the Overwatch League in Overwatch 2 competition. Just as it did in the summer of 2021, the Manoa campus can serve as a convenient conduit for OWL’s North American teams to play remotely against their Asia counterparts via undersea fiber optic cable amid the ongoing pandemic.

Six North American teams are playing from Hawaii for this event. Play began on Tuesday and concludes with the tournament’s grand final on Saturday, broadcast live on OWL’s YouTube channel at 2:30 p.m. Hawaii time.

Besides the prize money—the winning franchise wins $500,000—qualifying points toward the end-of-season playoffs are on the line.

It’s given Kauweloa another piece of evidence for a thesis he's crafted over the last several years.

“Hawaii can be a genuine, legit location to run multimillion dollar tournaments from,” he said.