An aperture of Aloha Stadium in 2019 for the Los Angeles Rams' preseason exhibition against the Dallas Cowboys. (AP Photo/Mark J. Terrill)

HONOLULU — Gov. David Ige cleared the way Wednesday for $400 million of state money to be applied toward a new stadium in Halawa, an essential step for the repeatedly delayed project.

Ige’s support for the New Aloha Stadium Entertainment District — he did not include it in his budgetary line-item vetoes for House Bill 1600 — came as a relief to stadium proponents like state Sen. Glenn Wakai, whose purview includes the 98-acre Halawa site of the condemned Aloha Stadium and future mixed-use NASED project.

Wakai had considered it a “50-50 chance” that Ige, who has a history of tepid support for a new stadium, would veto the money.

“It was monumentally important,” Wakai told Spectrum News in a phone interview. “If the governor vetoed it, we would’ve been dead in the water. So, it was imperative that he allow the Bill 1600 to go through with the stadium funding.”

Ige announced his intention to sign the Supplemental Appropriations Act of 2022 on Thursday. It includes previously committed $350 million for stadium construction, plus $49.5 million for financing and planning.

The updated best-case timetable for the new stadium, Wakai said, would call for construction to begin in mid-to-late 2023 following the demolition of the existing 50,000-seat stadium — putting its opening in late 2025.

That’s with the caveat that the stadium Request For Proposals goes out in the near future; back in 2019, the NASED stadium was initially projected to be completed in late 2023. Three finalists have awaited the RFP to make a bid: Aloha Stadium District Partners, Aloha Stadium Hui Hilina‘i and Waiola Development Partners.

Curt Otaguro, Comptroller of the state Department of Accounting and General Services, told Spectrum News in a phone interview Wednesday that he’d been confident that Ige would approve the stadium budget money and that the three development teams are still on board for the “Shark Tank”-style bidding process.

But an environmental impact statement must be generated before the RFP goes out, Otaguro said, with his latest estimate for the RFP coming “a couple months” from now.

“We have that (EIS) draft in front of (Ige) … so we’ve just got to do some technical evaluations to make sure everything is current and accurate, then present that to the governor for final consideration to publish,” Otaguro said. “With that, then the developers would have a good foundation to receive a RFP and understand what we’re trying to do.”

The RFP for the real estate component of NASED went out in late January, after a delay from December. The RFP for the stadium was conspicuously absent. Otaguro said it was being withheld while the state funding remained in question.

Otaguro told Spectrum News in February that supply chain issues and associated rising costs have altered the stadium’s plans and wish-list items over time. For example, the initial plans called for a 35,000-seat facility. Those plans are now at 30,000 seats or fewer, but he said Wednesday that it will be “still functional, still state-of-the-art, high-tech" with other groups like soccer and esports interested in its use. 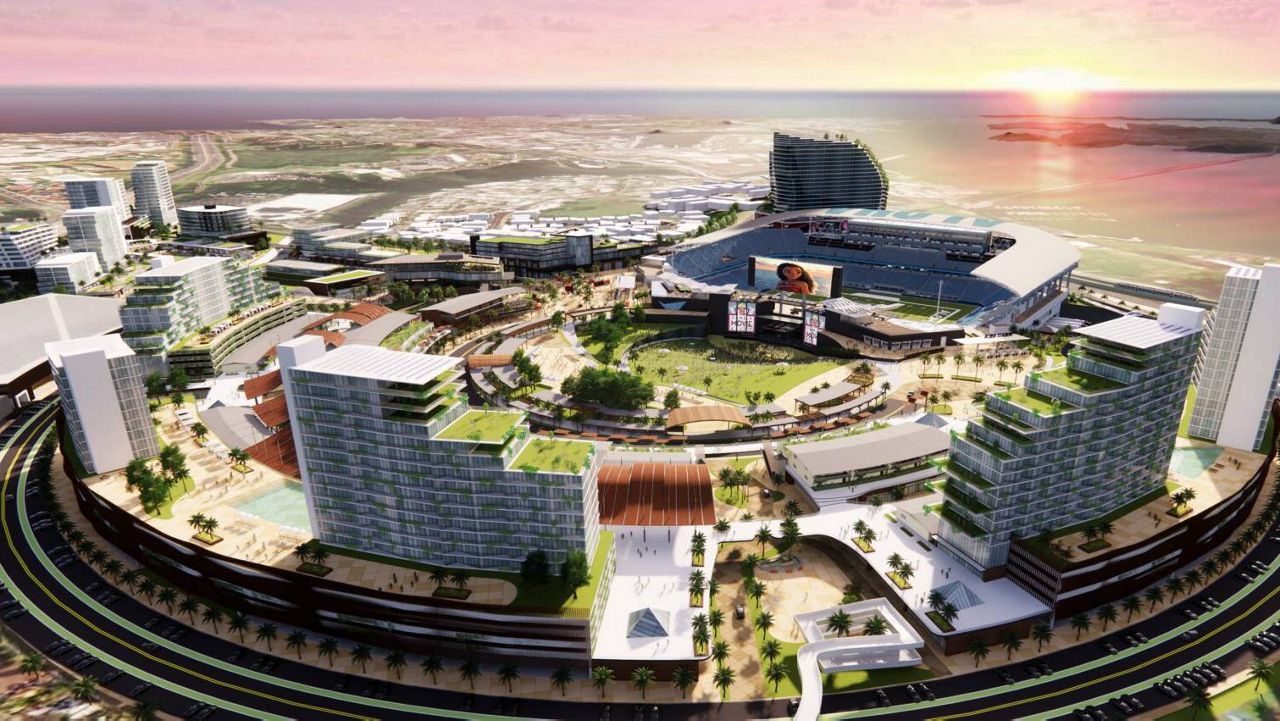 A rendering of the NASED project released in 2019, before pandemic-related cost increases, contributed to the multi-year delay of the stadium Request For Proposals process. (NASED/Crawford Architects)

The financial maneuvering comes at a time of high uncertainty for the University of Hawaii football program, the former primary tenant of the old Aloha Stadium that is playing its games on campus for the foreseeable future. Beyond the sustainability challenges of playing at the 9,000-seat Clarence T.C. Ching Athletics Complex, UH faces the prospect of a looming cascade of conference realignment.

“Speed is of the essence now,” Otaguro said. “It’s high stakes for UH. Now is the time. As I’ve said, we’re at a crossroads. It’s even more crucial now. Now we know what we can do — it’s a matter of can we do it, and how quickly.”

Attorney Jeff Portnoy, a former member of the UH Board of Regents, has been frustrated by the lack of foresight by the legislature and the university of the end of the useful lifespan of corroding Aloha Stadium.

“I think (Wednesday’s budget approval) is a small step that’s been taken way too late,” Portnoy said. “But it’s a start. Whether it can be completed in time to save Division I football at the university with all that’s going on externally is a very serious question.”