A new Net Bin at the Waikaea boat launch ramp in Kapaa. Harbor Master Mana Brown stands with his family at the installation of the Net Bin. (Courtesy Surfrider Foundation)

The nonprofit Surfrider Foundation and the state agency Division of Boating and Ocean Recreation teamed up together to place large bins at multiple harbors on Kauai so that fishers can discard fishing line, nets and ropes they no longer use or found at sea.

Discarded fishing nets are a major ocean polluter and often entangle and kill marine life, such as turtles, seals and whales.

“We encourage the fishers help in both not throwing stuff in the ocean and in removing it from the ocean if they encounter it,” said Carl Berg, who is the project lead for the Kauai chapter of the Surfrider Foundation's marine debris program, in an email to Spectrum News Hawaii.

Berg said tour boat operators for whale watching, diving and sunset cruises have also been supportive and often engage their clients in helping to collect marine debris from the ocean.

In mid-December 2020, the large bins were stationed at Port Allen and Nawiliwili small boat harbors. During the first year, heavy ropes and fishing nets weighing a total of 960 pounds as well as heavy-duty monofilament fishing lines weighing 80.5 pounds were collected. Surfrider estimated in a press release that the monofilament fishing line amounted to more than 11 miles of line.

After a successful first year, additional bins were placed in March at Waikaea boat ramp and Kikiaola harbor on Kauai to encourage fishers to appropriately discard derelict fishing gear. Berg said that these bins have already collected large amounts of monofilament. 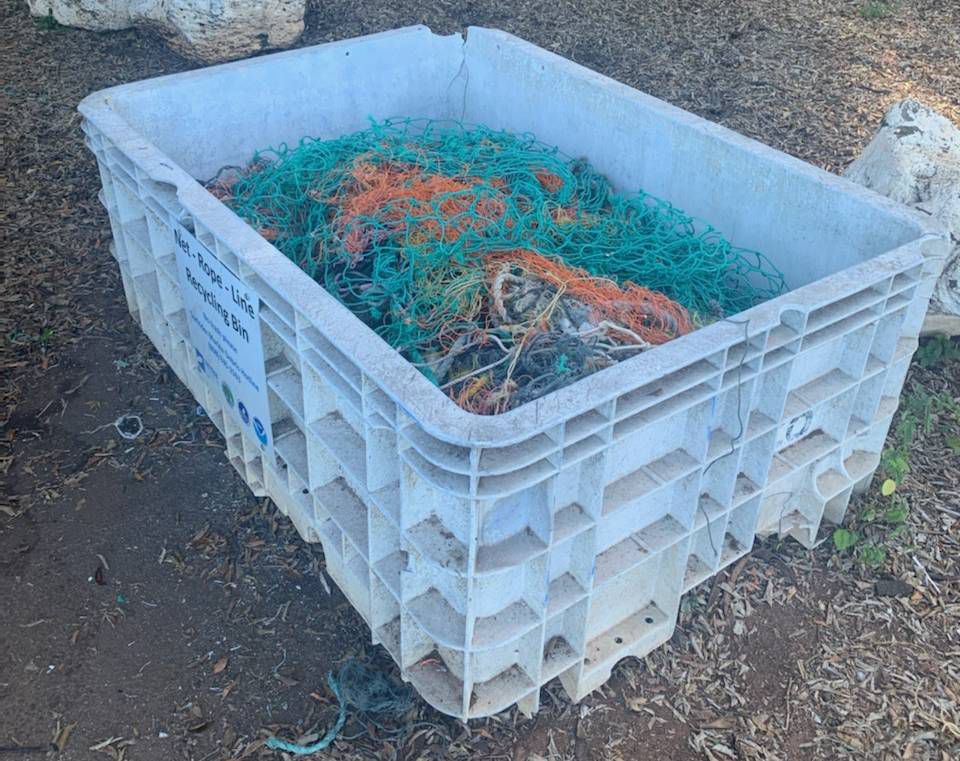 The large bins used to collect the fishing gear were repurposed after washing onshore — many of them following the tsunami in Japan.

“It is our understanding that these bins are for holding iced fish on board large commercial fishing vessels,” said Berg.

Berg said, along with the help of DOBAR, the project was supported by a NOAA Large Marine Debris grant that Surfrider Foundation shares with the Hawaii Wildlife Fund, who have similar collection bins stationed on other islands.

Once collected, the Surfrider Foundation makes more than 100,000 pounds of nets, ropes and buoys available to the public to be used by anyone, including ByFusion, a company that turned plastic waste into Lego-like blocks, which were used to build a school’s athletic pavilion. The rest of the derelict fishing gear is eventually taken to the landfill.

“We have participated in a variety of recycling programs in the past and in sending the stuff to H-Power, but the carbon footprint of shipping and of all those activities far outweighs any economic benefit. Plus recycled plastic continues to release toxic material and nano-particles that end up in our lungs and our blood,” said Berg. “We eventually send it to the landfill. That is the least harmful method of disposing of it.”

Correction: Carl Berg's title has been changed to reflect his role as the project lead for the Kauai chapter of the Surfrider Foundation's marine debris program. Also, the story originally said that the bins at Port Allen and Nawiliwili small boat harbors collected more than 100 pounds of fishing rope, lines and nets, but this has been corrected to say they collect more than 1,000 pounds.