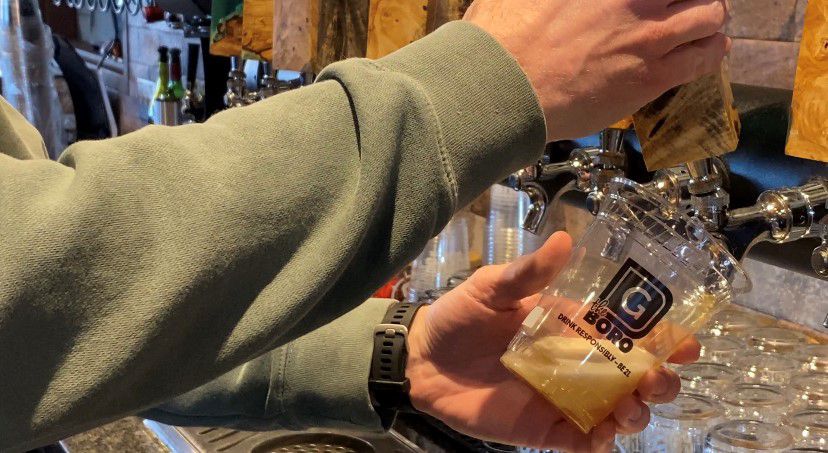 Seth Kevorkian, owner of Southend Brewing in downtown Greensboro, pours in a BORO cup used for drinks that can be carried around the new downtown social district. (Photo: Courtney Wallen)

GREENSBORO, N.C. — The city of Greensboro launched a new program that allows people to stroll around downtown while drinking alcoholic beverages.

City leaders launched the Border of Refreshments Outdoors, or BORO, program on March 1.

People can purchase drinks at one of the participating businesses and enjoy within the designated area downtown. All drinks must be served in the official BORO cup.

Co-owner of Southend Brewing Seth Kevorkian looks forward to seeing how this will impact business.

“We’re excited, we’re looking forward to what this might mean, but we don’t entirely know what to expect just yet, so we’re ready for it either way,” Kevorkian said.

Southend Brewing is one of 20 restaurants, stores and bars in downtown Greensboro where people can purchase BORO drinks. Visitors can take their drinks with them through the BORO district between 12 p.m. and 9 p.m. each day. Another 11 restaurants and businesses will allow visitors to bring their drinks in stores.

Kevorkian, who opened Southend Brewing in 2019, is concerned customers may try to bring in BORO drinks purchased at other locations, though that is not allowed at his business. However, he hopes this program will help build the growing downtown area.

“The more opportunity people have to get downtown and mingle and with this specific rule it lets people take something somewhere and walk out onto the streets, so if you’re not comfortable hanging out in the crowded taproom or patio, you can grab a drink and go anywhere up the street and you’ve got plenty of room to move around,” Kevorkian said.

Gov. Roy Cooper signed a bill in September 2021 allowing cities to create their own social districts. Greensboro is the second city in North Carolina to launch one. Kannapolis launched its program in October 2021.