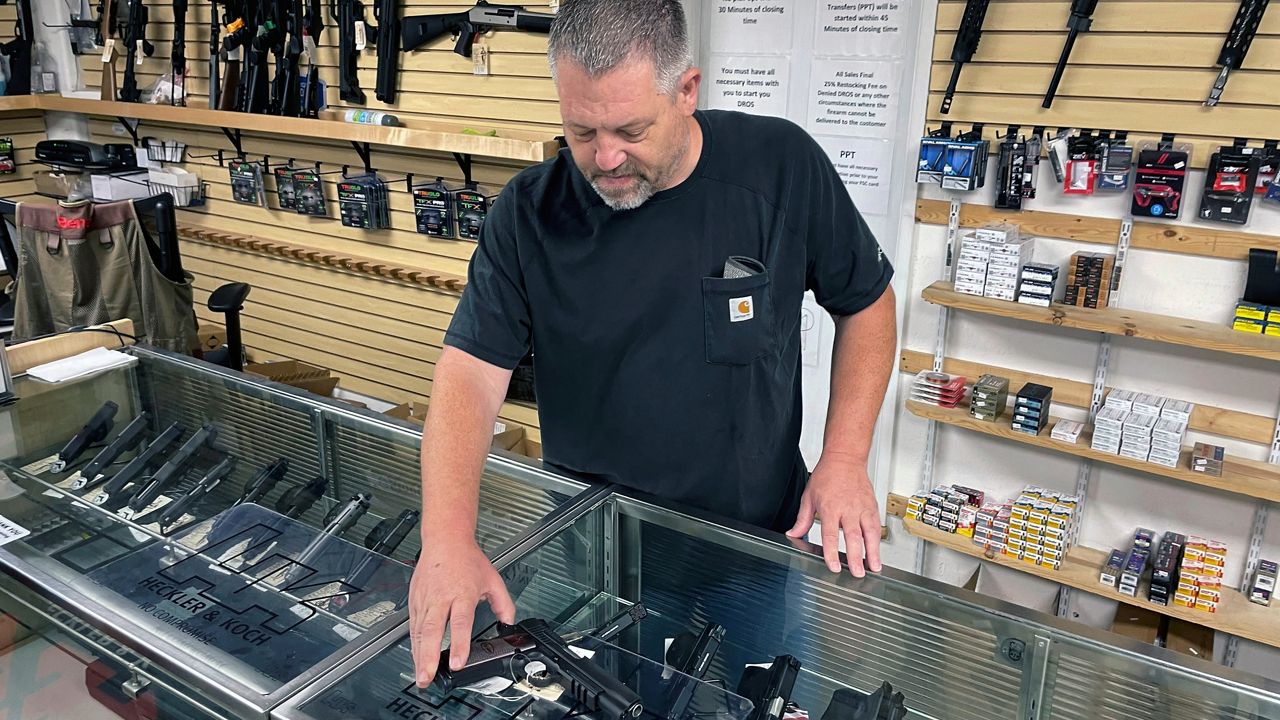 John Parkin, co-owner of Coyote Point Armory displays a handgun at his store in Burlingame, Calif., June 23, 2022. In response to the U.S. Supreme Court's ruling that allows more people to carry concealed weapons, California lawmakers, on Tuesday, June 28, 2022, moved to boost requirements and limit where firearms may be carried while staying within the high court's ruling. (AP Photo/Haven Daley, File)

A look into increasing gun violence in Texas

AUSTIN, Texas — Gun violence has been going up in recent years. Some people point to easy access to guns; others say it’s because the state isn’t keeping felons in jail.

In Texas, people who are over 21 can carry a handgun in public without a license. Background checks and training are not required for most people in the state. Lax gun laws have earned Texas an “F” grade from the Giffords Law Center, an organization dedicated to saving lives from gun violence.

“Texas has also been moving unfortunately in the wrong direction, passing really dangerous laws that put residents at risk,” said Kelly Drane, a research director with the Giffords Law Center.

In a Giffords Law Center article, the author wrote, “Gun homicides overall have increased steadily in Texas over the last decade, rising over 90% from 2011 to 2020.”

“Part of the gun violence problem in our country is simply that it is too easy for people who want to cause harm to access incredibly lethal weapons,” Drane said.

“This is a problem that’s affected almost every state,” she said. “It’s affected urban and rural areas; the very largest cities, the very smallest cities; cities that are led by Republicans, cities that are led by Democrats... I think when we’re looking at causes of these increases, we need to be looking a little bit beyond the local level. Like these are massive increases, particularly in gun homicides–which were 35% higher from 2019 to 2020. That’s the largest one-year increase on record.”

While she attributes an increase in gun violence to easy access, Douglas Griffith, the president of the Houston Police Officers’ Union, says it’s due to bail reform. In 2018, Harris County began releasing inmates who were charged with misdemeanors with no bond, a low bond, or a personal recognizance bond. Griffith said that slowly started to include defendants charged with felonies.

According to Harris County Crime Stoppers, since 2018, felony defendants who were released on bond have murdered 177 people in the Houston-area.

“When you have a violent offender that uses a weapon and is given a low bond, and then goes out and commits another felony with a weapon, that shows right there that’s where the gun violence is coming,” Griffith said. “And if we don’t lock them up and put them in prison where they belong, we are going to see this gun violence.”

He says the courts need to revoke bonds for felony defendants, issue arrest warrants, and bring them to court. He thinks that’ll take dangerous people off the streets of Texas and lower gun violence numbers.

“Our court’s not doing their job. Our judge is not doing their job. We’ve got to hold people accountable,” Griffith said. “It used to be, if you were convicted of a violent crime with a gun, you had to do at least half your sentence before you’re ever eligible for parole. We have to go back to that. We have to have some teeth. Everybody talks about how we need more gun laws. We just have to enforce the ones we have, and we have to stick to them.”

“Many of these studies show that reforming bail policies and increasing the number of people released pre-trial is not associated with large-scale increases in crime,” she said.

Either way, Drane encourages Texans to acknowledge that there’s a problem, regardless of where it stems from.

“We see these horrific incidents like Uvalde and Highland Park and Buffalo, and they sort of bring our attention to this issue for a moment,” Drane said. “But it is important to remember that gun violence takes 110 lives every day, and it is now the leading cause of death among children. And more Americans are dying from gun violence than in car accidents. And so I think, you know, just really acknowledging the immense scope that this epidemic takes on our country is really important.”