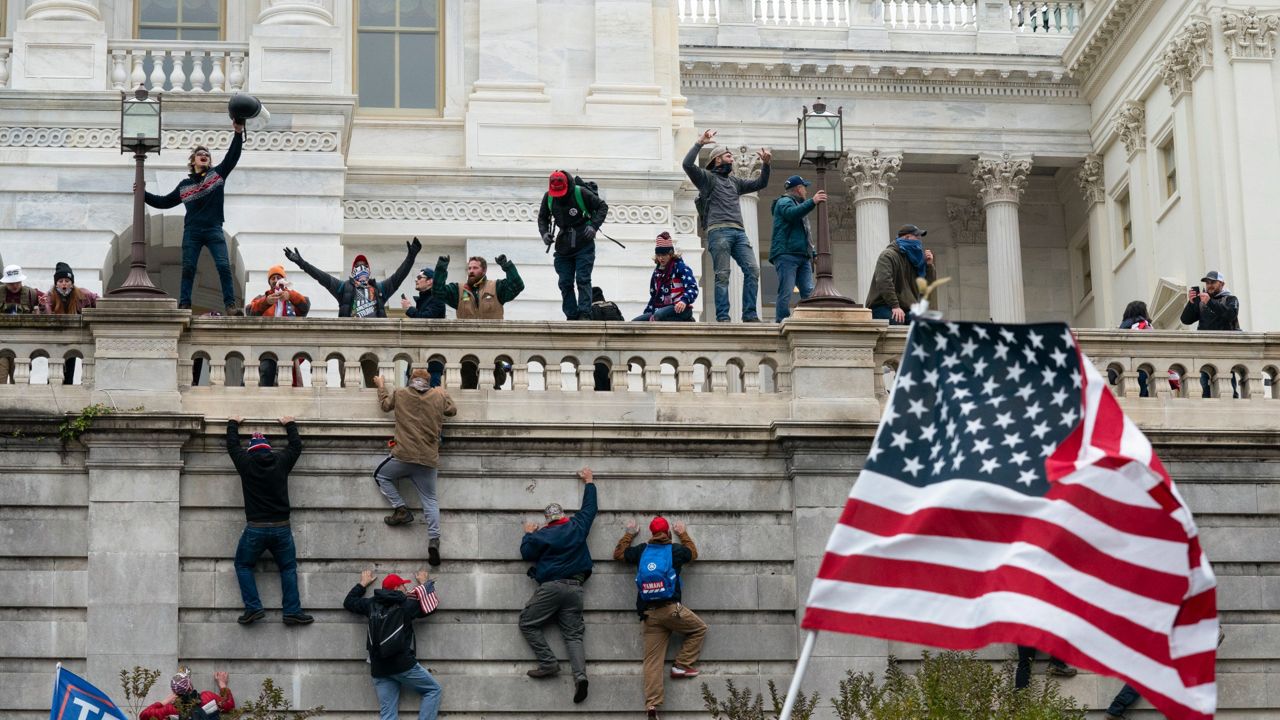 WASHINGTON — After a mob of Donald Trump's supporters breached the U.S. Capitol on Jan. 6, 2021, some reached the doors of the House chamber and Rep. Troy Nehls, R-Richmond, sprung to action. The former sheriff and combat veteran, who was on his third day of the job, helped barricade the doors as rioters pounded the entrance and tried to break in.

“One of the plainclothes officers [came] up to me said, ‘You must leave, sorry, you must leave.’ I refused to leave. I told them that. I'm going to be staying right here with my brothers and sisters in blue. Moments later, then the glass broke,” the freshman lawmaker told Capital Tonight. “It was my job (to) take that law enforcement experience that I had for almost 30 years in that time in the military dealing in combat zones and do everything I could to defuse, deescalate the situation.”

Up in the gallery, lawmakers including Rep. Veronica Escobar, D-El Paso, temporarily took cover before being able to evacuate. She said she was among the last groups to make it out of the chamber that day.

“I’m standing here before you today because Capitol Police saved my life. They saved our lives. They saved our democracy,” Escobar said during House Speaker Nancy Pelosi’s member testimonial event Thursday. “As terrifying as the attack on our Capitol was, what should be even more terrifying to each of us is just how fragile our democracy is.”

Rep. Colin Allred, D-Dallas, texted his wife, “Whatever happens, I love you.” The former NFL linebacker said he was convinced he needed to defend his colleagues.

“It’s important that we talk about the human side of our democracy. Our government isn't made up of just people who, you know, are far away or you ... you never will come into contact with. It’s real people,” Allred said. “I went to Congress that day to ratify the results of an American election with record turnout, and we were attacked. But we came back and we did our job.”

“We have to follow the example of Dr. Martin Luther King, Jr. – that the best results occur from peaceably doing these things,” Gohmert said in a recent interview with Capital Tonight.

“I don't regret those remarks. I do think we should follow example to Dr. King and have peaceful protests. I just regret so many people taking that out of context,” he went on to say.

Most Texas Republicans ended up voting against certifying the electoral votes from Arizona and Pennsylvania for Biden. Because of the attack, which was fueled by Trump's repeated misstatements about the election, the House voted to impeach Trump. Rep. Joaquin Castro, D-San Antonio, served as an impeachment manager for the Senate trial.

“It's a real test for our country and for our Congress, whether we're going to have the will to hold the people accountable who perpetrated that act,” Castro said. “I can only hope that through the Jan. 6 (committee) and the work of the Department of Justice, that we do everything possible to hold the people who terrorized the Capitol that day responsible.”

The anniversary comes as the House select committee investigating the Capitol attack prepares to hold public hearings. Republicans accuse the Democrats of conducting the inquiry for partisan purposes and believe it has only deepened divisions.

Nehls said while he thinks anyone who committed violence in and around the building should be prosecuted, he remembers Jan. 6 for the divisiveness.

“I’ve been there 12 months and there is no bipartisanship up in Washington, D.C.,” Nehls said.

But Democrats said a threat to democracy should upset everyone regardless of party.

“We need people of all political persuasions to say American democracy is much more important than who is in power at a particular time,” Rep. Lloyd Doggett, D-Austin, said.

And Texans who were there said what is most important is that an attack on the Capitol never happens again.