ERCOT fact check: Have our monthly bills only increased $1.26?

AUSTIN, Texas – For months now, Texans have complained about higher electric bills. After the deadly winter storm in 2021, the Texas Legislature and the Public Utility Commission of Texas (PUCT) made many changes to the way the grid operates, including requirements for power plants to weatherize their equipment.

At a recent press conference, PUCT Chairman Peter Lake said in order to meet the requirements of Senate Bill 3, the Commission has “expanded reserves for a greater margin of safety, getting more generators on sooner rather than later.”

“All of those operational changes have cost on average $1 and a quarter per household per month,” Lake said. 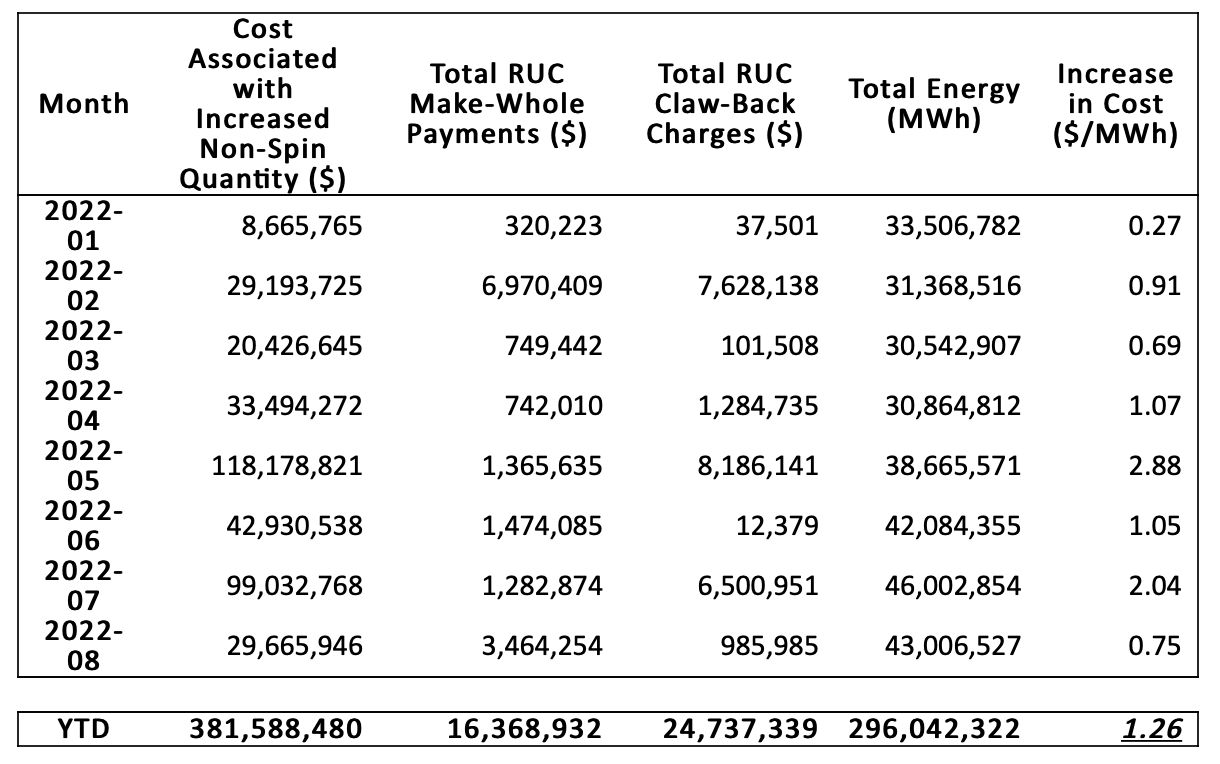 ERCOT provided data to show how it got to the $1.26/month/houshold figure. (Source: ERCOT)

In an email to Spectrum News, the Electric Reliability Council of Texas (ERCOT) explained that 1,000 kWh (1 MWh) "is assumed to be the average use per household in a month." ERCOT's data shows that Texans are being charged an additional $1.26 per month to operate the grid conservatively. That would be less than $20 a year.

Hirs said Lake and ERCOT are misrepresenting how much “reliability” is costing consumers. Hirs estimates it’s more like $15 a month per household.

In an interview with Capital Tonight’s Karina Kling, Doug Lewin, an energy consultant and the president of Stoic Energy, said Hirs is right.

“What ERCOT and the PUC have done is sort of answered a different question than what is being asked, and they’re only giving a partial answer,” Lewin said. “One of the biggest increases in the cost of what they are calling ‘conservative operations' comes because they are taking some of the power plants out of the auction, out of the bid stack. This drives costs up for all the other plants that are in the market. They’re leaving that out of their analysis. They’re just taking one very small slice of the pie and saying, 'This is $1.26,' and leaving all the rest out. So unfortunately, it’s a much higher number, something like the $10 or $15 like Ed Hirs said.”

In addition to the so-called “reliability” charge, Hirs said Texans are shelling out even more cash because of rate hikes and the soaring price of natural gas.

“Right now, it's a little bit around $7 per 1,000 cubic feet. Over the summer, it got as high as $9. That is easily double and almost triple what it was the more than a year ago, and so that's caused the fuel cost in ERCOT to go up tremendously. Now that's something we have to pay just because it's a pass-through,” Hirs said. “But we've also had increases in the local distribution companies’ bills. Oncor is asking for a rate increase. CenterPoint’s asking for rate increase. Austin City is asking for a rate increase. These companies are the ones that manage the local grids that get the electricity from the main transmission lines to our homes."

These extra costs have shown up on Hirs’ electricity bill.

He added that Texans can expect higher bills for the next five to 10 years as consumers pay off the billions of dollars lost during the freeze in 2021.

But it’s not clear if these costs are actually making the grid more reliable. Texans were asked to conserve energy three times this summer.

“If you listen to the generators, they say this practice of removing plants and sort of forcing them to be on no matter what decreases reliability, because it increases the wear-and-tear on those plants and reduces the amount of time they can be in maintenance,” Lewin said. “So I think the Independent Market Monitor said it best, where she was putting how much these costs were — which are quite a lot, in the billions of dollars — and she said it ‘may have an effect on reliability.’ So it’s a lot of money for very little benefit.”

The Independent Market Monitor is Carrie Bivens of Potomac Economics. She declined an interview request. Lake recently said that maintenance is "absolutely being performed" on the plants, but "sometimes it may be delayed or accelerated based on the conditions."

Lewin suggested that prices could go up even more for consumers, depending on what the PUCT decides to do in Phase 2 of their market reforms. The Commission approved Phase 1 last year.

“If they decide to go to something that is known as a capacity market, a load-serving entity obligation, this $10 to $15 is nothing. It’s a drop in the bucket," Lewin said. "We will see our bills go much, much higher. The Legislature will probably want to weigh in on that. I think customers are looking at quite a bit of pain for quite a while. And of course, a lot of that is also about natural gas and what the price of natural gas is and how much our system is dependent upon natural gas.”

Last week, Lake said he was not aware of any new natural gas or coal plants coming online, but he’s hoping to incentivize additional power generation in Phase 2. The information about Phase 2 is expected to be released later this year, likely after the Nov. 8 midterm election.

“Looking at building more transmission to integrate more wind and solar, but wind and solar that’s geographically spread out. That gives us more diversity,” Lewin said. “Looking at trying to get more energy storage onto our grid. We’ve got a great start there. Energy efficiency… We are way behind what other states are doing. That could be another thing to think [about] to both reduce costs and increase reliability.”