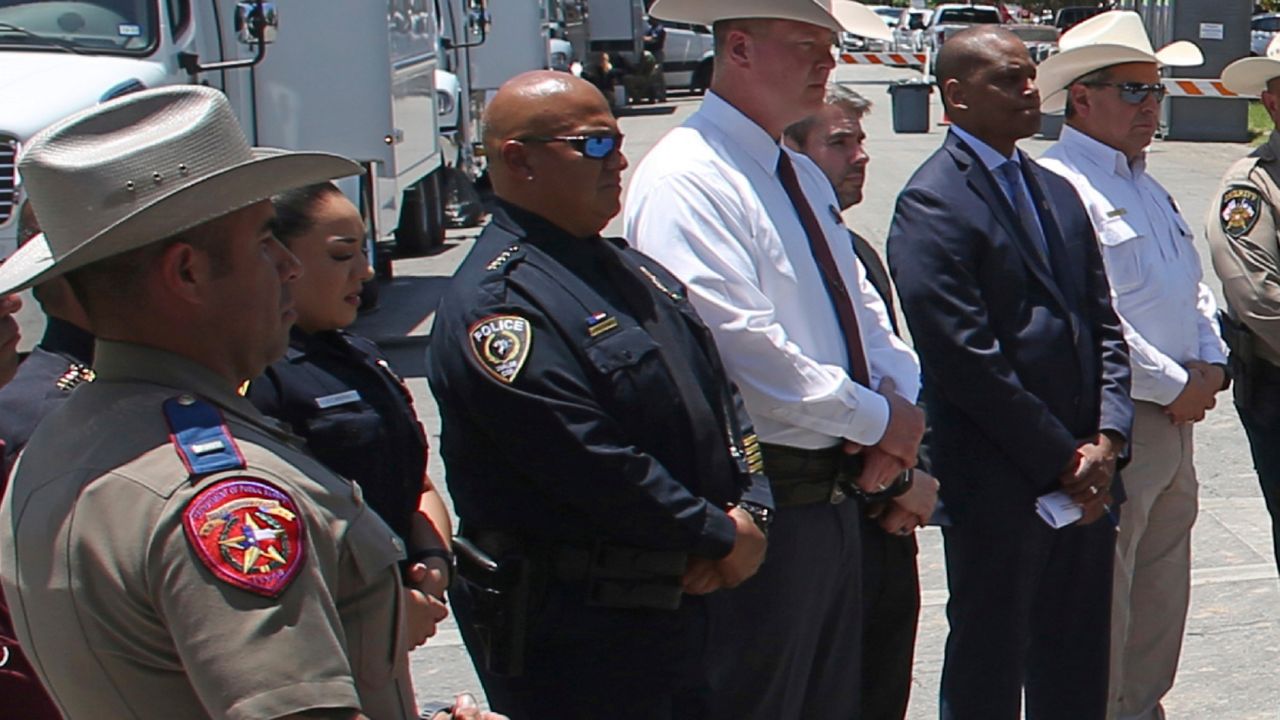 Uvalde School Police Chief Pete Arredondo, third from left, stands during a news conference outside of the Robb Elementary school on May 26, 2022, in Uvalde, Texas. Arredondo is set to face becoming the first officer to lose his job over the slow and bungled law enforcement response to one of the deadliest classroom shootings in U.S. history. The Uvalde Consolidated Independent School District board will make their decision Wednesday, Aug. 24, in a rescheduled meeting from July on Pete Arredondo’s future. (AP Photo/Dario Lopez-Mills, File)

UVALDE, Texas — Police Chief Pete Arredondo has been fired in the wake of the Robb Elementary mass shooting.

Arredondo was scheduled for a hearing on Wednesday night. He informed the Uvalde CISD board he would not be attending less than an hour before the hearing began.

Instead, minutes before the meeting of the Uvalde school board got underway, Arredondo’s attorney released a scathing 4,500-word letter that amounted to the police chief’s fullest defense to date of his actions. Over 17 defiant pages, Arredondo is not the fumbling school police chief who a damning state investigation blamed for not taking command and wasted time by looking for keys to a likely unlocked door, but a brave officer whose level-headed decisions saved the lives of other students.

It alleges that Arrendondo warned the district about a variety of security issues in the schools a year before the shooting and asserted he wasn’t in charge of the scene. The letter also accused Uvalde school officials of putting his safety at risk by not letting him carry a weapon to the school board meeting, citing “legitimate risks of harm to the public and to Chief Arredondo.”

“Chief Arredondo is a leader and a courageous officer who with all of the other law enforcement officers who responded to the scene, should be celebrated for the lives saved, instead of vilified for those they couldn’t reach in time,” Hyde wrote.

Arredondo is the first officer dismissed over the hesitant and fumbling law enforcement response to the May 24 tragedy. Only one other officer — Uvalde Police Department Lt. Mariano Pargas, who was the city’s acting police chief on the day of massacre — is known to have been placed on leave for their actions during the shooting.

School officials have said the campus at Robb Elementary will no longer be used. Instead, campuses elsewhere in Uvalde will serve as temporary classrooms for elementary school students, not all of whom are willing to return to school in-person following the shooting.

School officials say a virtual academy will be offered for students. The district has not said how many students will attend virtually, but a new state law passed last year in Texas following the pandemic limits the number of eligible students receiving remote instruction to “10% of all enrolled students within a given school system.”

However, according to the district’s own progress reports, as of Tuesday no fencing had been erected at six of the eight campuses where it was planned, and cameras had only been installed at the high school. Some progress had been made on locks at three of eight campuses, and communication improvement was marked as half complete for each campus.

On his LinkedIn page, Arredondo lists his experience as 18 years in law enforcement, including experience as an assistance chief in Webb County. Before the hearing, Arredondo released a 17-page statement and requested the district consider it and read it into the record.

This is a developing news story. We will have more information as it becomes available.

— The Associated Press contributed to this story.