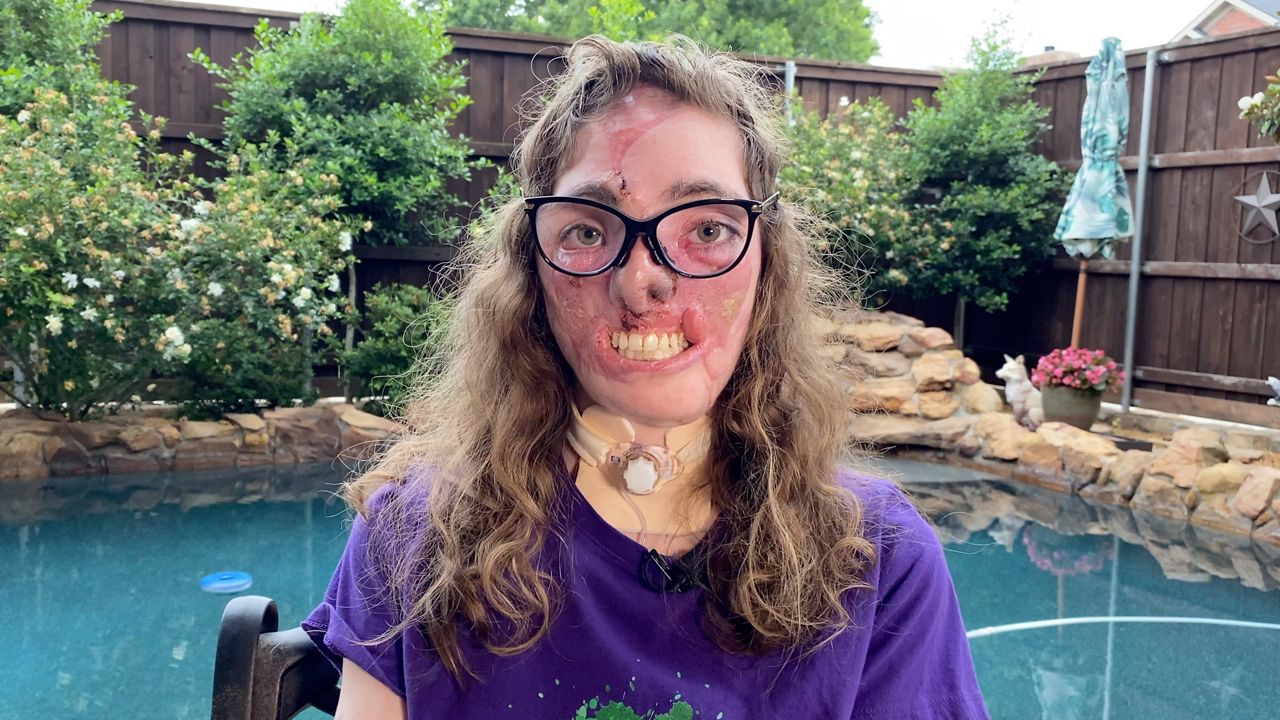 Twenty-two-year-old Jacqueline Durand has dreams of being an Inspirational Speaker after a dog attack last year. (Spectrum News 1/Lupe Zapata)

‘What doesn’t kill you makes you stronger': How Jacqueline Durand aims to inspire

COPPELL, Texas — If you type the name Jacqueline Durand into a Google search, you’ll find multiple news articles like, “Texas college student loses her ears, nose and lips after being attacked by dogs.”

But those articles don’t tell you about who she is on the inside.

The 22-year-old woman is making the choice to focus on the good in her life, even though staying positive over the last seven months has been hard.

Since the attack on Dec. 23, 2021, Durand has endured 17 face surgeries, many of which were reconstructive. You might think her love for dogs has wavered since the traumatic event, but it hasn’t. In fact, her two fur babies, Aspen and Abby, have helped bring her comfort through her healing process.

“I’ve grown up loving dogs.” said Durand. “My dad had a golden retriever when I was an infant. I would sit myself up and stare at her. I feel like that was somehow the foundation for my love for dogs without me even realizing it.” 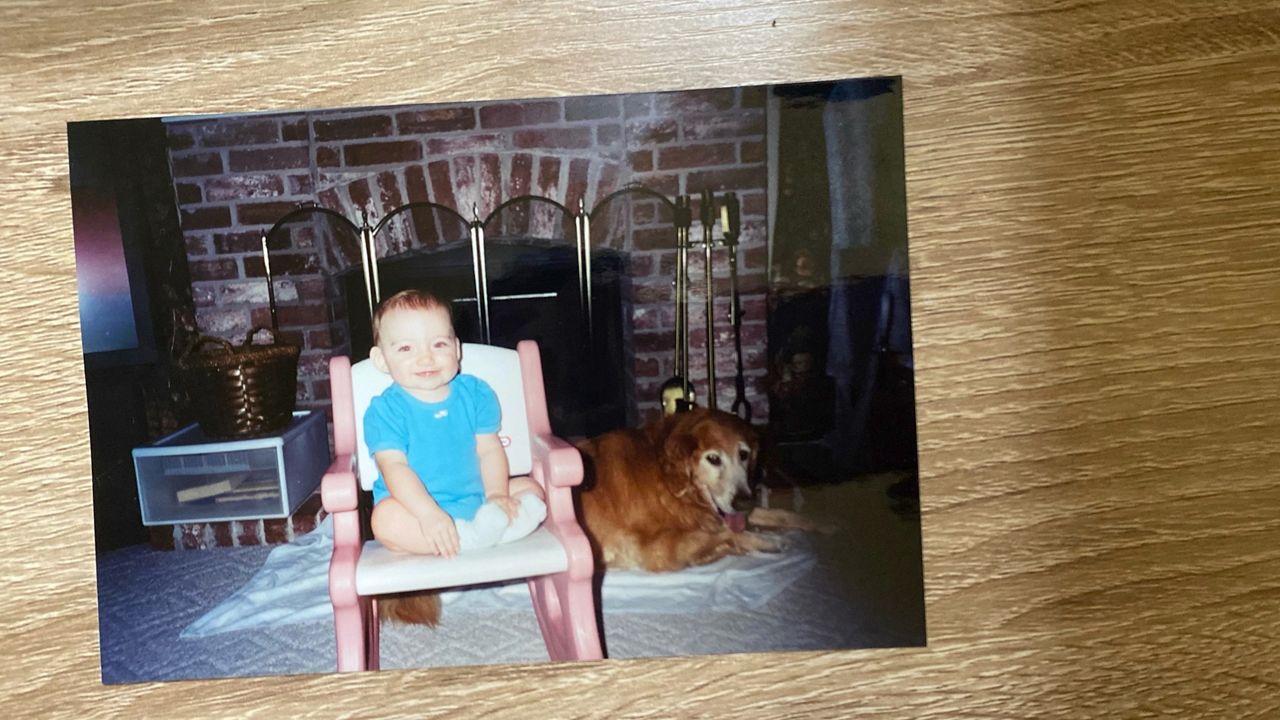 Pictured is a 1-year-old Jacqueline Durand with her father’s golden retriever. She feels their bond sparked her lifelong love for dogs. (Spectrum News 1/Lupe Zapata)

Durand started her own dog-sitting business while attending college and enjoyed the opportunity spending time with other people’s pets.

“It never really felt like work,” she said. “I really do love what I do.”

The night she was attacked, she was sitting for a Coppell family’s three dogs while they were out of town.

“I try not to focus on what happened,” said Durand. “I don’t want to be known as the girl that got attacked by dogs.”

She wants to be known as the girl who’s living her best life, with the hope her positive outlook on her misfortune will inspire others to tackle their hardships.

“At the end of the day, I really do feel very blessed for what I have,” said Durand. 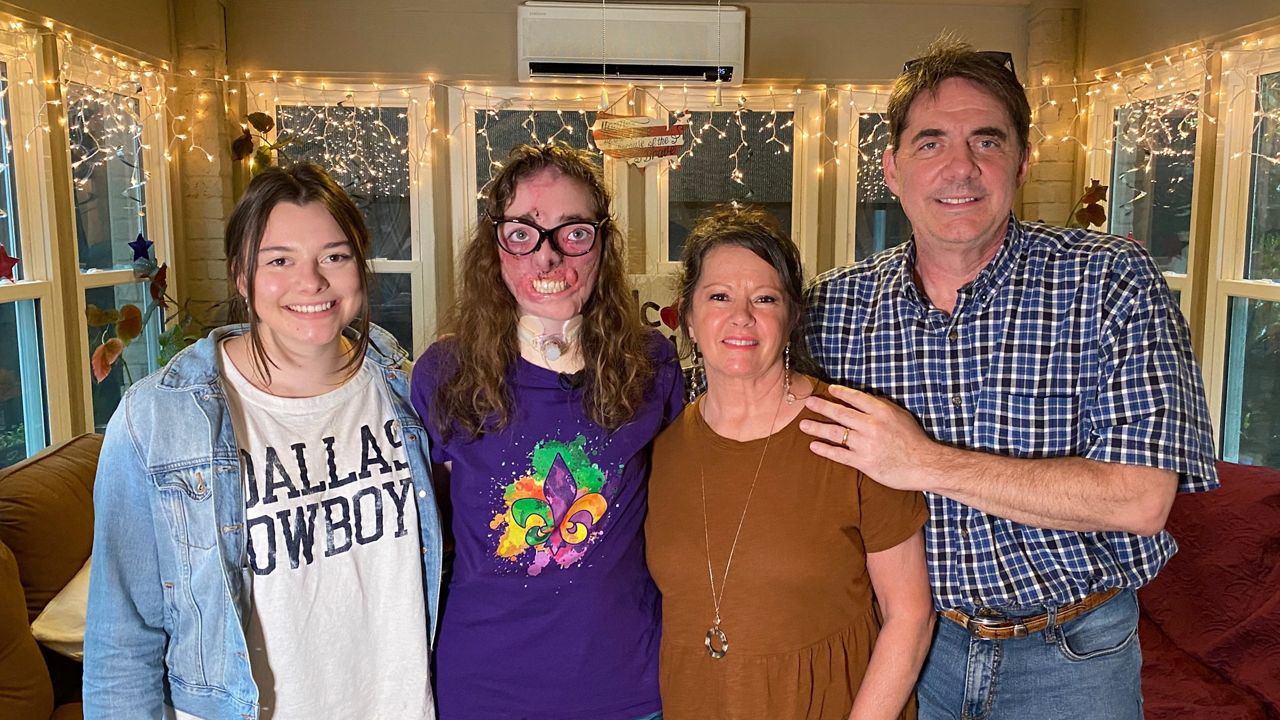 Jacqueline Durand smiles for a picture with her sister Barreca and parents Shirley and John Durand. (Spectrum News 1/Lupe Zapata)

She has a supportive family, a loving boyfriend of three years, and says it could have been worse.

“I could have died,” said Durand. “Like one of my favorite artist Kelly Clarkson says, ‘What doesn’t kill you makes you stronger.’”

She is documenting her journey of strength across social media with short funny TikTok videos and longer form testimonials on her new YouTube channel.

When Durand uploaded her first TikTok video in March of 2020, she never imagined any of her videos would get banned by moderators for "sensitive content." When she first tried uploading her first TikTok since the attack, the app put a warning on the video that reads, “Some people may find this video to be disturbing.”

“The fact a video simply showing my face would trigger such a response is hard,” said Durand. 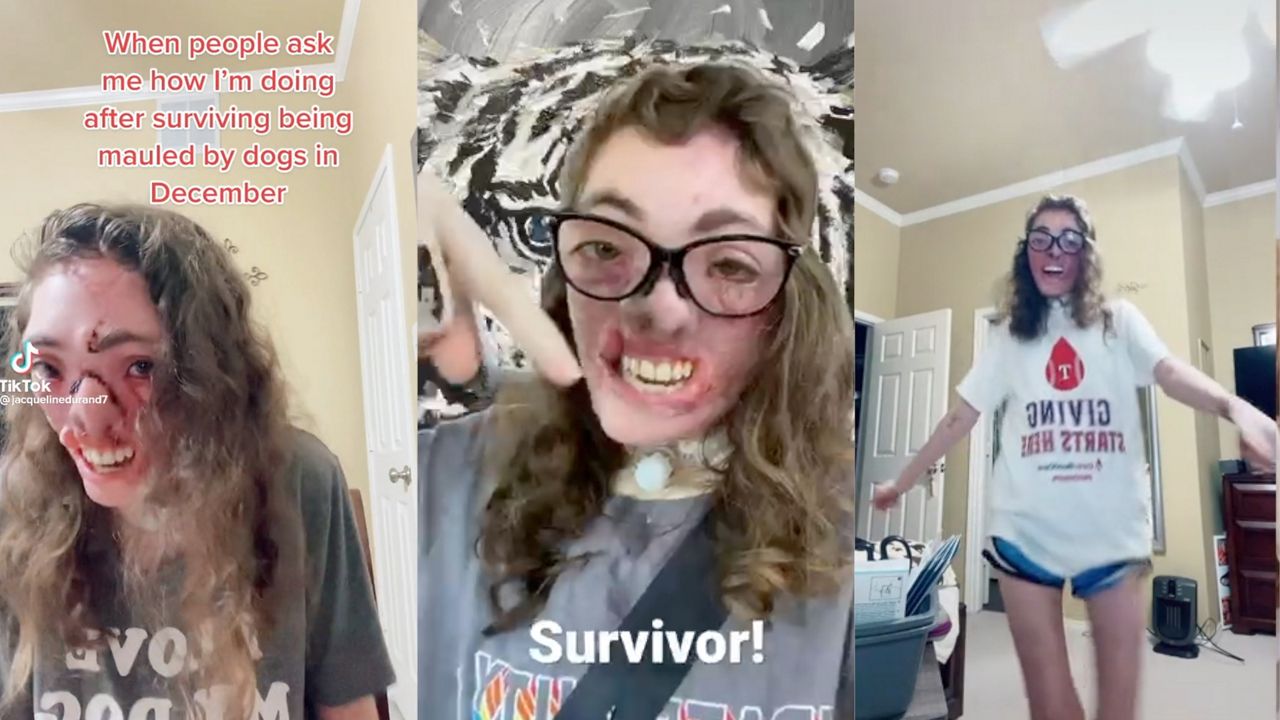 However, the newfound support in the form of hundreds of new followers has made accepting her situation a little bit easier.

In May she posted a TikTok video titled, ‘Dog mauling survivor.’ In the video she lets her friends and family know that she is doing OK and about the importance of dog owners knowing if their pets pose a risk of attack.

One of her followers commented on the video, posting, “You are a warrior, a survivor. It’s okay not to be okay sometimes and you’re still strong no matter what.”

“I want people to know that they’re not alone,” said Durand. “Especially after dealing with traumas or just bad times in their lives.” 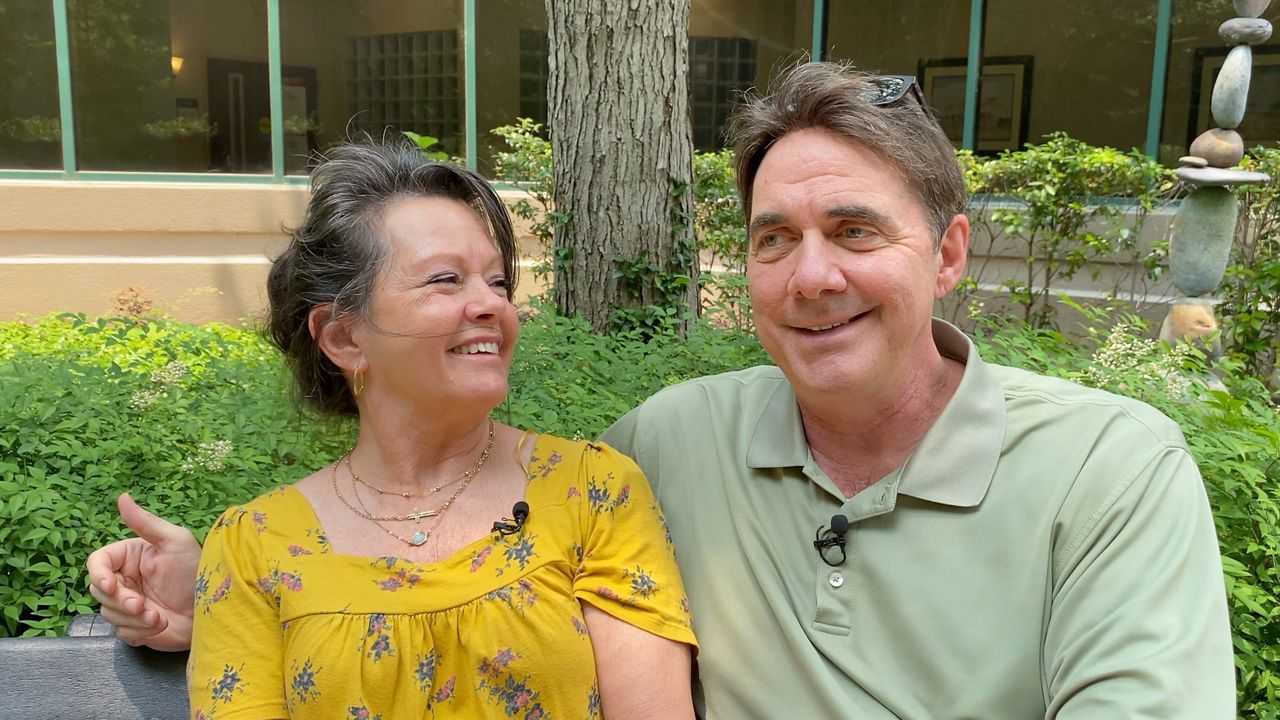 Spectrum News 1 sat down with Jaqueline’s parents Shirley and John Durand on the day of her 16th face surgery. The procedure on her nose wasn’t as serious as the ones before it, but the couple still gets anxious during every surgery. They say their daughter’s attitude toward life has made the recovery easier for them.

“She’s so positive,” said Shirley Durand. “I really thought we were going to need to be strong for her, and she’s turned it all positive for us.”

“We already believed we were a close and strong family, but this is just taking it to a different level,” added John Durand.

A week after her 16th surgery Spectrum News 1 met with Jacqueline as she edited her first YouTube video. She hopes the channel will spark a future as an inspirational speaker. On the channel she’s posting videos giving updates after surgeries, the story of how she and her boyfriend fell in love, and news stories that have covered her attack.

“I’m trying to inform people about the struggles and miracles that have come with this journey that I am facing,” said Jaqueline Durand.

In her room, there’s a quote that reads, “Let your faith be bigger than your fears.” She says it reminds her to stay strong, especially on the hard days.

“I feel like it’s part of my purpose to get through this and help others,” said Jaqueline Durand. “Because yeah, I’m going through this, but I’m not the only person in the world who’s going through a hard time, and I want to share hope and kindness, and love.”

Her goal is to finish her bachelor’s degree in supply chain logistics from the University of Texas at Dallas. However, her dream is to be an inspirational/motivational speaker, traveling the world and sharing her story of survival. 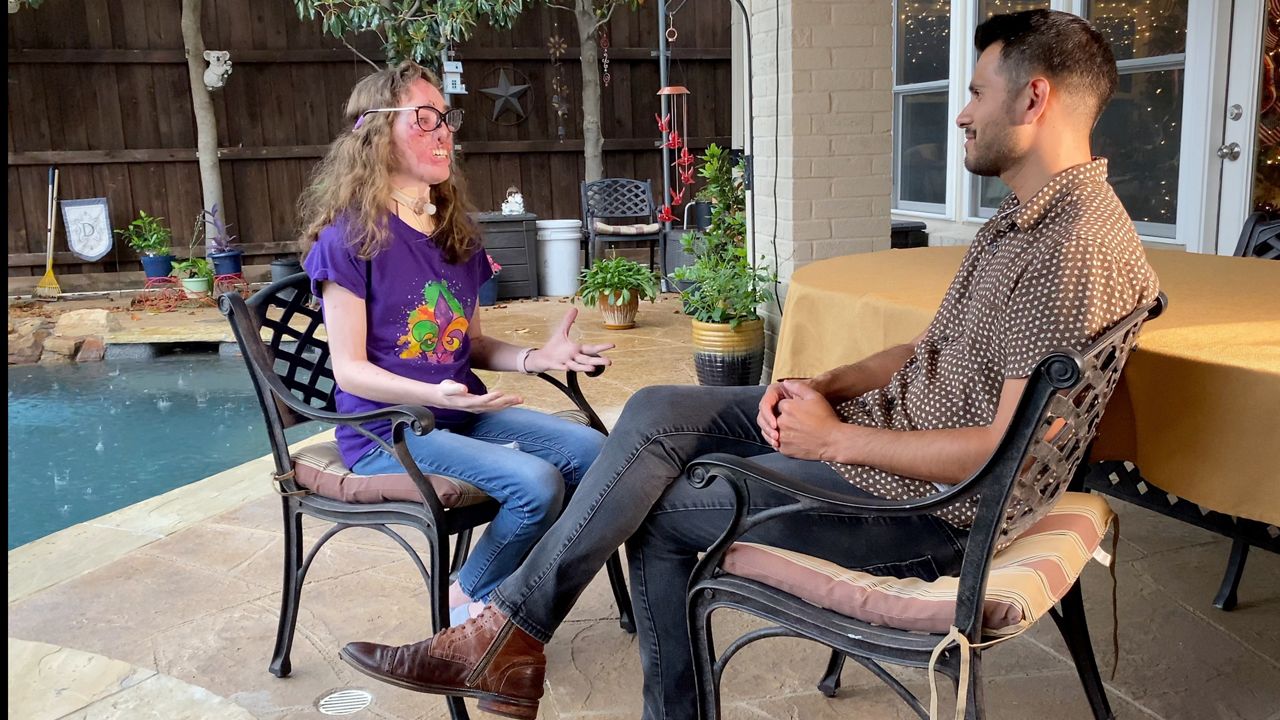 Spectrum News 1 Human-Interest Reporter Lupe Zapata sits down with Jacqueline Durand at her home in Coppell for a conversation about her future. (Spectrum News 1/Lupe Zapata)

When asked what her dreams for the next five years would be, she said, “The idea of being a professional speaker getting paid to share my story and hopefully inspire others through this really horrible thing that happened to me is really exciting.”

When asked if she could pick one TV talk show to be a guest on and share her story, which one would it be? She responded without hesitation.

“The Kelly Clarkson Show, of course,” she said.

If you have an interesting story, or an issue you’d like to see covered, let us me about it.

As Spectrum’s Texas Human-Interest Reporter I aim to cover stories about interesting people like Jacqueline, email me at Lupe.Zapata@Charter.com  ​