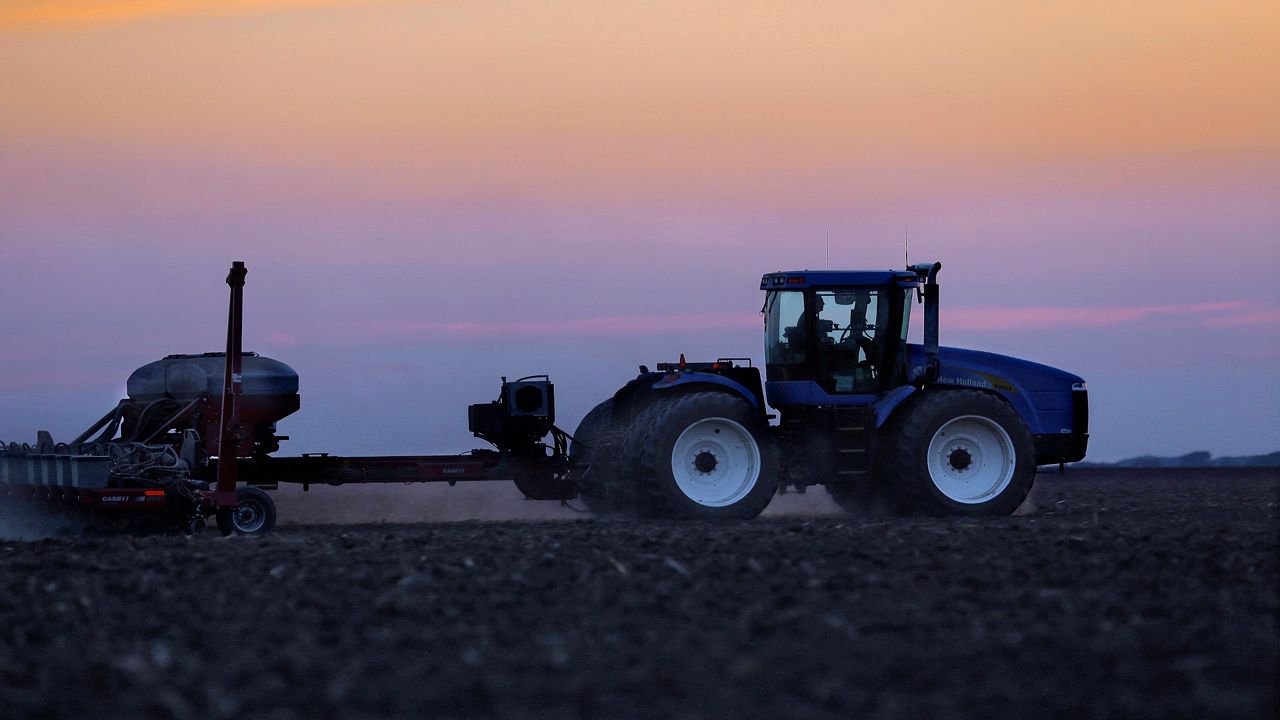 FLORESVILLE, Texas — Texas is experiencing record-breaking heat. And along with it–drought. Right now, 85% of Texas is under extreme drought conditions.

“It seems to be hotter earlier,” said Russell Boening, a farmer and rancher in Floresville, a city southeast of San Antonio. “We started getting over 100 [degree days] back in June. And here we are on August first. Our area right here has been extremely dry, and most of Texas is extremely dry. The last time it was this dry was 2011, at least in this area. And it just seems to be lasting longer and seems to be a little bit hotter than it was in 2011.”

Boening’s uncle and father started farming and ranching on this land in the mid-1950s. His grandfather also farmed in the area. Today, Boening tries to grow 4,500 acres of crops each year. In one field, he grew grain sorghum. The yield this summer was smaller than normal.

“Your yields are down, your check’s going to be down,” Boening said, noting that it’s too early to know how much money he lost. It’s only rained 2.5 inches on Boening’s land since Nov. 1, 2021.

On the left, ⁦@RBoening⁩’s grain sorghum on June 15, 2021. On the right, his crop on the same day this year. Tonight at 7 on ⁦@TXCapTonight⁩, how the extreme heat/drought has impacted farmers & ranchers in Texas. ⁦@SpectrumNews1TX⁩ ⁦@TexasFarmBureau⁩ pic.twitter.com/qhlyKHYl9y

“A lot of your inputs were already in that crop: your fertilizer cost, your fuel cost, your labor cost. So it’s going to be an economic hit,” Boening said.

In 2023, there will be discussions about a farm bill. The last one was written in 2018. Boening said it’s important that crop insurance is included in the next iteration.

“If a farmer or rancher had to buy that crop insurance, without the federal subsidy, it would be cost prohibitive,” he said. “Why is that important? It’s important because of food security. In the long run, do we want to keep our farmers and ranchers? It’s about keeping the industry strong.”

Boening said he’ll get some insurance money this year because he didn’t have a crop yield.

“[Insurance] could be the thing that makes that farmer, rancher able to farm and ranch next year,” he said.

In addition to growing crops, Boening also raises cattle. As the president of the Texas Farm Bureau, he’s talked to other ranchers who have it worse than he does. Some of them are selling off their cattle. They don’t have enough water, food, or resources to take care of them. Boening hasn’t had to do that yet.

“When you don’t have anything for them to graze, you either have to feed them or sell them,” he said. “[If you sell them], you’re getting some return for selling them. But you’re also selling your seed stock. You’re selling your cows that were going to produce a calf next year, and the year after. Economically, it’s a tough deal. You push through because it’s what you do.”

Cattle prices might be lower than usual because there’s too much supply and not enough demand.

“The price has dropped some because of the numbers hitting,” Boening said. “Actually, before the drought really hit with a vengeance, cattle prices were kind of moving up. And you know, if it would have been a normal year–we just we don’t know what normal is in Texas sometimes–I think prices would be higher.”

Boening explained that if you can’t grow cow feed (hay) due to drought conditions, you have to buy it. Irrigation helps with growth, he said, but that’s also expensive with rising fuel costs.

“If you’ve had other issues and things that have economically set you back, even before the droughts, well, the droughts could be the straw that breaks the camel’s back, so-to-speak,” he said.

The state climatologist said Texas is not experiencing more rapid temperature changes than other states, and there hasn’t been a decrease in precipitation overall. However, Texas has more inconsistent rainfall year-over-year, compared to other states.

“As temperatures go up, evaporation rates increase, and rainfall becomes more erratic, we’re starting with a greater vulnerability to drought in the first place. So anything that makes droughts worse, makes them particularly bad in Texas,” said John Neilson-Gammon, the Texas State Climatologist and Regents Professor of Atmospheric Sciences at Texas A&M University.

Texas is no stranger to hot weather and droughts, but this year is different.

“For much of the state–basically everywhere from San Angelo to Galveston, including San Antonio–we’ve had several months that have been the hottest on record,” he said. “So in that sense, this type of weather, specifically this, this extreme, has never happened before.”

Texas is vulnerable to climate change for several reasons.

“First, we’re a coastal state, which means that we’re vulnerable to changes in sea level and changes in hurricane intensity. So that’s a potential problem. That’s going to continue to get worse over time,” Neilson-Gammon said. “Secondly, rainfall intensity is increasing everywhere. But in Texas, we start off with more intense rainfall than in any other state… Third, being a fairly warm state, that means that as disease vectors such as mosquitoes, particular diseases that are tropical, can spread to higher latitudes as the environment supports them. Texas will be sort of on the front lines for that, compared to the rest of the United States.”

Looking ahead to the future, Neilson-Gammon said Texas could become a leader in sustainable energy. Currently, Texas is a hub for the oil and gas industry, which contributes to climate change.

“Temperatures in Texas have gone up by more than half a degree Fahrenheit per decade for the past several decades, and that's on track to continue, at least for the next few decades,” he said. “Beyond that, it'll depend upon what we're doing globally about climate change… But the higher temperatures [and] the more erratic rainfall will combine to decrease the amount of moisture in the soil on average. And that means there'll be less water available for growth of grasses and forage and so forth. So basically, the entire Texas natural environment is going to be drying out as a result of climate change.”

It already feels like Texas is drying out. It’s been a tough year for farmers and ranchers in the state, but Boening said they always try to push through.

“Everybody just pulls together and looks forward to better times ahead,” he said.