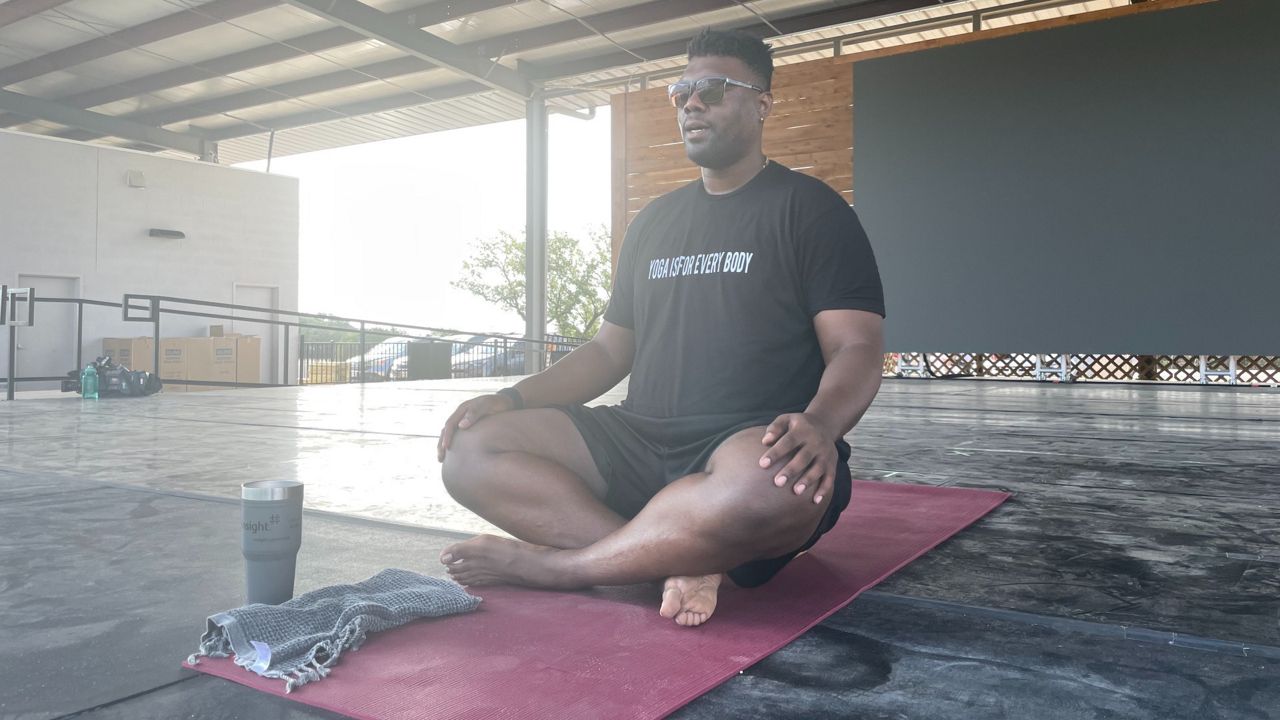 De’Aires Cotton shifts his focus on being a yogi. (Spectrum News 1)

Namaste a while at former Longhorn’s yoga class

AUSTIN, Texas — De’Aires Cotton is using the focus that made him a coveted football prospect to find fulfillment as a yogi.

The Houston-area local took to football early on, eventually gaining attention as a defensive lineman at Alief Taylor High School. ESPN ranked Cotton in the top 25 at that position in the country, and drawing the attention of National Champion Mack Brown at the University of Texas.

“The love of the game of football is just sort of a family thing,” Cotton said. “I started playing for my church, and as I grew, I grew to love it more and more.”

Cotton was determined to get on the field ahead of his junior season, but an injury erased any hopes of making it to the National Football League.

“Definitely going to the league. That was something that was an expectation for me,” Cotton said. “[I was] going through practice, but I had a career ending back injury. Basically, if I continued to play, I wouldn’t be able to move or be mobile. So, that’s when I took my energy of loving the game into something I was passionate about.”

That passion lead him to an unlikely place, a yoga studio.  The idea was unnerving for Cotton and he sought the advice of others before finally going to his first class.

“It wasn’t something I thought I would do. It was something that was completely off the wall,” Cotton said. “I was nervous, kind of embarrassed, because I knew I was going to be a big guy in there. I knew was going to cause attention.”

“I contemplated with a friend, and they were like ‘Hey Cotton, you’re always a big guy, you’re always going to bring attention always, so you should just go.’ So, I went, and I loved it.”

Eight years later, Cotton is a fully certified yogi, teaching classes in large groups monthly. His nervousness at being too big to take part inspired a ‘Yoga Is For Everybody’ philosophy. That anyone, no matter their size, age, gender or race, can take part.

“I’ve been teaching for three years,” Cotton said. “I hear a lot of my students say ‘I love you give us the space to be who I am.’ This is a safe place when you come to a ‘Yoga Is For Everybody’ event. We want to invite you. We want to welcome you.”

“Yoga Is For Everybody” events are the first Sunday of the month at The Crossover in Leander from 10 to 11 a.m.