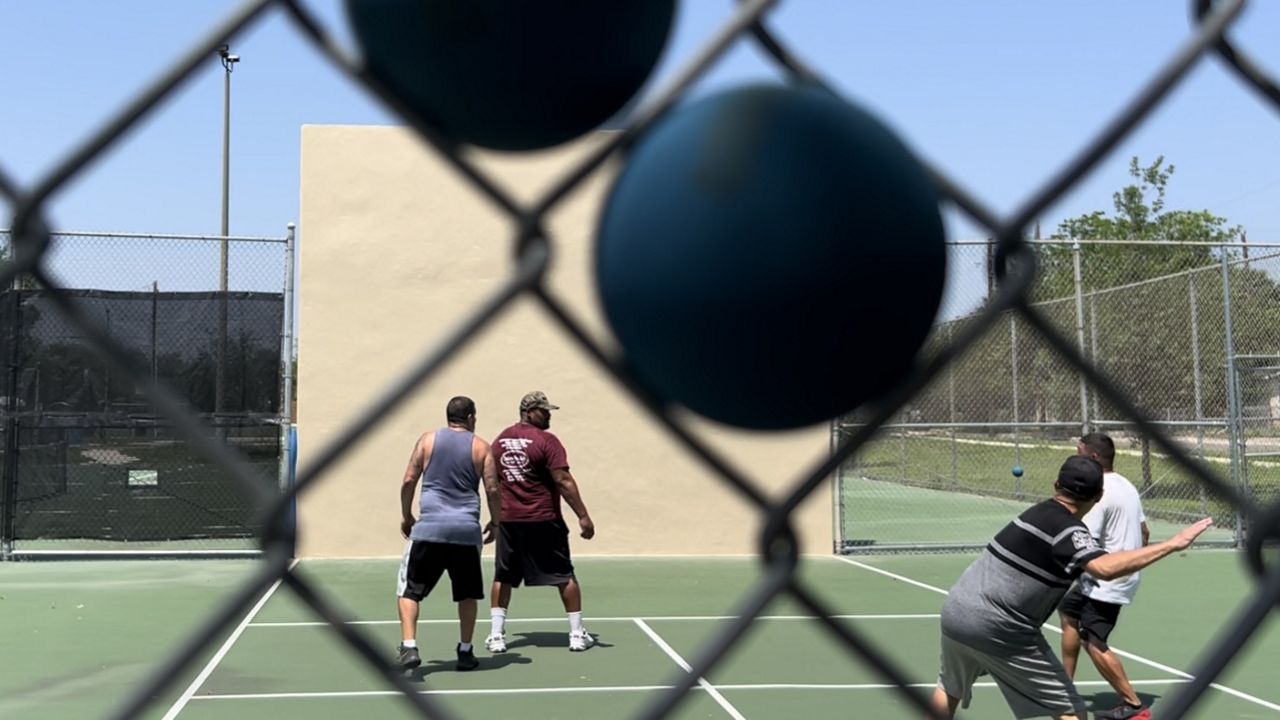 A weekend game of handball at Escobar Park on San Antonio's West Side. (Spectrum News 1)

SAN ANTONIO — The word bola (ball) can be heard every weekend on San Antonio’s West Side. In this barrio, bola — Chicano slang for "handball" — is played at Escobar Park.

The ball is blue and 2 and a quarter inches in diameter and whistles in ears when smacked against the wall  — thwonk, thwonk, thwack, thwonk.

Roger Regalado has been playing handball at Escobar Park for over 20 years.

“At the age of 60, I’m still out here getting that cardio and staying healthy. If I can do it, anybody can,” Regalado said.

This prison style of handball has definitely kept Regalado in shape, and more importantly, out of trouble.

“I’m an ex-heroin addict, man. I had four prison sentences and when I started coming [here] consistently, all that stopped,” Regalado said. “And all I do today is play handball.”

Regalado says 80% of the handball players were once incarcerated, and inside the caged fence that surrounds the handball court, these men are free.

But it can get difficult to play here, especially when the weather hits triple digits.

The temperature is so scorching that they place their drenched shirts on the bleachers to dry.

The players arrive as early as 9 a.m. to beat the sun, but they play through it and also host statewide tournaments where players from Dallas, Austin, Corpus Christi, New York and Houston come down to Escobar Park to play a friendly game of bola.

“Line ball is a good ball,” Regalado says to the players.

“We got some trees around the park, which give us air and oxygen that we need to breathe, but that sun, that sun is brutal,” Estrada says. “It’d be great if we had like a tarp or a roof. We’ve actually talked to the city people about it.”

Corona, who has played here since 1998, has led those conversations with San Antonio Parks and Recreation.

A project like this can cost up $200,000, but he’s pretty optimistic about getting a roof after a recent bond election.

“They (the city parks) are helping us out in any way that they can and hopefully with this new Parks and Rec bond that just passed yesterday — hopefully we can get a roof pretty soon,” Corona says.

A little over $2 million will be spread amongst five parks in this barrio, including Escobar Park, which has been taken care of for over 40 years by people like Regalado, Estrada and Corona, who were given a second chance.

“I’m staying as healthy as I can and enjoy what I got left of my life and I’m a productive citizen today. No more no no’s,” Regalado says.