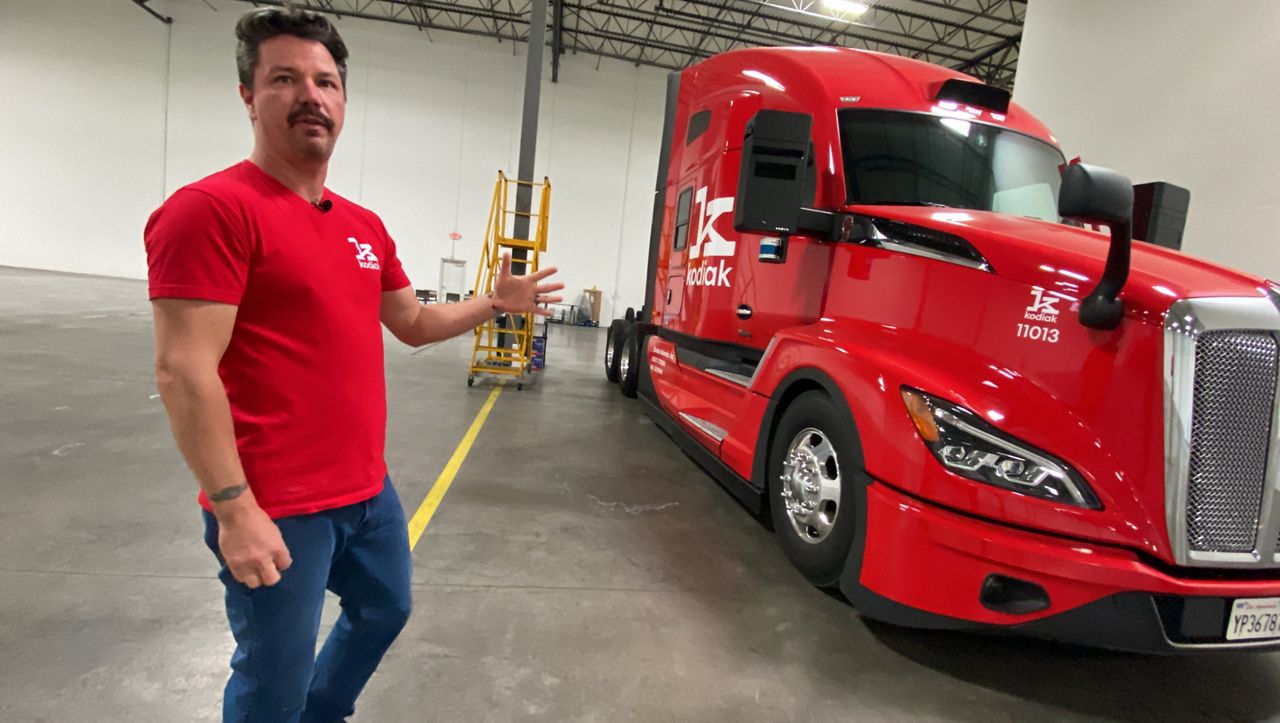 Kodiak Robotics Director of Operations Don Lepard shows off one of the company's self-driving trucks currently being used on routes between North Texas and Atlanta. (Spectrum News 1/Brian Scott)

Self-driving tractor trailers will soon be on Texas roads

LANCASTER, Texas — Drivers probably won’t realize it, but many are currently sharing the road in North Texas with semi trucks that are driving themselves.

California-based Kodiak Robotics announced a new partnership with major freight hauler U.S. Xpress to use their autonomous trucks on routes between Dallas and Atlanta. In a news release, the company said the partnership marks the launch of the first commercial autonomous trucking lane to the East Coast.

At their Texas headquarters in Lancaster, Kodiak Director of Operations Don Lepard oversees creating those trucks. Standard semi bodies are re-outfitted with sensors, computers, and other technology to get them ready for the road. Lepard says he’s worked through several other phases of self-driving technology, starting with Uber’s autonomous ventures.

“Then I went over to a company called Drive AI doing robo-shuttles,” said Lepard. “This is our latest generation, is what you’re seeing right here. It’s a culmination of almost 4 years of work.”

The trucks look like any other tractor trailers you’ll see driving down the freeway and even still have a driver behind the wheel, for now. Lepard said Kodiak plans to continue to have a driver in the cabs of their trucks until they’ve perfected the technology and can prove to the public and lawmakers that it’s as safe or safer than a human driver. He said currently, if even a single sensor stops working during a route, the system gives over control to that human driver.

The sensors are most visible on the large side-view mirrors of the truck, but Lepard said they are scattered throughout so the vehicle can constantly monitor everything happening around it. Just like a human has multiple senses to monitor the world around them, he said the trucks use 3 different sensor types to take in information in different ways.

The truck is tracking the world around it via sound waves, light, and visual detection. Lepard said all of that data is constantly being fed into the truck’s on-board computers at a rate of 10 times per second per sensor.

Lepard said the truck not only detects objects around it on the road, but what each of those objects is, what each one is doing, and how to react appropriately for each individual object’s actions.

“Is it accelerating or decelerating?” Lepard said, as an example. “Where’s it been? Where’s it going?”

All of that, Lepard said, allows the trucks to react far faster than a human driver and potentially drive far safer.

Lepard said safety is certainly their top concern as the technology develops, and knows a self-driving semi is a scary concept to many drivers.

Richard Bishop, who is an automated vehicle consultant specializing in autonomous trucking, said he’s seen the technology slowly develop over the past 20 years. He says safety is always at the subject of conversation. He points out that an accident by a self-driving truck would be a major problem for all the stakeholders involved.

Autonomous vehicles outside of tractor trailers have been involved in some high-profile accidents in recent years. Experts say it’s understandable that adding autonomous tractor trailers to the mix would make many people skeptical.

However, Bishop seemed impressed with what he’s seen in the industry in recent years regarding safety checks and attempts to go even further with making sure the rigs are safe to share the road with.

He said it’s almost time for the tech to hit the road, however anyone may feel about it. Because of the truck driver shortage in the nation, the self-driving technology is looking more attractive to companies needing to move supplies. Bishop said autonomous tractor trailers are inevitable.

“There will still be human driven trucks for a variety of environments, but when it comes to the interstate highways where things are more orderly, it just makes sense,” said Bishop.

As Kodiak’s tech, and the tech of other driverless tractor trailer companies, hits the road, Lepard believes it could answer some of the nation’s trucking problems beyond the driver shortage.

Currently, one of the biggest problems facing the trucking industry is retention of drivers, many of whom are finding dissatisfaction with long, multi-day routes, exhaustive hours, and lack of a home life, according to multiple reports. Lepard believes the self-driving tech offers an opportunity to fill those long routes, which he says truckers have told him most don’t want. Replacing those routes with autonomous vehicles would allow human drivers more opportunity to fill local routes on the front and back end of the hauls. It’s how Kodiak’s routes are operating.

“If we can help automate that over the road, those longer length of hauls, then it gives human drivers the jobs that they want,” said Lepard. “I know once this technology is introduced, I can start making lives better for truckers.”

Lepard said ultimately, Kodiak plans to become a provider of autonomous technology and add their self-driving creations into the trucks of more established freight companies in the business. For now, he said, self-driving trucks will continue down the road with a human in a cab, monitoring everything, until the company can assure everyone the trucks are ready and safe to go it alone.