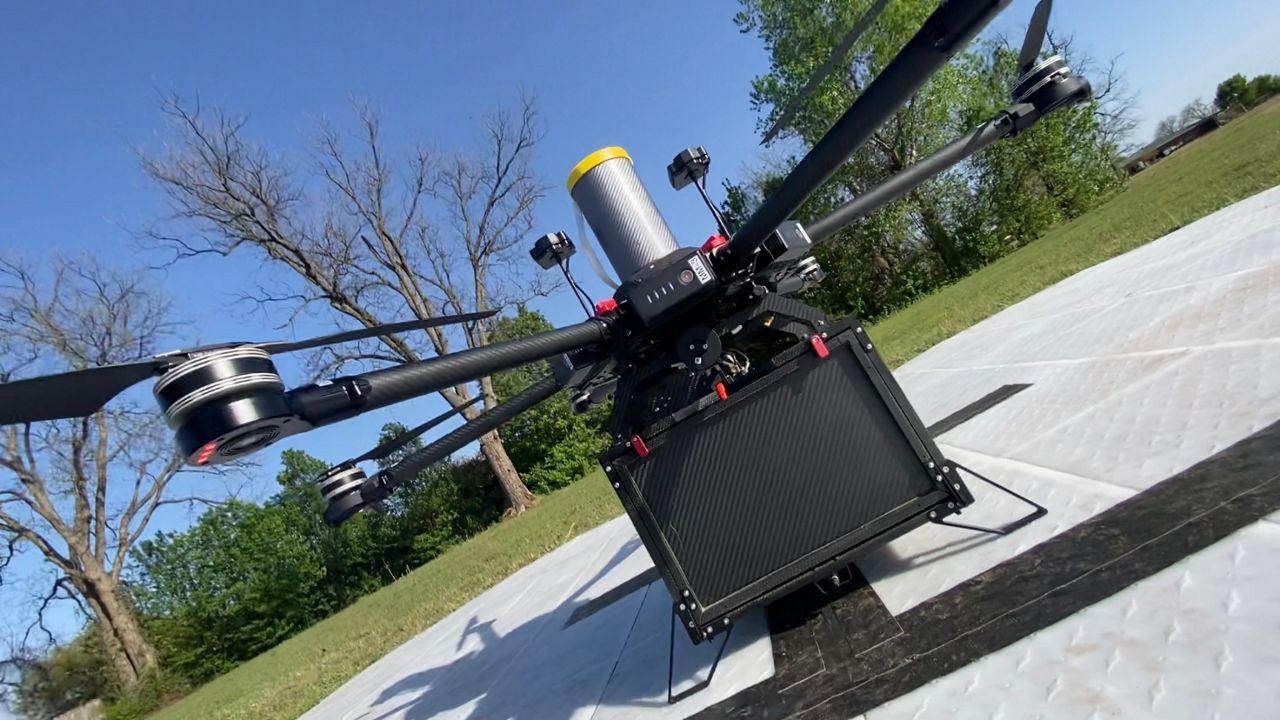 A Flytrex drone is prepped in Granbury to deliver a food order from a local restaurant to a waiting customer. (Spectrum News 1/Brian Scott)

GRANBURY, Texas — About 45 minutes southwest of Fort Worth, Gina McGilberry waited outside her Granbury home, looking toward the sky above some distant trees. A buzzing drone appeared over the treetops and approached their home.

As the black drone came to a hover overhead, a door opened and a bright yellow bag slowly came down on a hook and rope until it came to a rest in the McGilberrys’ yard. The drone quickly flew away as McGilberry picked up the bag and found her order of Raising Cane's chicken fingers and an iced tea inside.

“Ta-da!” Said McGilberry with a laugh. “It is totally awesome.”

It is the drone food delivery service Flytrex which just launched in Granbury last month, and the McGilberrys are already regular customers. Users can order from several restaurants through the Flytrex app and have their food delivered by drone into their front yard.

The Granbury location is Flytrex’s first U.S. location outside of the 3 they run in North Carolina.

Jason McGarry, Flytrex's regional manager in North Texas, said the company partners with local restaurants and local, licensed drone pilots to make the service work and use the company’s custom drones for delivery. McGarry said the drones are always under the watch of a pilot and always follow FAA regulations.

Flytrex isn’t the only one trying to bring drone delivery options into the Lone Star State. Just this month, drone service Wing announced they’re ready to deliver pharmacy items, first aid kits and ice cream treats in Frisco and Little Elm — the company’s first launch in a major metro area. Other companies offering deliveries from packages to other items are also taking their drone services to suburbs and smaller communities first.

McGarry said Flytrex hopes to expand to other communities in the DFW area in time, but Granbury made sense as a first offering. There’s a lot of obstacles in place for drones to deliver, like air space restrictions, federal licensing and keeping within tight service areas. Flytrex is currently only able to deliver about one nautical mile from their headquarters along Highway 377.

However, McGarry said the company is just starting out, and he said the field of drone delivery has already grown dramatically from its earliest days.

“In order to make history, you’ve got to start something, right? So we’re here to hopefully create another history,” said McGarry.

McGarry believes growth with the drone delivery market is inevitable. After working in food delivery for much of his life, McGarry said he believes drones are the next logical step as they can help cut down on a lot of traffic and pollution from delivery vehicles and avoid delays in deliveries getting to their destinations due to jam ups.

“They’ll be looking at it saying, ‘Okay, this is greener. We don’t have so much cars on the road, and all that,’” said McGarry.

Drone delivery has made its way into Texas in recent years, and experts in the industry have pointed out various road blocks that will need to be overcome, like a need for more launch points and to concerns over noise and privacy.

However, as McGilberry brought her food order fresh out of the sky and into her Granbury home, she said she fully expects to see more packages repelling from drones into yards in the future. What was just a dream a few short years ago is clearly becoming a reality.