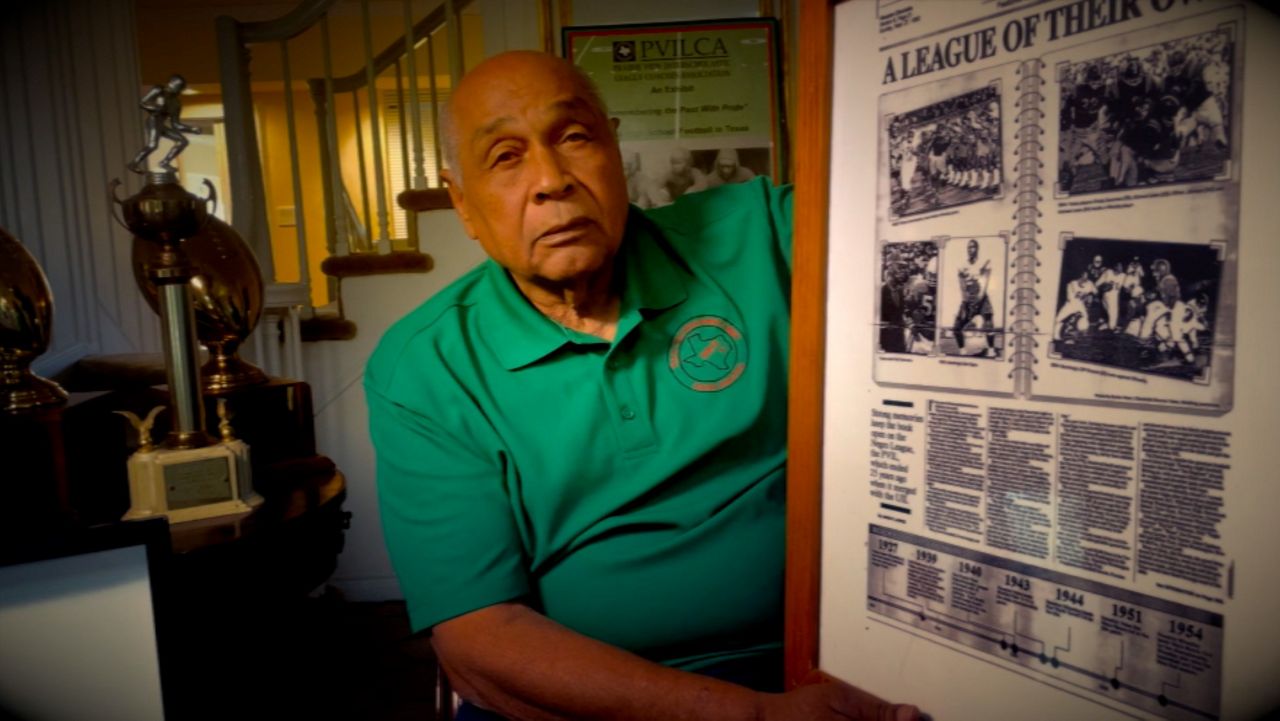 TEXAS — Texas has a rich sports history that would be incomplete without the contributions of Black athletes and coaches. The current landscape of Texas sports is where it is because of integration. Athletes like Jerry LeVias, Julius Whittier and Retha Swindell opened doors for those who followed. Now, people like Robert Brown, Toyelle Wilson, Teri Saunders and Clay Myers are keeping those doors open.

Brown is the Prairie View Interscholastic League Coaches Association chairman. Black student athletes played in the PVIL during segregation from 1920 to 1970 in Texas. As chairman, he has made it his mission to save that history.

“I guess it didn’t start as a passion, but when you’re an athlete, you try to do your best. He or she tries to do their best,” Brown said. “We’ve been able to recognize the older generation during a time when they need recognition.”

Priceless memorabilia from that era is being stored at Brown’s home as he fights for their permanent housing.

“If you don’t where you come from, you don’t know where you’re goin’. The people that donated them realized that the younger generation [needed] to know, ‘hey, you stood on our backs and if it wasn’t for us, you wouldn’t be where you are now. You didn’t do what you’re doing by yourself. We had to fight the battle,'” Brown said. “And the fight continues to get permanent housing for these items.”

SMU Women’s Basketball coach Toyelle Wilson is the first Black woman to lead any program for the Mustangs.

Wilson answered the call to become a coach after playing four years at Manhattan College. Her first head coaching gig was at Prairie View A&M, where she lead the Panthers to three straight NCAA Tournament appearances. As an assistant, she helped the Baylor Bears win a title in 2019 and Michigan to a Sweet Sixteen appearance last season.

“My college coach, [who] then left to go coach at Robert Morrison and called me up and said, ‘Hey, would you want to be an assistant coach? I think you’d be a great born leader.’ So I started coaching college in 2003, and haven’t looked back,” Wilson said.

Toyelle understands the opportunity of leading other Black women as a head coach.

“I always tell the kids, ‘you never know who’s watching you, you never know who’s listening to you,’” Wilson said. “That’s why some of our players came here, to be coached by a Black female, so every day I’m out here on the court, I know I have to be impactful. I think, to be honest, there are three or coaches on my team right now.”

Another Black woman is living in her father’s legacy while creating her own.

Pflugerville Hendrickson Tennis coach Teri Saunders is leading the Hawks to an impressive start since taking over two seasons ago. The program lacked players and culture until Saunders’ creativity came into play.

“I try to bring in as many kids as I can into my program. Even if they get cut from other teams, I’m right there and the coaches kinda laugh at me,” Saunders said. “I’m not gonna lie when I first got here it was tough, because the athletes were like, ‘Oh my goodness. I can’t believe we have practice every day. I can’t believe we’re doing this much conditioning. This coach is really on us about our grades.’ But I really had to change the culture.”

That culture is adopted from the person who taught her to love tennis.

Teri’s dad is legendary tennis coach John Wilkerson, who coached pioneers like Lori McNeil and Zina Garrison in Houston’s Third Ward. Their relationship helped Saunders achieve success in the game, gave her confidence to play a mostly white sport and deal with the challenges that come with that.

“As I take my trophy and am headed back to the car, the line judge said the last point was out, and I’m in tears at the point because I didn’t know what was going on,” Saunders said. “But my dad knew because he remembered that judge from when Lori and Zina played. I ended up having to win the match all over again. It was the first time I realized that it was different for me than it was for other people.”

Saunders now works to create more inclusive spaces, just like Dad, while making her own mark on the game and her kids.

“I’m a daddy’s girl. I’m not gon’ lie. It’s just been wonderful to follow in his footsteps, and also live in his legacy. And I know he’s proud of me seeing me do this," she said.

A Dallas PGA Pro is also working to create inclusive spaces in golf.

There has always been a lack of representation in golf, but trailblazers like Charlie Sifford made it possible for other greats to step up to the tee after breaking the color barrier in 1961. Greats like Lee Elder and one of greatest of all time, Tiger Woods, would follow in his footsteps. That history isn’t lost on Clay Myers, who’s leading the way for others to get involved in golf.

“It’s not that many Black golfers out there, so to play this game at its highest level has been one of the most fulfilling things of my life,” Myers said. “I go to the U.S. amateur tournament and out of 350 participants, I was the only Black golfer there. So, that kinda opened my eyes to, if I don’t do this, then who else is out here trying to do it?”

Clay wants to grow the game and move it forward.

“One of my goals now is to increase that number. Try to get more Black people in PGA membership,” Myers said.

“He was the one who gave me the kick in the rear to get into the PGA program,” said PGA Associate Chandler Gadis. “His thing is, ‘we have to change the dynamic and it starts with you. If you don’t do it then no one else will.’”

CORRECTION: This story has been updated to correct the spelling of Charlie Sifford and Lee Elder's names. (March 2, 2022)