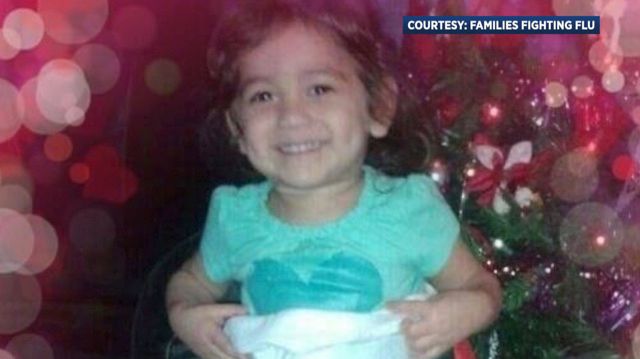 Reese Peña, a 2-year-old Texan who died in 2013 after the flu attacked her heart. (Courtesy: Families Fighting Flu)

'I never imagined that the flu would take one of my children': Mom warns of flu danger as COVID dominates headlines

SINTON, Texas — Surging cases of the omicron-fueled COVID-19 virus top headlines early in 2022, but there’s another illness that Roxxann Peña doesn’t want people to look past this time of year: the one that took her daughter nearly 10 years ago and that will likely take tens of thousands more this year, too.

Peña said Reese was as lively a little girl as you’d find in late December of 2013; wearing tutus over every outfit she’d put on and wanting to drive a race car like Vanellope von Schweetz in her favorite movie, "Wreck-It Ralph." In fact, Peña was on her way to the store to try and find Reese a toy race car for Christmas when the unthinkable happened.

Reese was sleeping soundly in her bed at Peña’s in-laws’ house when she left that morning, but she soon got a call that something had suddenly changed.

“While we’re Christmas shopping, I get a call from my in-laws and they tell me, ‘You need to come back right away,” said Peña. “They told me, ‘the ambulance is here, first responders, and Reese is not breathing.’”

Peña said Reese had been running around the night before, happy as can be. Besides some mild cold symptoms she said the 2-year-old was quite healthy and would only occasionally deal with febrile seizures when she ran a fever.

The South Texas mom said she immediately thought that perhaps Reese had just experienced one of those seizures for some reason, but before she even got back to the house to see for herself, a second call came.

“The first responder got on the phone and said, ‘I’m sorry to tell you, Mrs. Peña, but she’s gone,’” said Peña, pausing as she remembered that moment.

Peña said she waited for agonizing days, not knowing how her daughter had gone from seemingly fine to gone so fast. When the autopsy finally came back, she said it revealed that Reese had actually had influenza and it had attacked her heart.

It’s a rare situation but does happen as the yearly strains of influenza turn deadly every year.

“A lot of people don’t realize that every year, healthy individuals can have severe problems or even death; young and healthy people,” said Dr. Kevin Taheri with Breathe ENT in Cedar Park.

Important stats to remember as, again, according to the CDC, we are within the range right now for what’s considered "peak flu season." The illness usually fires up in the fall and generally peaks in February. Though this year and last, COVID 19 continues to get more attention and causes more widespread issues, that doesn’t mean that the flu isn’t a problem.

In fact it’s quite the opposite. Dr. Taheri said he’s seen more patients for COVID this year, but has also seen a number of people coming into his office testing positive for both illnesses at the same time.

“We have seen some people that have been double positive, what we call ‘flurona,’” said Dr. Taheri.

In Dr. Taheri’s experience, the cases have been mild, but he said both illnesses certainly have proven very severe and very serious for many people who contract them.

Peña certainly knows just how bad the flu can get, and that’s why, since Reese’s death, she’s teamed up with the nonprofit group Families Fighting Flu to become one of their biggest advocates for the yearly flu shot. She said she skipped the flu shot with Reese to avoid the possibility of giving her a fever and making her go through a seizure, but now she’d gladly take that minor side effect if she’d known it could have potentially saved her daughter’s life.

Peña said to possibly prevent her pain in another family, another child, she’ll gladly share the painful story again and again with anyone who will listen.

“I don’t wish that position on anybody. If we can prevent it, that’s what I want. I want her [Reese] to be able to help other children,” said Peña. “I never imagined that the flu would take one of my children.”

Dr. Taheri said it’s still not too late to get a flu shot this season and that patients can even get it at the same time as a COVID vaccine or booster shot. He stressed that the COVID vaccine will not protect people against the flu, despite some misconceptions out there that it will.