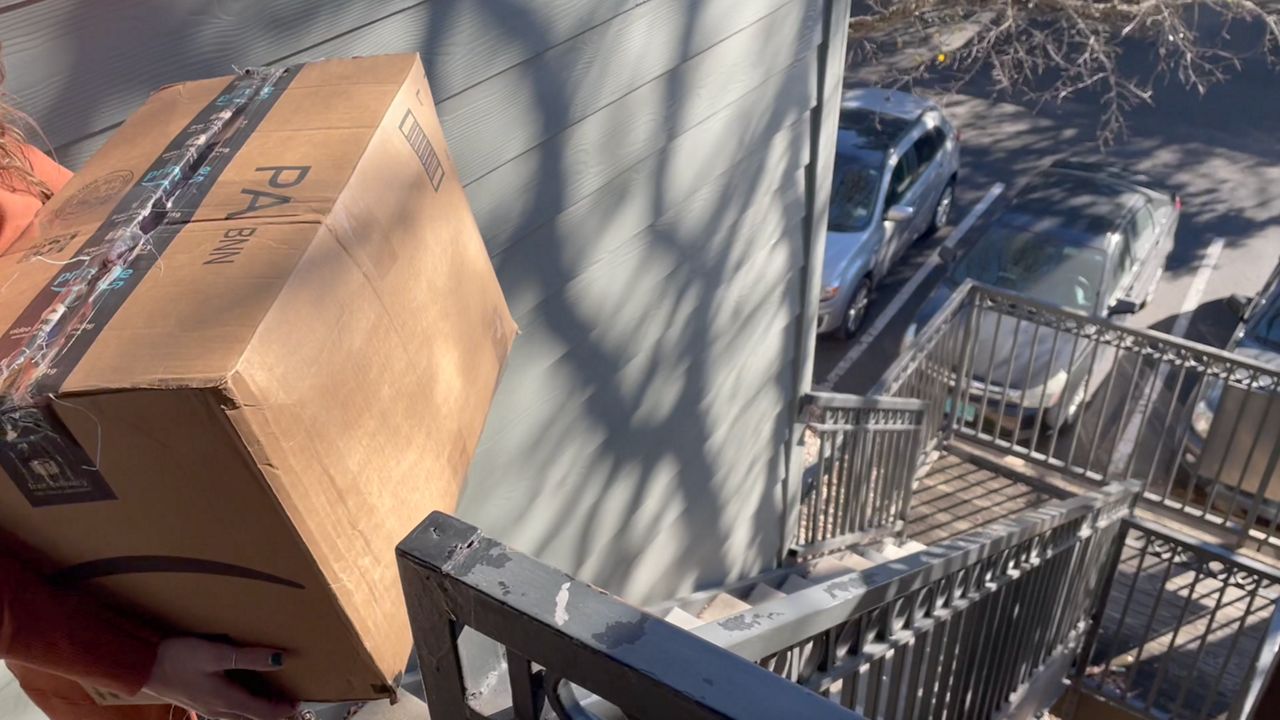 Kerri Moutos packs up her apartment to move somewhere else in Austin. (Spectrum News 1/Charlotte Scott)

AUSTIN, Texas — Kerri Moutos, an Arkansas native living in Austin, is packing up her car and moving. When her apartment's management company sent her a renewal offer that was significantly higher than her current rent, she decided it was time to go.

Moutos has lived in Austin for three years. She considered renewing her lease because she says she can afford the increase. But Moutos has had various issues with the apartment, including power outages during the summer, being locked out of the online payment portal and unresponsive building managers. When Moutos asked to negotiate the increase, management offered a $30 discount.

“If my apartment were to go up $200, $300 every year, then eventually, I probably wouldn’t be able to afford it,” she said. “So, [I’m just] changing my lifestyle a little bit because I don’t want to have to go through that.”

Moutos decided to give up her one-bedroom place and move into a rental condo with a friend. She's looking forward to having a landlord instead of a management company, saving money on rent, and sharing utility expenses with another person. But, she'll miss her privacy.

“It’s going to be weird having not my own space anymore,” Moutos said. “I have all the furniture and everything for a one-bedroom, so now I’ll be either fitting it in the condo or selling it.”

POLL for Austin-Round Rock residents: Has your rent increased in the past year? 🏘️💸 @SpectrumNews1TX

Moutos feels lucky that she is able to stay within city limits. She considered getting her own place in a suburb, but her friend said she needed a roommate in Tarrytown just when her lease was ending. Giving up her own space was a compromise she was willing to make to stay in Austin. Part of the reason why Moutos enjoys living in the Capital City is because she's close to loved ones.

“I’ve seen more family in the past few years than I have... my entire life,” she said. “And so, it’s been really awesome to be so close to family, whether they’re in Austin, Houston, Dallas, and I love it here, so I definitely didn’t want to move.”

Nora Linares-Moeller is the executive director of HousingWorks Austin, a 501(c)(3) nonprofit that conducts research and advocates for affordability. It deals with both subsidized and market-rate housing. She talks to state and local leaders about passing better legislation to get more affordable units on the ground.

"We need to increase density or put some more incentives for developers to want to put more affordable units in the big, beautiful, retail and housing locations that they're building now," she said. "There's a lot of work to do."

“That happens when you have an influx of new people coming in, they can afford to pay the bigger rent, and so the people that are here are the ones that suffer the most,” she said.

Since Texas has no rent control, landlords will charge more if they can. That comes at the expense of renters like Moutos.

"If a market bears it, which our market is bearing it right now, landlords can raise their rent and assume that someone's going to take them up on it," Linares-Moeller said. "And if they don't, then they'll probably lower the rent so they can fill the apartments. It's definitely a market that tells a story."

Linares-Moeller says there are sections of Austin that are affordable, but in a lot of the popular areas, rent is going up.

"Affordability means affordability to everyone," she said. "There's always a level in which you can't afford the next house, right? So affordability isn't only those that are cost-burdened. But it's for anyone who really wants to find a new home here in Austin, or a new rental facility."

Some people are doing anything they can to stay in Austin, whether it's finding a roommate like Moutos or just stretching their dollars.

Linares-Moeller doesn't know if the Texas Legislature will look at rent control as an issue once it's back in session. But she says having conversations about the subject can be powerful.

And when those people leave Austin, they have increased costs beyond their move. They spend more on gas to get into the city, they might have to find child care, etc.

"My fear is that we're going to lose a lot of our Austinites, people that have been here for a while, that make our city the city that we love. Not that I'm saying anything about people that are moving here, I love that too," Linares-Moeller said. "But we really have a culture here in Austin that we really admire and love, and we don't really want to lose that. Everyone who wants to stay in Austin, should be able to stay in Austin."