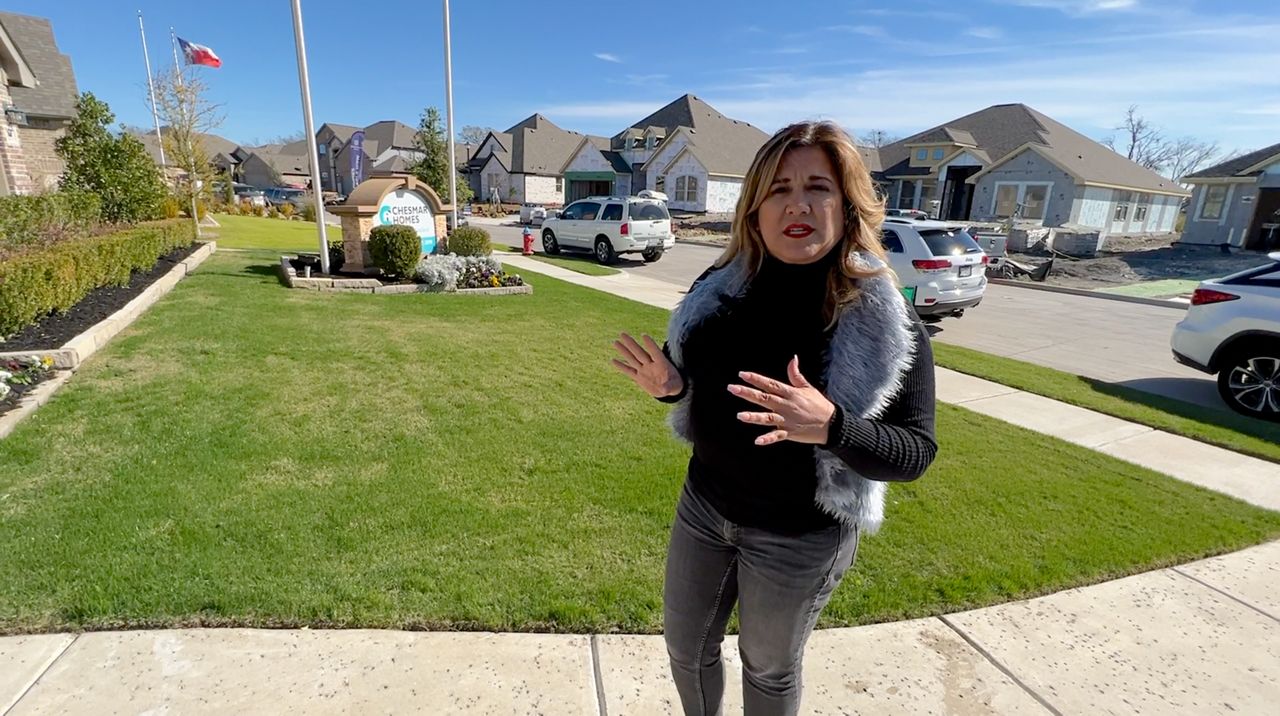 Realtor Alicia Trevino at a model home in Forney, Texas

DALLAS — Data from research economists shows the housing frenzy spurred during the pandemic is being replaced by more long-run, sustainable rates of growth. However, those with boots on the ground say that hot housing market is far from cooling down.

"It is still a strong housing market. Months of inventory are still really low. It's strong, but still you kind of reached that peak. The idea here is we kinda stabilized,” said Dr. Luis Torres, a research economist for the Texas Real Estate Research Center at Texas A&M. "So imagine you're going at 120 miles per hour and that's the fastest you went and now you're going to 90, 80, until you go back to 40 or 50, where that's like the healthy and stable velocity that you want to go at."

Home in Forney, a suburb near Dallas, Texas, that has already been sold. (Spectrum News 1)

"Texas housing sales accelerated after the pandemic shut down the economy in March and April of 2020. This caused the already depleted inventory of homes for sale to reach historic low levels and led to exuberant home price growth,” Torres said. "Some of the price pressures caused by strong demand and weak supply in the housing market have subsided. I think it's still hot and I'm not saying it's not, but getting back to more healthy levels.”

Alicia Trevino has three decades of experience in real estate. When COVID hit, she and her team were convinced they were done for, but that definitely wasn’t the case.

Trevino doesn’t necessarily agree that the home sales are slowing down, saying that there’s still a lot of action in the market right now. To find properties, Trevino said people need a good realtor who has studied the market to know which homes you should overbid for and which you shouldn’t.

“Today, if I put a house on the market, granted it has to be priced correctly, it's going to sell overnight. It's going to have multiple offers. So Dallas-Fort Worth, Texas in general, the average offers for a property right now on an existing home is five offers as opposed to other states in the nation,” Trevino said. “The market is super hot. Maybe the prices aren't jumping as high as they were, but they're still steady, growing and moving forward and moving up."

Both Trevino and Torres agree the main factor affecting home sales is lack of inventory. The time it would take to sell all listed homes right now is just one month, as opposed to the normal six months range.

“Months of inventory are around one month. Normally it was six months. At one point, they were below a month. Like 20 days or 15 days, in some cases, depending on where. That’s incredible,” Torres said.

While walking through a Chesmar Homes community in Forney, Trevino pointed out that typically, homes are being bought up before the slab is even poured.

"So data may show that housing is slowing down, but clearly you can see that it is not slowing down. We actually have a waiting list for all these homes. These are all sold and we'll have a few more available in the next couple of months and then to build them it'll take another eight months to have them finished from start to finish,” Trevino said. “You can see on the street just the amount of housing that's going up right now, all of them are under contract."