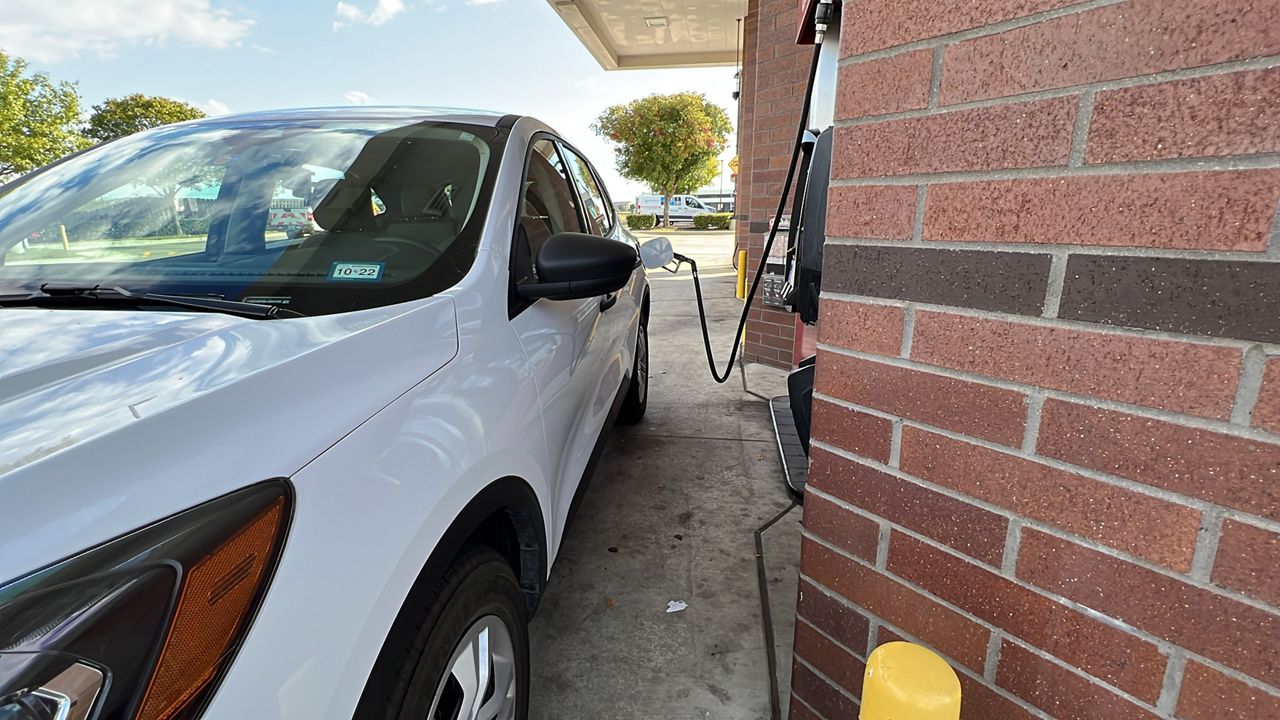 DALLAS — Drivers are still feeling the pain at the pump as the statewide average remains above three dollars for the third straight week.

“Texas hasn’t seen the statewide average above $3.00 per gallon since October 2014,” said AAA Texas spokesperson Daniel Armbruster. “Gas prices may continue to rise as demand for fuel products has been robust and there continues to be supply chain disruptions like with many other industries.”

The increase and stay in gas prices is due in large part to the cost of crude oil, closing still above $80 a barrel daily. In August, the price of crude oil was in the low $60s per barrel. Of course, this time last year, prices were nowhere near $3.00 a gallon.

"Our gas prices are set based on crude oil prices because those make up about 50% to 60% of what we pay in retail at the pump. So with crude oil prices before, when we were in the middle of the pandemic and gas was on average $1.47 a gallon here in Texas, crude oil prices were also below $50 a barrel,” Armbruster said. “With the expectation that gasoline demand, or at least crude oil demand globally, will continue to be strong, then we're going to see these gas prices hang around for at least some time.”

Despite calls from the United States and the Biden Administration pressuring OPEC and allied oil-producing countries to pump more oil and lower gas prices for Americans, the alliance decided to stick with their plan for cautious monthly increases even as prices surge and the global economy is thirsty for fuel.

The OPEC+ alliance, made up of OPEC members led by Saudi Arabia and non-members led by Russia, approved an increase in production of 400,000 barrels per day for the month of December at an online meeting.

That is in line with the group’s road map to add that amount of oil to the market every month into next year. The plan is to open the petroleum taps bit by bit — even as oil prices have surged to seven-year highs — until deep production cuts made during the coronavirus pandemic are restored.

"Certainly the Biden Administration did approach OPEC+ and ask them to increase production output on the global market, which would put more crude oil into the market and potentially bring down the price of crude oil and then bring down the price of gasoline. OPEC+ so far has denied the Biden Administration's request and it doesn't look like that's going to happen. So of course, it will now be if the Biden Administration wants to do something, they're probably going to have to go in a different avenue to try to get the prices down,” Armbruster said. "There's only so much that a president really can do. It's really up to the global market and the market forces that really control our gas prices. Not who's in the White House.”

The caution from OPEC+ means higher prices worldwide and more revenue for producing countries. Slower increases also mean less risk of increasing production too fast and sending prices suddenly lower as the group braces for the possibility of more economic turbulence from COVID-19 outbreaks this winter or from supply chain backups, labor shortages and rising consumer prices that have threatened the global recovery.

"We’re all impacted by gas prices. When gas prices go up, goods and services go up as well. And so, of course, if you're relying on your vehicle as your way of making a living, your costs, your overhead costs have just gone up significantly in the last year. And they've close to doubled, and so it's really something that if you're a driver, maybe a ride sharing driver, you're definitely noticing that you're paying a lot more for gas,” Armbruster said.

For Dallas-area DoorDash driver Brandon Lillie, filling up used to cost about about $30. Now he’s looking at about $60 per tank and barely making a profit after he’s done with DoorDash deliveries.

"If I'm not making a certain goal for the night, I don't have enough for gas tomorrow and then I have to eat into my own general family budget to put gas in my car for this job. And this job was never supposed to cost us money. It was only supposed to ever give us extra money here and there. And at times, it costs my family money to do this. And I think that's what puts pressure on me to try to be as fast as possible to make as much as possible so fast to basically tell myself that this wasn't a flop to do this,” Lillie said.

As a full time dad, Lillie's daughters often come with him on deliveries, which means being a rideshare driver isn’t feasible, which is why he chose food delivery driving. However, Lillie said the DoorDash platform forces Dashers into “zones,” and even if they take an order that forces them to drive out of their zone, Dashers must drive back to their zones before they can accept a new order.

"I'm actually on an order now where the pay is $5.25 and the trip is almost 14 miles. That's 14 miles one way and then I have to drive the 14 miles back just to get into the Zone that DoorDash allows you to work in. That's 28 miles that I just made $5 on and I have spent more in gas on that,” Lillie said. "It’s almost like customers aren't buying as much now, so now I make probably $20 a day. But I'm having to fill up more than once a week now because the jobs that you do get are paying less and they're farther. If you deny [orders] to a certain point, you get deactivated so you're no longer allowed to DoorDash."

Lillie was using his extra DoorDash income to put his daughters through preschool. With gas prices so high, being a Dasher isn’t bringing in enough to keep them both enrolled.

“I barely can afford to put gas in my car at this point, let alone have to pay for her to go to daycare. But in the beginning it was so good that I was able to enroll both of them. And my youngest was doing so good and learning. But I had to unenroll her because I can't afford any more to put them both in there,” Lillie said.

When he first started as a Dasher during the pandemic, Lillie was making enough to take his family on a vacation.

“Like it was actually almost became like a little bit of an obsession because it was like almost like free money. Because I was doing what I enjoyed, which was driving around. It was just like a diamond in the rough,” Lillie said. "It doesn't benefit my family at all like it did in the beginning."

But now, he says it’s no longer worthwhile to keep paying the high gas prices for such a low profit.

"I feel like I'm actually having to pay to deliver food now. Where I could drive for a couple hours and make a quick $100, I’m driving that same amount of time, I’m having to pay $65 in gas. So whereas I was only having to pay like $30 for gas, I’m now losing an extra $30. And $30 for all that time I just spent which equates to about five or six hours, that's not worth my time anymore,” Lillie said.

Although is may not feel like it, drivers in Texas are actually paying  the 3rd lowest gas price average in the country, according to gasprices.aaa.com. But we will all keep holding our breath for prices to level off ahead of the busiest travel season of the year approaches.