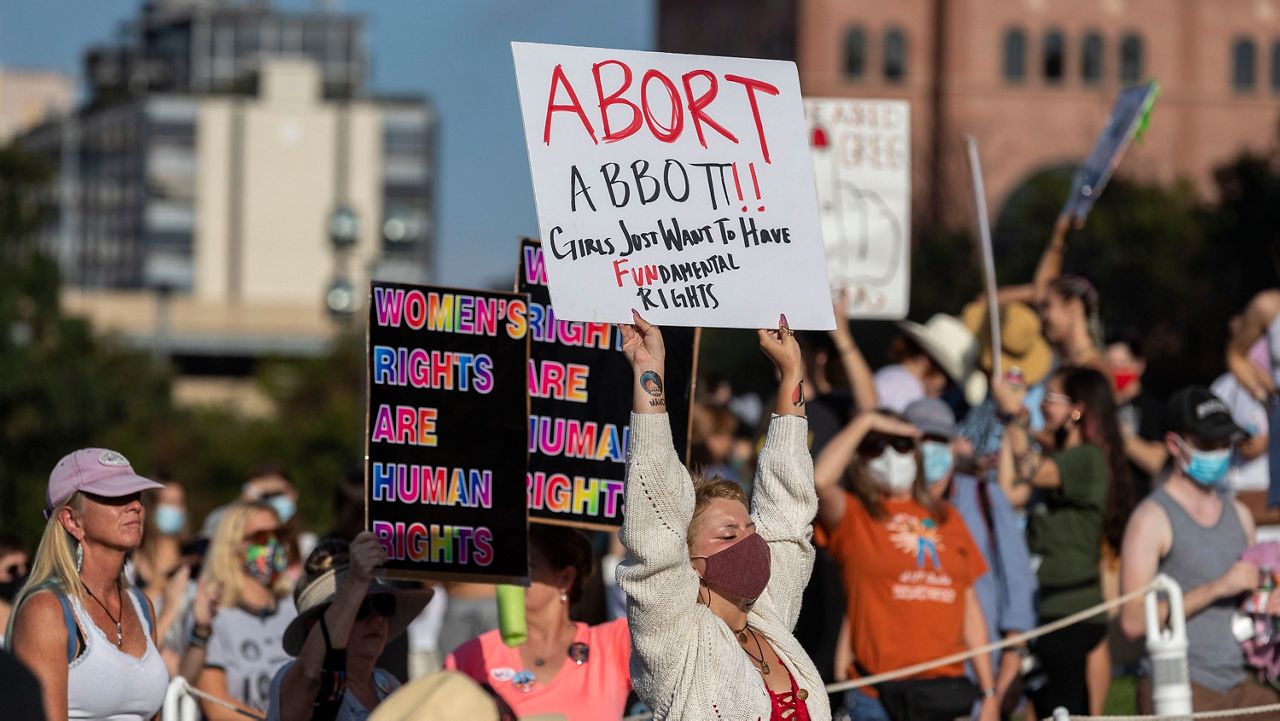 Demonstrators protest Texas' new abortion ban law, which is the most restrictive in the nation.

AUSTIN, Texas — Texas’ abortion law went into effect two months ago, but already doctors and researchers on reproduction rights are cautioning that if the ban on abortions remains in place, the impact could drive up Texas’ high maternal mortality rates, particularly for women of color.

When the law, known as Senate Bill 8, went into effect on Sept. 1, abortion providers were forced to shut down many of their clinic services; some even shut their doors entirely. That means millions of Texas women may now find it hard to get the health care they need, said Caroline Duble, the political director for Avow Texas, a nonprofit abortion-rights organization.

“I’m very concerned that, a few years down the line, if this law is allowed to remain in effect, that many more Texans will die, especially women of color and Black women in Texas,” Duble added.

The Texas law prohibits abortion after fetal heart activity can be detected, which is typically in the sixth week of pregnancy, when most women are not aware they are pregnant. The law has faced several legal challenges, two of which were taken up by the U.S. Supreme Court this week.

According to a study published in the March 2021 edition of the medical journal “Contraception,” states that restrict abortion access have far higher maternal mortality rates than those with neutral or protective abortion policies.

Researchers for the study analyzed data from 1995 to 2017 and found a number of potential contributing factors to a state’s high maternal mortality rates. While the study emphasized that it was not possible to single out abortion restrictions as a direct cause, the lack of access to abortion has historically led to clinic closures. That then can lead to a deficit in health care for women before conception, during pregnancy and after the child is born.

One of the study’s co-authors says the most concerning finding was how high maternal mortality rates were among Black and Native American women in those states with restrictive laws.

“What we know about abortion restrictions is that they are going to disproportionately impact the most marginalized people in our communities,” said Dr. Amy Addante, an OBGYN and a co-author of the study on maternal mortality. “So, people of color, people who are low-income, people who are immigrants, young people, these are people that are going to feel these restrictions the most.”

A September report from the U.S. Commission on Civil Rights found that Black women in America are three to four times more likely to die from pregnancy-related complications than white women in the U.S.

Native American women are more than two times more likely to die from pregnancy-related complications than white women in the U.S., the report found.

During the past 30 years, the disparities between the maternal health of white American women and Black and Native American women have become more severe, the report said.

Improving access to quality maternity care for women is critical, including medical care before conception as well as during the time between pregnancies, the study said. Medical care for women was critical to managing chronic illness and optimizing health; prenatal care; delivery care; and postpartum care for 12 months post-delivery, all of which are necessary for improving pregnancy outcomes, the U.S. Commission on Civil Rights report said.

In the report published in “Contraception,” the authors found that “the federal government can play an influential role in reducing racial disparities in maternal health outcomes.” Exceptions to restrictive abortion laws, such as those allowing the procedure when the women’s life is at risk, can mitigate an increase in maternal mortality.

“In theory, these laws carve out these exceptions, but it's not defined, and it's open for interpretation,” Addante said. “So as providers, we're stuck in this difficult place and saying, is this patient sick enough? Do we wait until they get sicker? It's not as black and white as people would like to think it is.”

“The U.S. has a relative undersupply of maternity care providers, especially midwives, and lacks comprehensive postpartum supports,” a 2020 report by The Commonwealth Fund concluded. The fund is a private U.S. foundation that conducts research on health care systems and access.

“Maternal mortality is at the forefront of almost every obstetrician gynecologist’s mind right now,” Addante said. “You know, anytime you have a maternal death, it is tragic and heartbreaking. And so I think as a country, we need to be saying, okay, what can we do to improve this.”

“As an OBGYN, we're constantly looking at what can we do to have better outcomes for the pregnant people we take care of, and if things like abortion restrictions could potentially be something that's increasing maternal mortality, I think we can all agree in our specialty that we don't want to see anything and after that makes things worse for our patients.”

This year, Texas lawmakers did pass a bill that extends Medicaid coverage for new moms. Advocates of expansion had been pushing for a one-year extension, but the Texas Senate reduced it to six months before passing the bill.

The legislature failed to pass a Medicaid extension allowed under the Affordable Care Act that would allow some four million more Texans to get health care. Texas remains one of 12 states that has not adopted the Medicaid extension. That has contributed to Texas being the most uninsured state in the nation, with 21% of its residents with no medical insurance coverage.

“By even debating whether or not a full year is necessary,” Duble said. “I think our lawmakers and our state leaders have made it clear that they're not prioritizing pregnant Texans.”