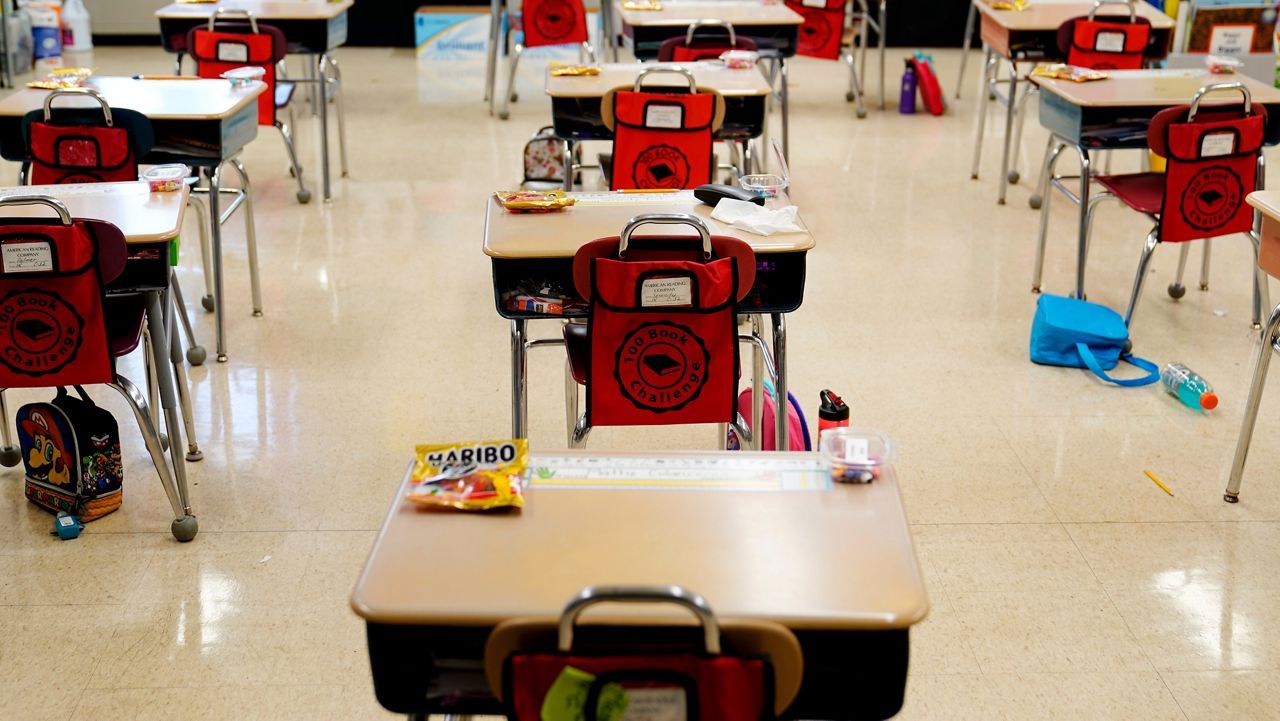 A North Texas school official is under fire for telling teachers if they want their students to read a book on the Holocaust, they must also present one with the “opposing view.”

The comment was made during a training session at Carroll Independent School District in Southlake, Texas, when an administrator was explaining how teachers should implement a new Texas law, the so-called "anti-critical race theory" legislation, that aims to restrict how teachers can discuss race and racism in the classroom.

When Republicans were pushing the bill during the regular legislative session earlier this year, critics said it was an attempt to whitewash history. Now they say this incident shows that fear has come to fruition.

One parent whose 10th grade daughter goes to high school at Carroll ISD, said last week her daughter sent her photos of her classroom, where teachers had covered up their bookshelves.

Then, a recording first obtained by NBC News began circulating.

In it, Gina Peddy of the Carroll Independent School District can be heard saying, “Just try to remember the concepts of [Texas House Bill] 3979. And make sure that… if you have a book on the Holocaust, that you have one that has opposing, that has other perspectives.”

Teachers in the room audibly react, saying, “How do you oppose the Holocaust? What?”

The backlash was swift.

Carroll ISD’s superintendent, Lane Ledbetter, issued a statement to parents in apology Thursday, saying, "As the Superintendent of Schools, I express my sincere apology regarding the online article and news story released today. During the conversations with teachers during last week’s meeting, the comments made were in no way to convey that the Holocaust was anything less than a terrible event in history. Additionally, we recognize there are not two sides of the Holocaust. As we continue to work through implementation of HB 3979, we also understand this bill does not require an opposing viewpoint on historical facts. As a district we will work to add clarity to our expectations for teachers and once again apologize for any hurt or confusion this has caused."

This comes as teachers across Texas are grappling with the new law passed by the Republican-led legislature that limits how teachers can discuss issues of race and racism in the classroom.

The GOP initiative was branded as being against “critical race theory," which is a collegiate-level concept. Democrats and education advocates fiercely opposed the bill.

“The goal [of the bill] was to have a chilling effect across the state, and make teachers afraid of having honest conversations about race with their students, which those conversations are needed now more than they've ever been needed before," said Rep. James Talarico, D-Round Rock.

Democrats say the Southlake incident is evidence of that fear coming to fruition, but Republicans who supported the bill, like state Senator Kelly Hancock, say the school administrator’s actions were a misinterpretation of the law.

He tweeted, “Schools administrators should know the difference between factual historical events and fiction. Southlake just got it wrong. No legislation is suggesting the actions this administrator is promoting.”

In response to a request for comment from Capital Tonight, Republican state Senator Bryan Hughes, who strongly supported the legislation, issued a statement saying, "This is a non-issue. The legislation condemns the evils of racism and does not call into question horrors such as the Holocaust. Any confusion about this was clarified in Senate Bill 3. Our teachers are empowered and expected to call evil for what it is. We trust them to do that."

The policy’s opponents say limiting the discussion of race and racism in the context of historical or current events, is harmful.

“It's incredibly distressing to see that anyone would consider hate or learning about racism to be a partisan issue. And I think that until we can change that mindset and recognize that fighting bias and bigotry is absolutely nonpartisan, it's just the right thing to do and to move us forward as a society, we're going to add a lot of problems," said Drazin.

Parents like Kapinos say this incident shows that the legislation is stifling conversations about race and the impact of racism in school.

“This is really just another example of why we need this kind of cultural competence, or diversity and equity, whatever you want to call the education that we're lacking here," said Kapinos.

One state senator is calling on the state’s education commissioner to take immediate action. In a statement, Democratic Sen. Jose Menendez says he wants a review of how schools are implementing the new curriculum law.

State teachers unions are also weighing in, saying, “These intentionally confusing constraints on honest curriculum have no place in our public schools in Texas or elsewhere.”