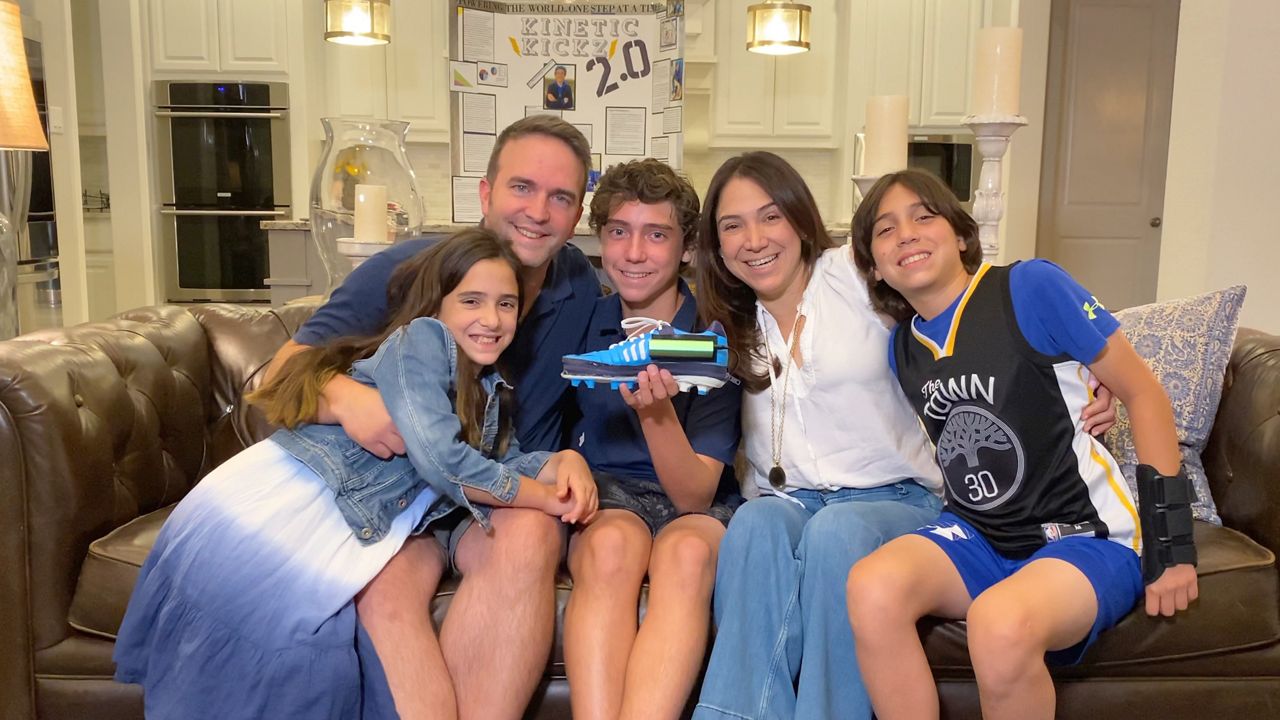 Pictured is Student Inventor, self-proclaimed serial inventor, and future World Changer Lino Marrero and his family at their home in Frisco, Texas. Lino is holding his invention called the Kinetic Kickz 2.0, an energy collecting shoe insert that could charge your cell phone. (Spectrum News 1/Lupe Zapata)

FRISCO, Texas — At 14-years-old Lino Marrero is the kind of person who believes he will achieve big things. He’s a self-proclaimed “serial inventor” and his inventions have won awards. His success and the love and support from his family gives him the drive to keep inventing.

Marrero is a 9th Grader in Frisco, Texas, and was honored recently for his ingenuity at the first Annual Invention Convention Globals presented by Raytheon Technologies. His invention, Kinetic Kickz 2.0, placed first in the 6th-8th grade category. He previously won both the Energy Award and Best Video Presentation Award for his invention at Invention Convention U.S. Nationals held in June.

"My invention collects your wasted energy from walking so you can power up devices," said Marrero. "The Kinetic Kickz 2.0 is a shoe insert energy generator housed inside the sole of a shoe that I also invented with zipper technology." 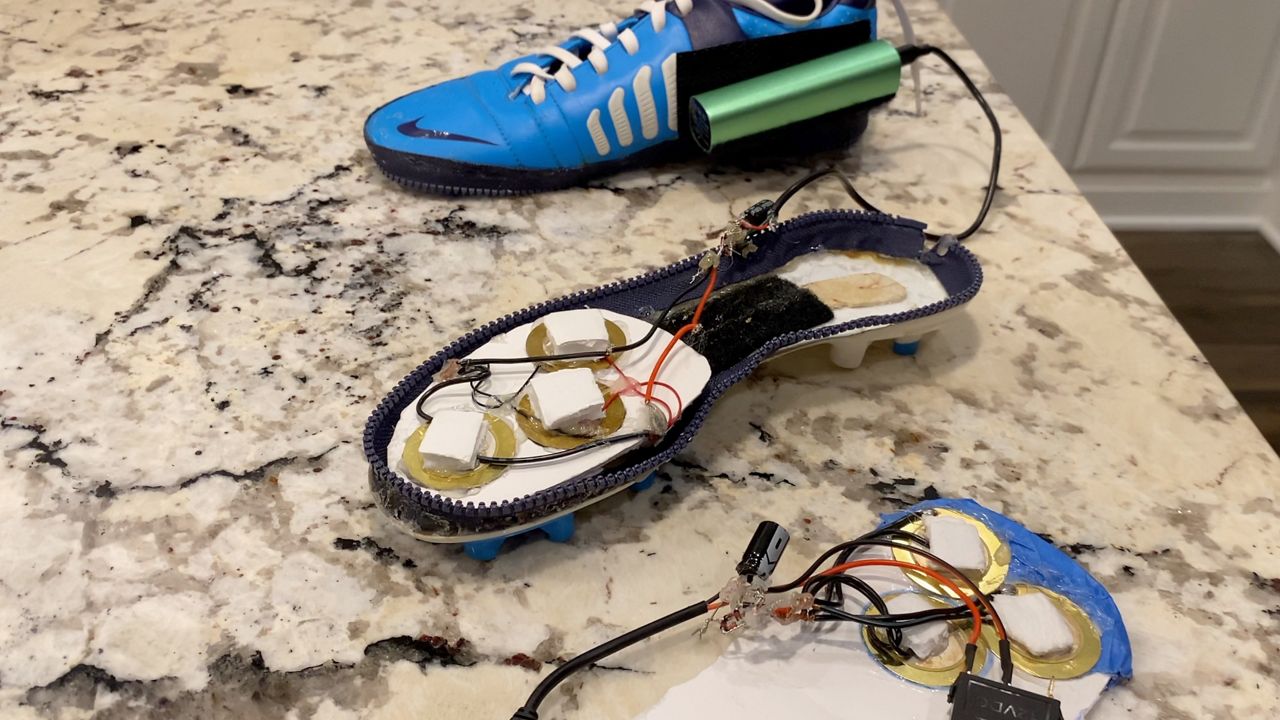 Kinetic energy is something that piqued Marrero’s interest as a lover of sports. For as long as he can remember he’s always loved being active.

“My first sport was soccer when I was four years old,” said Marrero “I played that for a while, then I played baseball. I played basketball. I’ve pretty much tried everything out there, but I really, really like tennis. It’s fun and you get to work well with a teammate.”

He’s played tennis for the last two years and is proud of his progress, so he decided this was the sport he’d focus on as he starts his freshman year at Frisco High School. His parents can attest he’s the kind of person who likes a good challenge, and it’s that drive that has him excelling on and off the court.

“I came up with the idea for my invention when I was on the soccer field,” said Marreo. “My phone was dead, and I was thinking about all the energy I just left on the field and how tired I was. I thought, ‘What if I could transfer that energy into my phone and charge it?’” 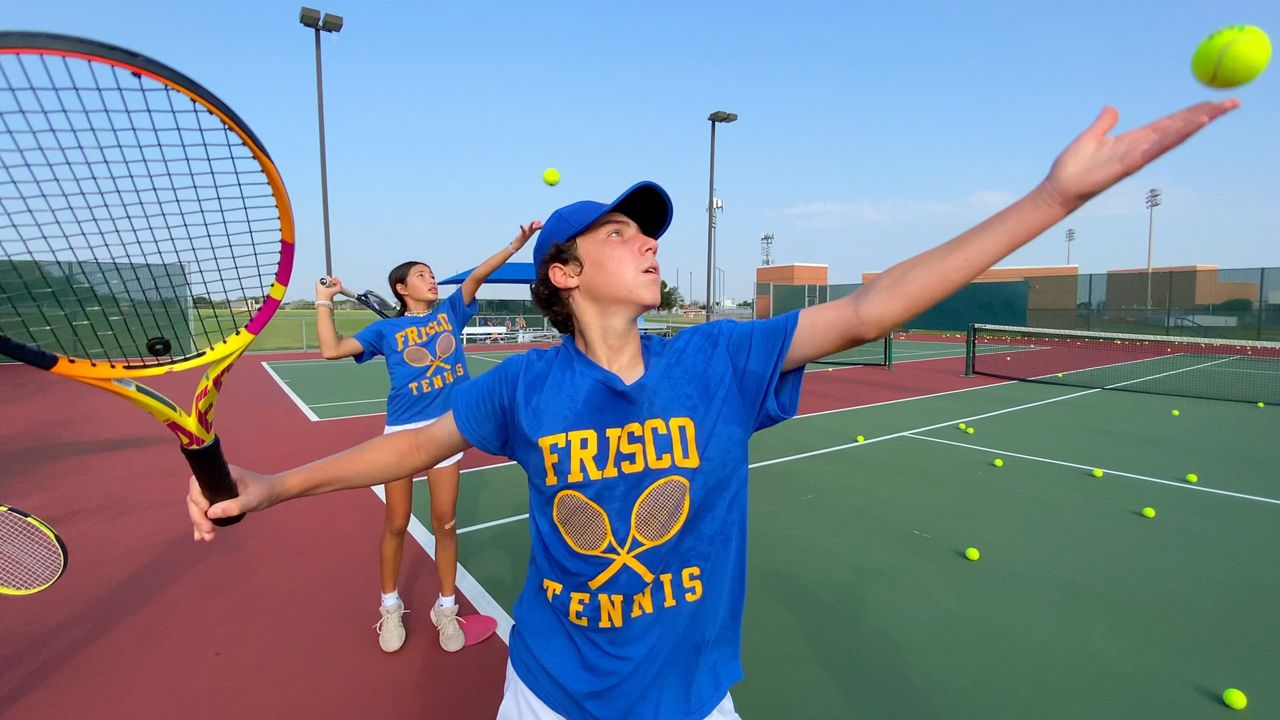 According to Marrero the battery obstacle has been inefficiently addressed by external battery packs in today's market. He said back-up battery packs are heavy, take up room, run out of battery themselves and are easy to forget. "Unlike anything in the market, Kinetic Kickz 2.0 is lightweight, you control the charge by walking and no one is going to forget their shoes at home!” he said.

He said renewable sources like wind, solar and hydro power are inefficient, too expensive or bad for the environment. “The Kinetic Kickz 2.0 taps into human kinetic energy as a new, clean alternative energy source," he said.

Marrero was among 185 students from participating Invention Convention Nationals programs in the United States, Mexico, Singapore and China who competed in the event. The virtual celebration took place on August 20 and was hosted by Gray Bright, senior director of development at Hasbro, with special keynote speaker William Kamkwamba, author of “The Boy Who Harnessed the Wind.”

Invention Convention Globals participation was by invitation only. To participate, students were required to submit a video presentation of their invention, a prototype, an inventor’s log book showing the journey of their process and a display board highlighting key points of the invention process.

This wasn't Marrero's first invention to earn him an award at the competition. When he was 10-years-old he placed first in his age category with his invention the “string ring” created to help him play the cello more comfortably without a loss of sound quality.

“That was his first invention,” said Lino’s mother Sharon Marrero. “He won at the school level, he won regionals and he won state and he made it to nationals, and then we were like, we’re never going to interfere again.”

Marrero said he couldn't do it without the support from his family. They’re his biggest fans and as the oldest of their three kids, his parents said his success inspires them as adults and they can’t wait to see what he comes up with next.

“He absorbs so much, he’s interested in so much,” said Lino’s father and namesake Lino Marrero Sr. “It’s a great quality in a human being, especially a 14-year-old. I’m just excited as his dad to sit back and watch him keep going.” he said. 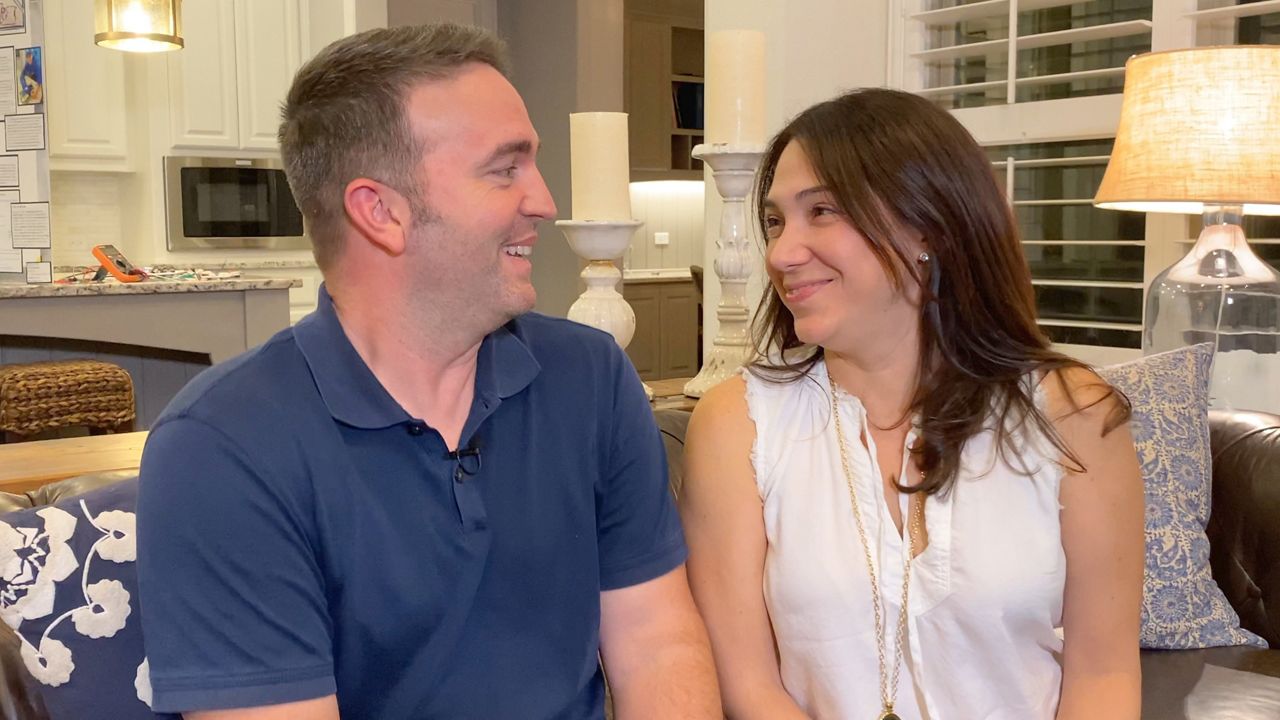 Lino's parents Sharron and Lino Marrero are college sweethearts who say their pride and joy are their three kids. (Spectrum News 1/Lupe Zapata)

Marrero hopes to one day wear his invention during a tennis match, and while he doesn’t know exactly what the future holds, he has some ideas.

“I’ve been thinking about being an engineer, or a doctor or something like that,” said Marrero “I’m not really sure, one thing I’m sure of though is when I’m older I want to be a world changer. Doctors they save people’s lives, or engineers they help build things that can help improve other people’s lives. I just want to do really anything that can help.” He said his energy-holding shoe is just the beginning.

If you have an interesting story or an issue you’d like to see covered, let us know about it. Share your ideas with DFW human interest reporter Lupe Zapata: Lupe.Zapata@Charter.com.     ​