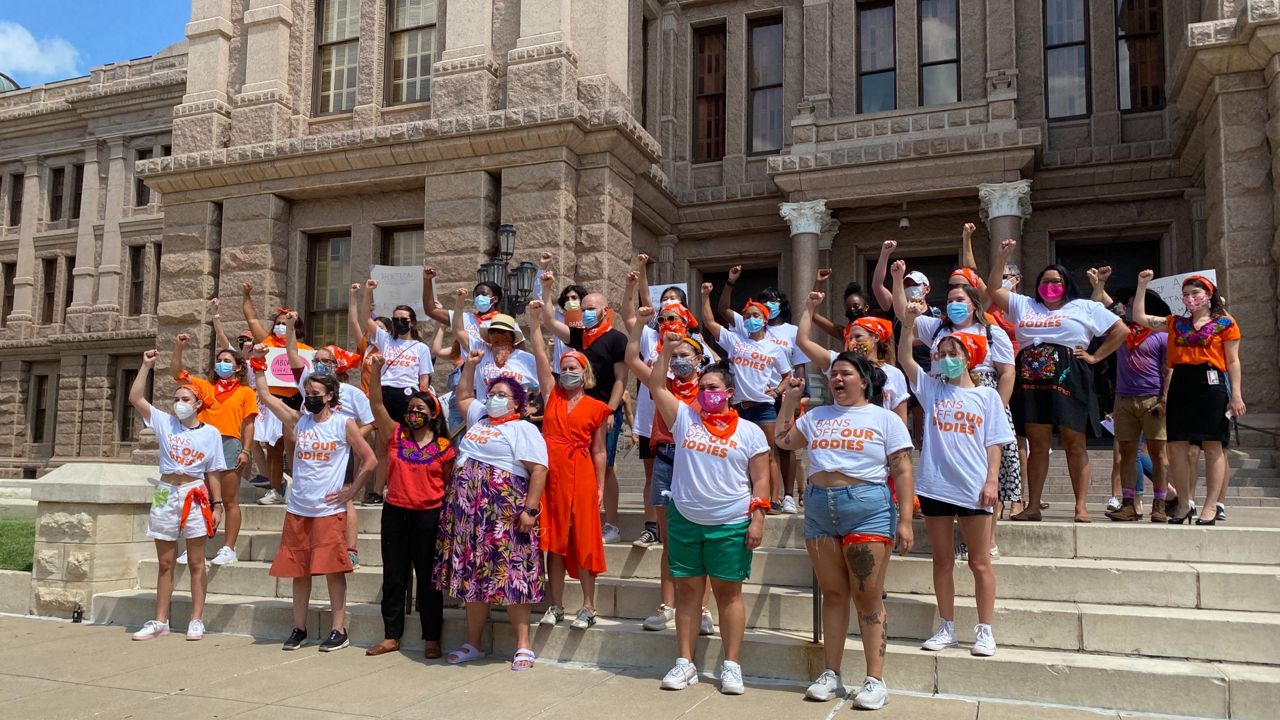 The law, which is the most extreme abortion restriction in the country, went into effect at midnight Wednesday.

It bans women from getting abortions after six weeks of pregnancy, which oftentimes is before a woman knows she’s pregnant.

Abortion providers had filed an emergency request asking the Supreme Court to step in before the ban went into effect, but with no word from the high court, abortion providers were scrambling to see as many patients as they could before the deadline.

Protesters in Austin chanted, “My body is my own! Bans off our bodies!”

Among them was 16-year-old Valerie Beck, who has a message for Texas lawmakers.

“Abortion is health care," said Beck. "It's a right that I believe all people should have access to. And when the governor and other people in Texas are trying to take away that right from people in this state, I think it's my job to stand up and speak my mind about it.”

She was part of a crowd of activists protesting the abortion law, which bans the procedure after six weeks of pregnancy and empowers private citizens to sue anyone who helps a person receive an abortion after six weeks.

“We have a right to decide whether and when we have children," said Sen. Sarah Eckhardt, D-Bastrop. "We are not going away and we're going to keep standing up for that right, even in this incredible onslaught designed to make us feel alone.”

Abortion providers are now trying to provide care for patients seeking abortions within the bounds of the law.

“Planned Parenthood health centers are still open, providing information and education. Some health centers are providing patient navigators to help patients who need to access care out of state, and we have other partners through abortion funds and others who are helping to provide the resources so that people who need to go out of state for care can," said Dyana Limon-Mercado, executive director of Planned Parenthood Texas Votes.

Legal experts say the future of the ban depends on the courts.

“We may have to wait until someone actually sues an abortion provider before we know what's going to happen. Under current Supreme Court doctrine, there is a fundamental right to abortion, and the Texas law clearly violates that fundamental right. It's also possible that at some point in the next year or so, the Supreme Court will overrule that precedent and decide that, in fact, there is no right to abortion or it can be severely curtailed," said Dale Carpenter, constitutional law professor at Southern Methodist University.

"This is the first time a measure of this magnitude anywhere in the country has gone into effect. That's the first time a state has a protection for unborn babies before viability," said Joe Pojman, executive director of Texas Alliance for Life.

“For right now, we're very happy because the law is in effect. Later on, we're hoping that the Supreme Court, which has taken up a case that calls into question whether Roe v. Wade really is a valid Supreme Court precedent... if it rules like we hope that Roe v. Wade is overturned in whole or in part."

“Roe v. Wade was never enough. Relying on this Supreme Court case to guarantee our human rights is not enough. We need to have federal protections and real laws that not only say abortion is legal, but that it should be accessible," said Rosann Mariappuram, executive director of Jane’s Due Process.

"We're not going to stop fighting for our rights and for our bodies," said Beck.

Both President Biden and Vice President Harris released statements Wednesday saying the Texas law is unconstitutional because it violates the precedent set by Roe v. Wade, and the administration is committed to defending women’s rights to make decisions about their bodies. ​

While the Supreme Court could still issue a ruling on the ban, until then, abortion rights advocates are worried that the ban will disproportionately impact women of color or low-income backgrounds who don’t have the resources to leave the state to receive an abortion.