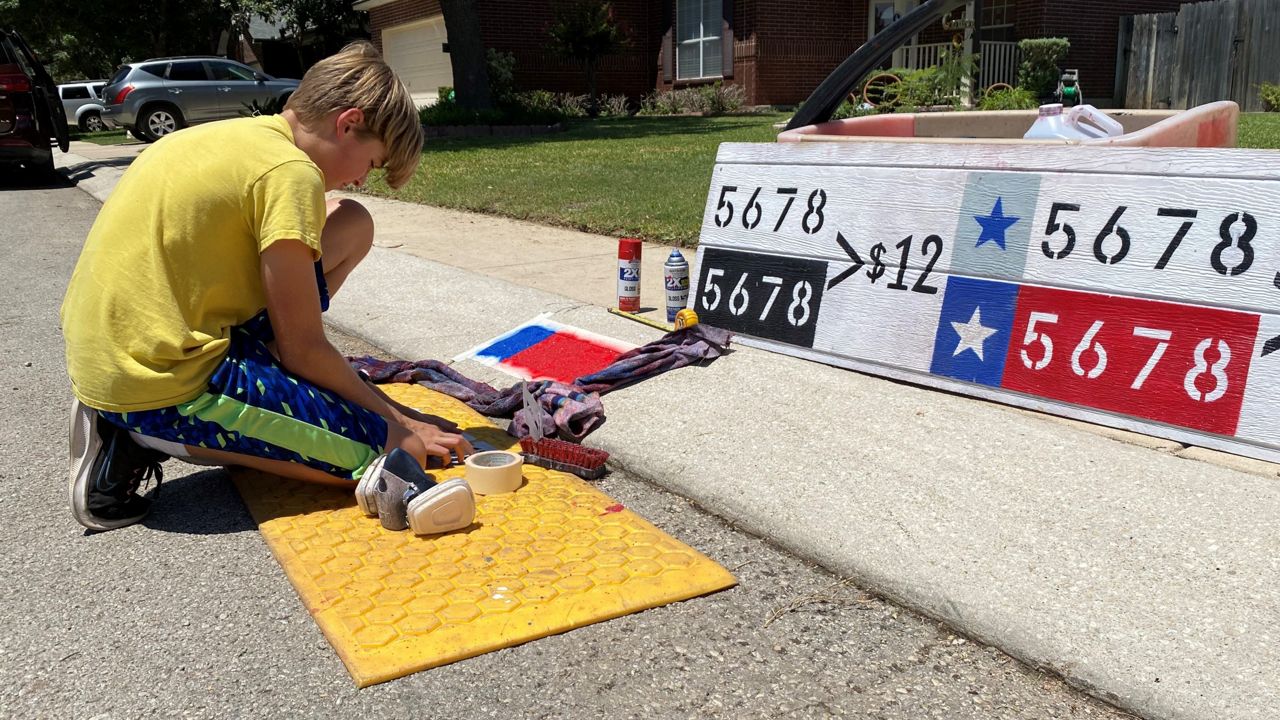 Kaiden Mantooth, 15, paints an address on the curb of one of his customers. (Spectrum News 1/Lauren Kendrick)

SAN ANTONIO — Some teens' first job is at a fast food restaurant, however, for 15-year-old Kaiden Mantooth he wants to make his mark by fixing up people’s curbs.

It’s a job where he makes his own hours and he’s his own boss.

With his trusty wagon, full of supplies, Kaiden makes his way to his first customer of the day.

“This mat was actually just given to me by a customer, just to kind of help me not burn my legs on the hot street,” said Mantooth.

His flexible schedule as a home school student allows him to work between school assignments.

“Probably the most popular is Texas right here. People just like it. We’re Texans, what can we say? We’re proud of our state,” said Mantooth.

Each curb gets him one step closer to his goal, buying a car.

“I’m one of the youngest in my family. I see all my older siblings struggling trying to get enough money to buy a car. That’s what my main goal’s been and what’s really started me doing this,” said Mantooth. “I mean, I’m only 15. My goal now is to just get the cash and then look."

After one of his customers posted about his new business on the Next Door app, he was flooded with jobs from people like Lorraine Keidel.

“At that time, he had his little sign and he was looking for people who wanted numbers put on their curb. Interestingly enough, about a year ago there was somebody in the neighborhood doing them,” said Keidel. Lorraine said it’s refreshing to see a teenager working hard to earn money for something he wants.

“Kaiden, have you got a pocket son? And a two dollar tip because you did such an amazing job. Thank you,” said Keidel.

Mantooth said he usually blocks out a few hours each time he’s out because neighbors see his work and want him to do their house next.

“One job I started and got four at the end of the day. So, it’s nice. People notice and every curb that I do is advertisement, so it works,” said Mantooth.

After several houses, it’s time to wrap up his side hustle and get back to his school assignments at home, until the next day when he can plan on going to a new neighborhood.

Kaiden only does houses near his home, for now.

His mom said they will go to farther neighborhoods if at least six people want Kaiden’s services.

They’ve had people reach out from all over the state, just to donate to Kaiden’s car fund.