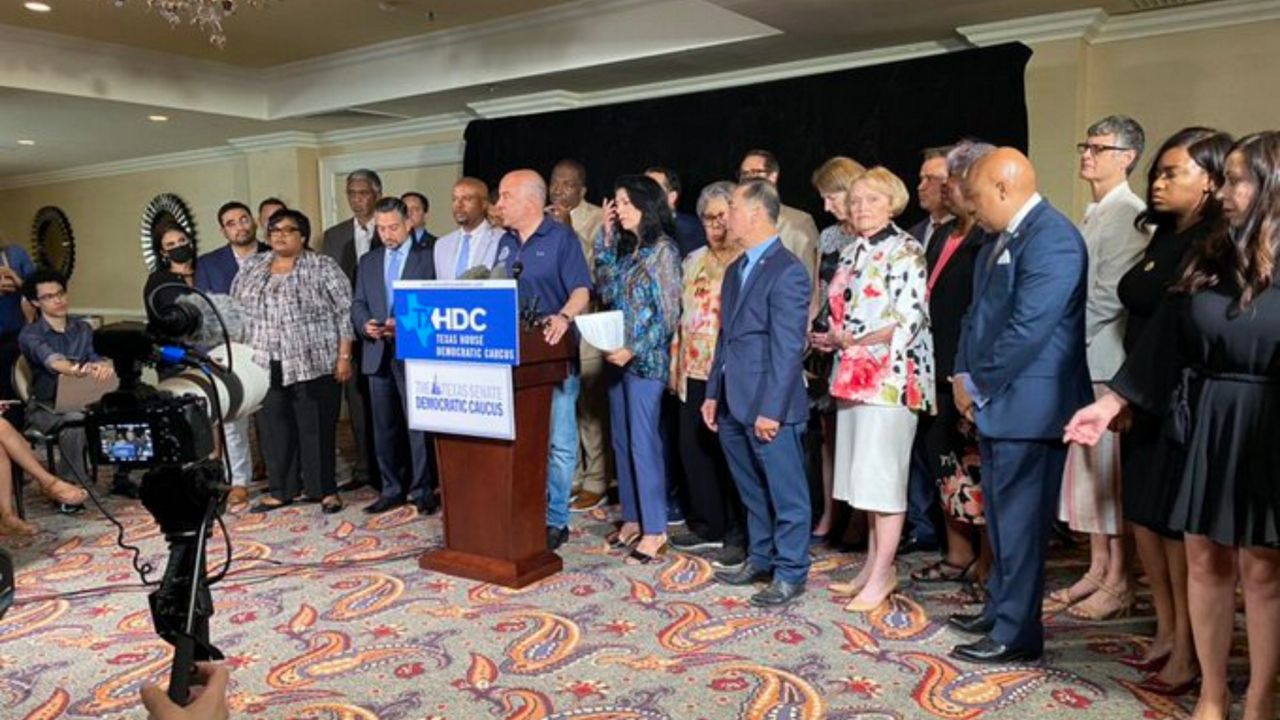 Democratic state senators and representatives from Texas who fled the state hold a press conference between their meetings with U.S. senators. (Reena Diamante/Spectrum News 1)

‘We got complacent': Texas Democrats in Washington continue push despite COVID diagnoses

WASHINGTON — Six Texas Democrats who left Texas for Washington are now self-isolating after testing positive for the coronavirus over this weekend. All of them are fully vaccinated and said they are exhibiting little to no symptoms. Officials with the Texas House Democratic Caucus said they are now doing daily COVID testing. While Texas Democrats tweaked their plans and protocols, they said the mission behind decamping in the nation’s capital has not changed.

Rep. Trey Martinez-Fischer, D-San Antonio, told Capital Tonight he is now working from quarantine. He said he tested negative on Friday and Saturday. On the Sunday that returned a positive result, Martinez-Fischer said he started the day with his usual morning routine, which includes 45 minutes of exercise.

“My test came back positive, and I was just really just, you know, a little bit of shock, because I felt so well,” he said. “These last, you know, 18 hours or so, I've just experienced some very, very minor symptoms. I'm able to work. I worked pretty much all day yesterday, I'm doing everything now virtually. Lots of Zooms, phone calls, emails, but nevertheless, you know, I feel really good."

The state legislator is one of a handful of House Democrats who tested positive for the coronavirus. Nearly 60 Democrats broke quorum to pursue federal voting protections in Washington. Come Monday morning, Democrats participated virtually in what is scheduled to be a weeklong conference on voting rights.

Martinez-Fischer said the diagnosis served as a wake-up call to question everything and get back to the basics to help stop the spread of COVID-19. He said he was one of the few lawmakers who wore a mask on the final days of the regular legislative session.

“I have talked today to some of my colleagues that have COVID without the benefit of a vaccine and I would never want to, you know, relive their experience,” Martinez-Fischer said. “What I'm dealing with, and what they went through, is night and day."

Martinez-Fischer and all the Texas Democrats on the trip are fully vaccinated against COVID.

“We never expected or believed that the vaccine would protect you 100 percent from potentially getting COVID or that infection,” said Dr. Ogechika Alozie, a member of the Texas Medical Association's COVID-19 Task Force. “I think what this does show is that those that are fully vaccinated are not sick. They haven’t had to go to the hospital and they’re not severely ill and thank God, not dying. The vaccines work to keep you from serious illness.”

Rep. Gene Wu, D-Houston, said he believes the breakthrough cases among their group serve as an object lesson. He said it was important for them to admit fault.

“We got complacent. We didn't follow the rules that we have been following for such a long time. We started to kind of get like a little bit lax about what we're trying to do. This was a reminder for everyone, in the whole nation, you got to be masked up indoors, and you got to get your vaccinations,” Wu told Capital Tonight.

On Twitter, House Speaker Dade Phelan, R-Beaumont, said he and his wife extend their prayers for the health and safety of the Democrats. Rep. Dustin Burrows, R-Lubbock, did the same, adding “there are times when we must set aside politics” and “focus on what matters most.” Still, the GOP members in the Texas Legislature have criticized their Democratic colleagues’ decision to flee to Washington. None of the Democrats took up Phelan’s offer to fly back to Texas via a private plane over the weekend.

For Texas Democrats, taking a stand is now more than putting their personal or political lives on the line. It is a health risk, too.