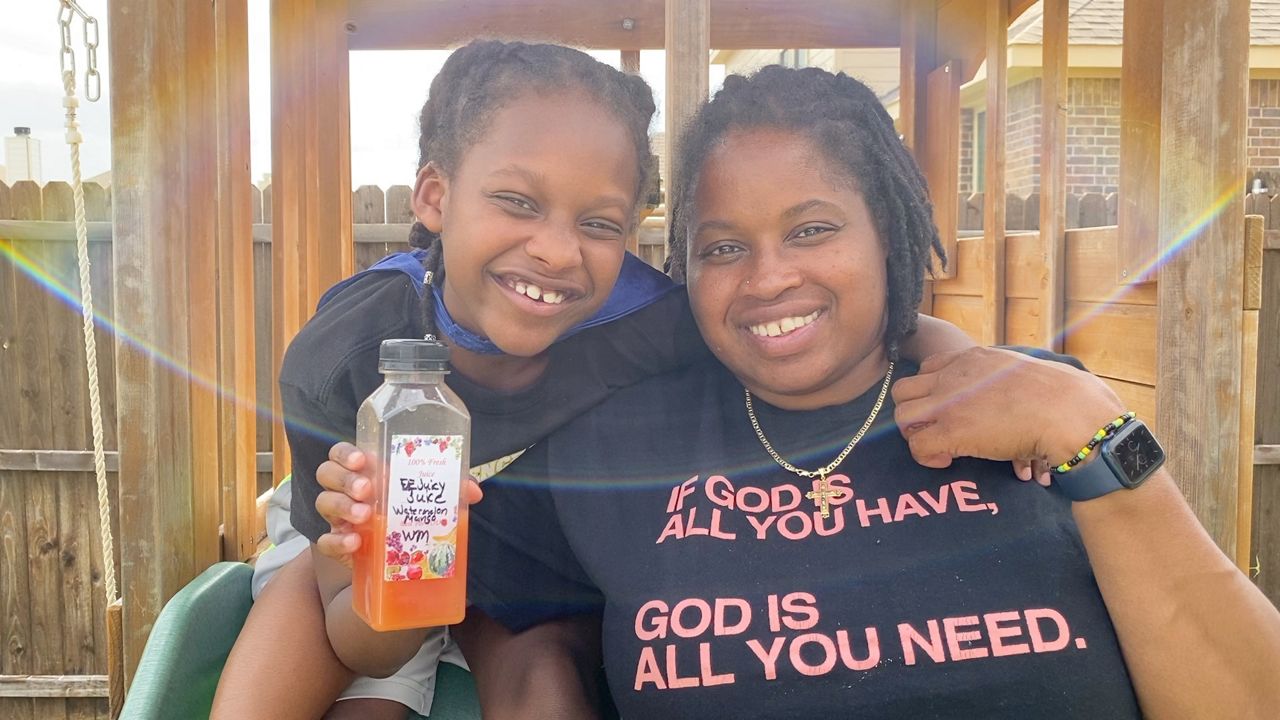 Kid Boss: 7-year-old starts his own juicing business, aims to inspire kids to be bold

DALLAS — At 7 years old, E'Syntheis Chambers is excited to tell anyone who will listen that he’s the owner of an organic juicing business.

“He’s very proud to call himself the CEO,” said his mother Roshanda White. “It was all his idea; he just has an entrepreneur spirit.”

The duo, like many Texans who own small businesses, has seen growth over the last year of pandemic. The free time at home led people of all ages to start or grow existing home-based operations.

It’s called EE Healthy Juicy Juice and for the last couple of years Chambers and his mom have perfected the process of blending, straining, and bottling their organic blends at $10 a bottle.

Chambers, who proudly calls himself a “kid boss,” claims the idea struck while he and his mom were in their kitchen making one of their favorite treats.

“It just came out of nowhere, poof!” said Chambers with excitement as he strained the juice from a freshly blended organic pineapple. “I thought of it, and I’ve been doing it ever since because I want to go on a Disney cruise, and that’s when the pandemic hit.”

They’ve grown from selling a few juice options in mason jars sporadically in 2019 to now regularly selling their 15 juice blends at events around North Texas. During the pandemic quarantine, they were able to spend more time developing their variety of juices.
One of White's favorite options is her son’s Beet Juice, made with a blend of beet, carrot, apple, and pineapple juices with coconut water.

This blend was a crowd pleaser at a Juneteenth event the two had a booth at in Fort Worth. They arrived with sixty bottles and sold them all. 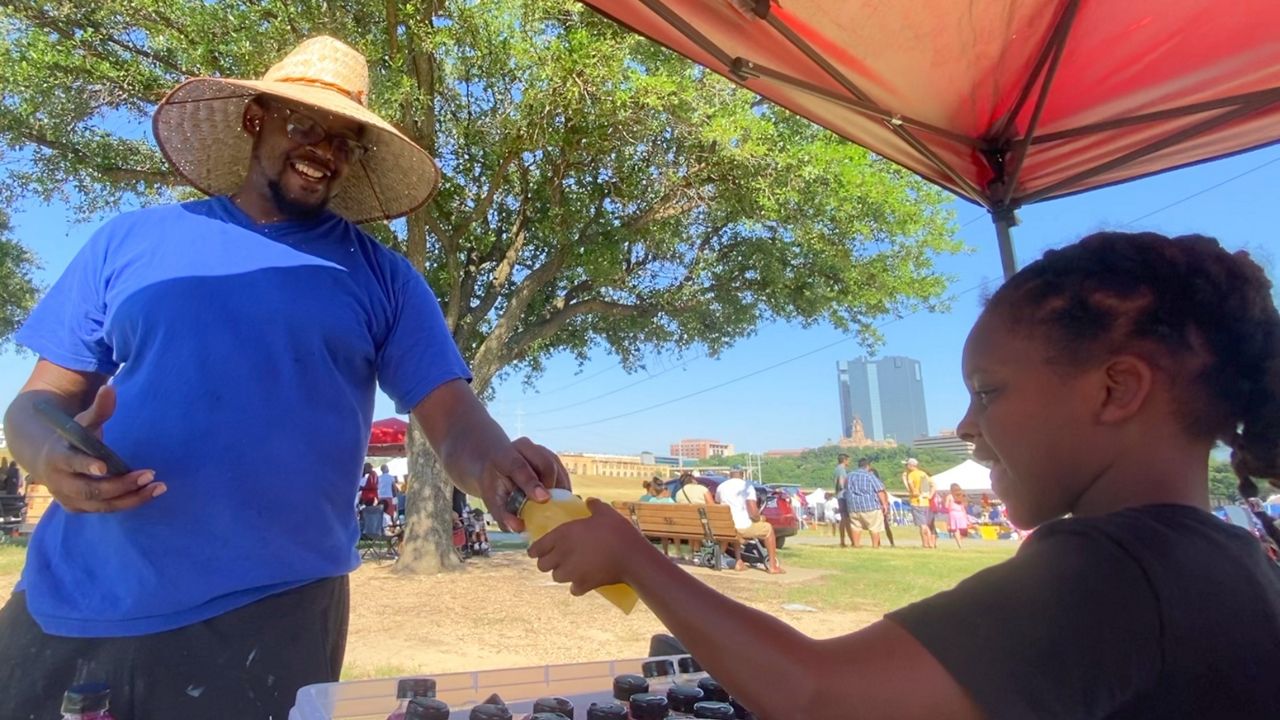 Pictured is 7-year-old E'Syntheis Chambers handing a new customer a bottle of one of his juice blends while at a Juneteenth event in Fort Worth. Chambers and his mother Roshanda White own EE Healthy Juicy Juice, an organic juicing business based in DeSoto, Texas. Credit, Lupe Zapata

White said the business has become a passion project benefitting not only her son’s “boss spirit” but her health.

“By drinking his beet juice, his green juice, and his green and ginger juice it brought my A1C from a 13, down to a 6,” said White. “I also lost a lot of weight with his juices and that helped with the diabetes, and the heart transplant too.”

Because of a long list of medical problems, soon after White gave birth, she had to have a heart transplant. She said her pregnancy was rough and she feels blessed to be alive.

“He’s kinda actually a miracle baby,” said White. “He’s what they call a rainbow baby because I had a miscarriage before I had him.” White had been told by doctors that she wouldn't be able to have children and warned if she did get pregnant, she most likely wouldn’t be able to carry full term.

Now, almost eight years later, she said her son is the biggest blessing God had gifted her. Being an example for him on the importance of healthy living is something she strives for. 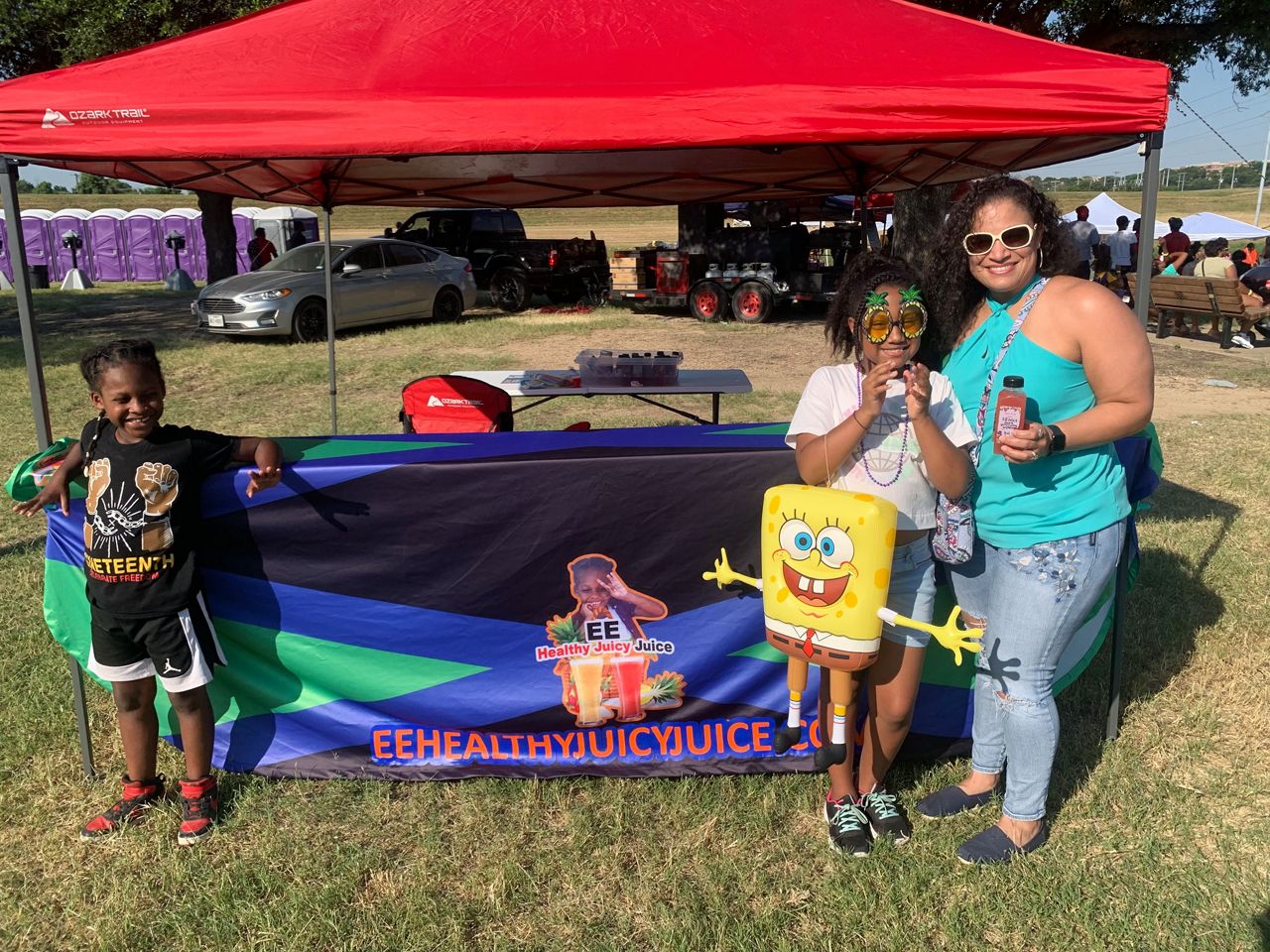 Pictured is E'Syntheis Chambers with two customers posing near his juice stand at a Juneteenth event in Fort Worth. At 7-years-old Chambers is the CEO of EE Healthy Juicy Juice, an organic juicing business he and his mother Roshanda White operate based in DeSoto, Texas. Credit, Lupe Zapata

“His name means life, because to me he gave it, and took it, all at the same time,” said White. “But he gave it back, because he is so loving, energetic, and so sweet, that’s my baby.”

Whether it’s teaching Chambers how to juice, garden, or how to be a good human, it’s safe to say White’s positive outlook on life has rubbed off on her young entrepreneur.

“Every single kid can do what they wanna do,” said Chambers speaking with zeal. “If they pay mind to it, believe in theyselves, and don’t give up!”

White said she’s set up a savings account for her son where most of the money they make goes. “I want him to be very successful and save his money so he can go to college or he can buy his first car.” 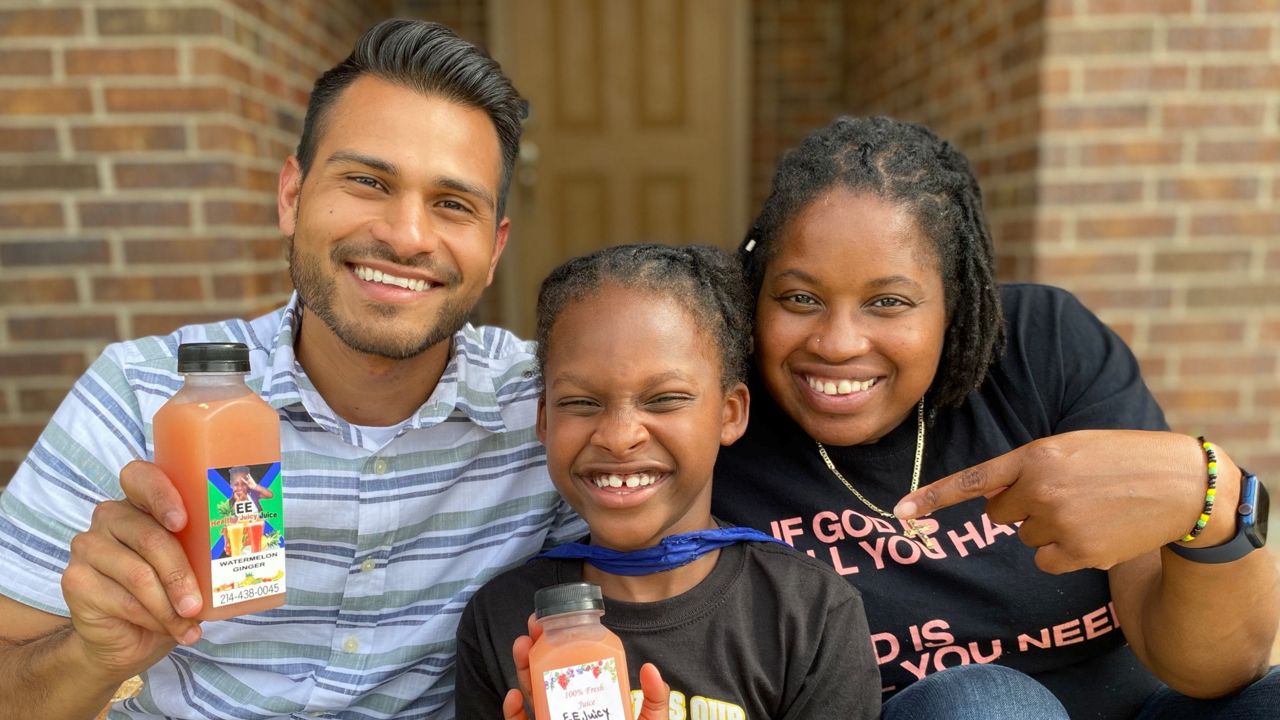 Chambers said he dreams of someday being able to finally go on the Disney Cruise that originally sparked the idea. He’d like to buy his mom a “big gift” and wants to someday own a storefront, and with the help from his biggest fan, his mom, the sky’s the limit.

“The one part you should not do in a business is giving up. You should keep trying until you get it!” said Chambers.

If you have an interesting story or an issue you’d like to see covered, let us know about it. Share your ideas with DFW Human Interest Reporter Lupe Zapata: Lupe.Zapata@Charter.com