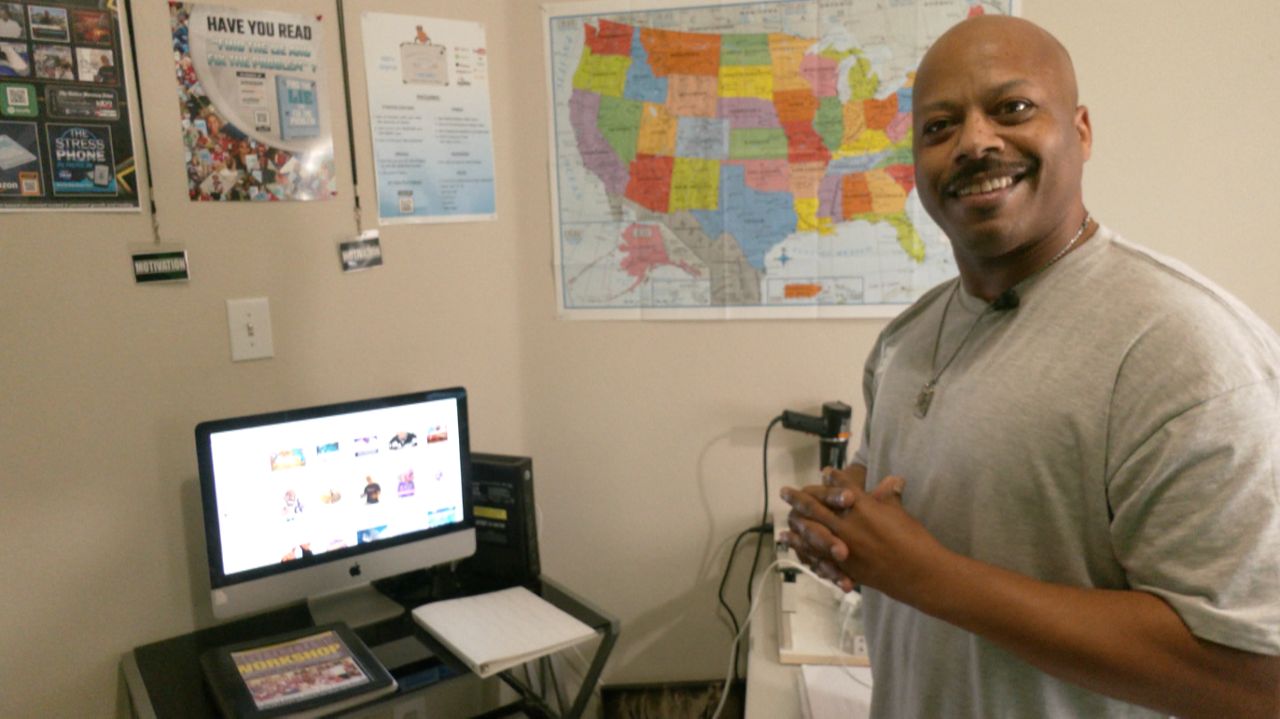 DALLAS — The walls of his home office in Dallas show the extensive and varying career paths Marcus Parker’s life has gone down over the years.

Pictures show various motivational speeches he’s done at schools and graduations, the covers of books he’s authored and the covers as well as track listings from his extensive discography as M-Positive, a motivational rapper.

“So, now I have over 50-something songs on Spotify, ITunes — no cursing, no suggestive lyrics, all motivational,” said Parker, who dedicated his life to spreading motivation after he pulled himself out of his own low point - losing it all in the early 2000s. “I was the guy who lost big after 9/11 when the tech stocks started falling off and stuff; I was heavy into ‘em.”

These days, though, Parker’s clearly willing to try any way he can to spread a little positivity and expand his legacy in the DFW area and that’s brought him to his latest venture.

The NFT, or Non-Fungible Token.

“This was a speaking engagement from 2006,” Parker said showing one of the pieces he’s created.

In recent months, you’ve likely heard mention of NFTs in the tech and business world. They’ve seemingly become one of the latest, hot new things coming out of that sphere with some artists selling NFTs for thousands of dollars and more — one even sold earlier this year at a Christie’s auction for more than $60 million.

However, if you ask most people what an NFT actually is, you’re likely to be met with either a blank stare or a vague, unhelpful answer.

“Any digital asset, any combination of it could be minted as an NFT,” said publisher and founder of Devil’s Due Comics Josh Blaylock.

Blaylock’s created NFTs that are digital collectibles, unlocked by eagle-eyed readers of his comics who catch them hiding in the pages and panels of the stories.

He says that’s really what they are — digital collectibles. Essentially, an NFT can be any sort of digital asset that represents a real-world object like a piece of art, a song, a picture or a video.

So, you’re probably asking yourself, “Why would anyone pay thousands or even millions of dollars for that when they could just search a JPG online, find a song on their favorite streaming service, or watch a video on a site like YouTube?”

Well, Blaylock says it’s about uniqueness. What makes NFTs different is that they are minted into a blockchain, that same technology used in cryptocurrency like Bitcoin and Ethereum. That technology codes and makes those currencies, or in this case the NFTs, unique items that cannot be replicated, and the coding that remains forever on that blockchain shows that the particular work is the original.

Basically, others may have a copy of the art that they get from Google Images, but if you buy the actual NFT you are, verifiably, the owner of the original.

Blaylock says the creator of that art gets to decide just how scarce it will forever be in that NFT form.

So, think of it like this — a rare baseball card may have an image on it that you can simply view or copy from any search website, but only the people who own that rare baseball card actually have that valuable collectible. You could also say it’s like having a hand-painted canvas, versus a print of the work or a celebrity’s autograph versus a copy.

The NFT’s code also holds records of who holds it and who created it, potentially allowing for artists and investors to continue getting paid as their work is sold from person to person over the years — making the NFT a new sort of investment in the eyes of some.

Blaylock says obviously this whole NFT thing speaks to a pretty niche market of people actually willing to pay up for that kind of uniqueness or investment, but he says the actual technology is what he finds more enticing —the question of what else it could be used for.

Blaylock says blockchain technology seems to be the new answer to a lot of privacy and security concerns out there in the cyber-world. He believes that the NFT is just the next evolution into how it could be used.

“You’re probably going to use an NFT to open your car door, or to start your car or to get into your house,” Blaylock said about some of the potential he sees in the technology.

Blaylock even thinks that soon the term NFT will be phased out as the technology becomes so widely used that it’ll be similar to the way society’s dropped the prefix “cyber” from many of the terms associated with the internet of today. NFTs may one day just be what collectibles and art look like.

“I believe they’re the future,” said Parker, scrolling through his NFTs.

In Parker’s case, he looks at the NFT as a further investment in his career. He hopes if one of his songs really takes off or another of his ventures gets him a breakout spotlight that his NFTs will suddenly find a demand among collectors and afford him more opportunities to spread his messages of positivity and motivation.

“Right now I have two new songs,” he said. “If we can get that viral all that does is increase the value of those NFTs.”

Just as M-Positive’s portfolio and brand continue to grow, it is only the beginning of the NFT's potential.