Police with guns drawn watch as protesters try to break into the House chamber at the U.S. Capitol on Wednesday, Jan. 6, 2021, in Washington. (AP Photo/J. Scott Applewhite)

WASHINGTON — Texans in Congress found themselves in the middle of the chaos when pro-Trump rioters entered the U.S. Capitol on January 6, 2021.

House Minority Leader Kevin McCarthy praised some members from Texas for their efforts to help hold off a mob of protesters when they reached the House chamber.

“Both Democrats and Republicans showed courage, calm, and resolve. I'd like to recognize the members now who helped to hold the line. Markwayne Mullin, Tony Gonzales, Jason Crow, Pat Fallon and Troy Nehls. Working with the Capitol Police, they ensured the floor of this chamber was never breached. These are the heroes among us,” McCarthy said on the floor that evening when debate on the Electoral College objections resumed.

Spectrum News 1 spoke with Rep. Pat Fallon, R-Texas, who represents the 30th congressional district, the afternoon after the unprecedented violence. The freshman congressman from North Texas said it was simply harrowing, an experience he will never forget, and something he did not imagine would happen the third day on the job on Capitol Hill.

Joining @SpectrumNews1TX to talk about the violence we witnessed during the most surreal third day of a new job I can imagine. pic.twitter.com/v2tIPCfSX8

Fallon said lawmakers were on their way to evacuate when violent protesters attempted to force their way through the entrance of the House floor. He said he saw his colleagues - including representatives Ronny Jackson, Gonzales, and Nehls — all first-term members from the Lone Star State — run toward those doors to help the outnumbered Capitol Police officers.

“I was surrounded by lions, and there's no way I was going to leave them. They needed help,” Fallon said.

Lawmakers and officers used furniture to barricade the entrance as evacuations continued. Fallon said he broke off the stand of a hand sanitizing station in case anyone managed to break through. He said he remembers yelling, “We’re going to protect our House.” 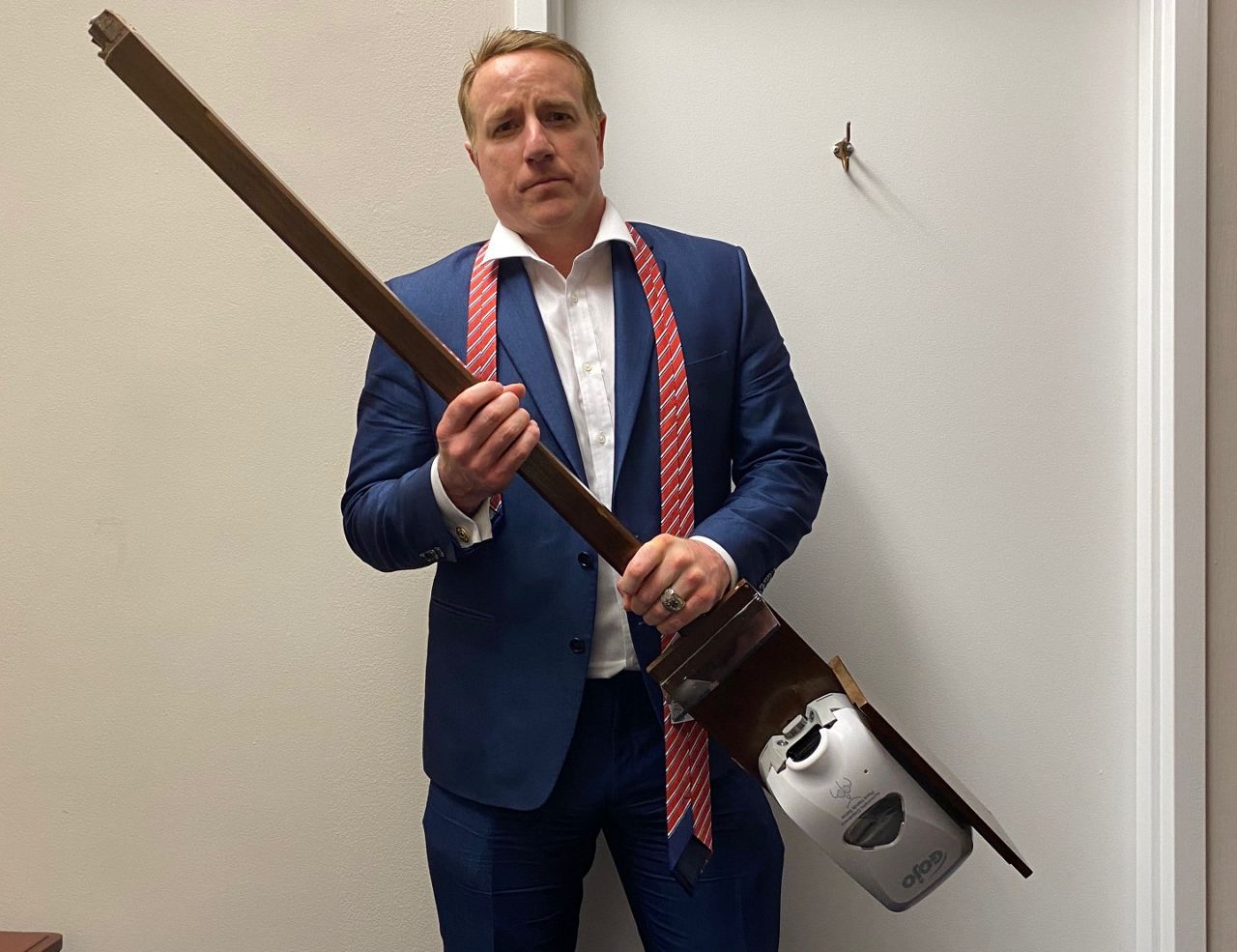 Rep. Pat Fallon, R-Texas, uses the stand from a hand sanitizing station to protect the House chamber in this image from January 6, 2021. (Courtesy: Rep. Pat Fallon)

After the chambers were cleared, members of Congress were ultimately undeterred from completing their constitutional duty to certify the Electoral College votes, sealing President-elect Joe Biden’s win.

“We have a right to express our this discontent, our dissent. We should exercise that,” Fallon said. “There's no reason in the world to grab clubs or have firearms or knives, and then go into the Capitol building when we're doing the business of the people. This is a representative republic, we were doing our jobs, and they disrupted that. So, I was very glad that we went back because we can never let the mob and law breakers, you know, win.” 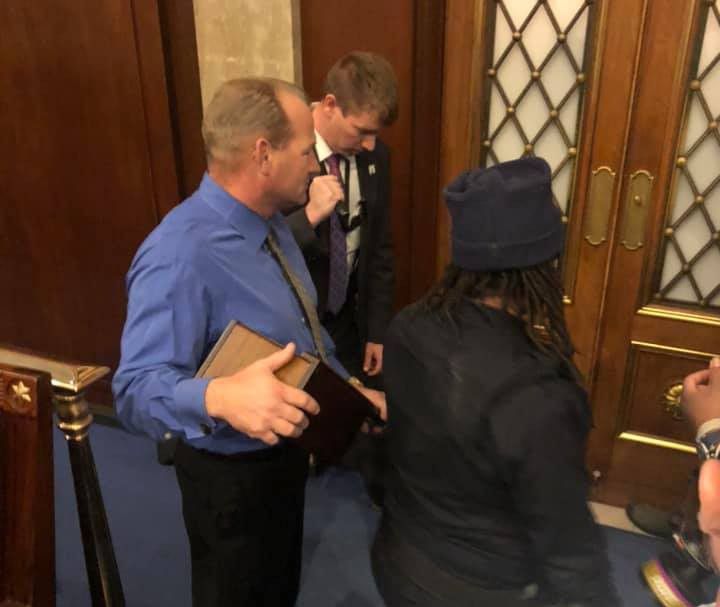 In the wake of the unprecedented violence they condemn, Fallon was one of the 17 Texas Republicans who voted to object to the Electoral College votes in either Arizona or Pennsylvania. Fallon said he believes the debate they were having on the House floor involved the Constitution and the voting process, and was entirely divorced from the violence and rioting that took place.

“It was important to me, because if we don't have election integrity, and free, honest and open elections, then we're not a republic. We're going to turn into a banana republic. I want all Americans to believe in the results, whether or not we're happy with them,” Fallon said.

Rep. Chip Roy, R-Texas, who represents the state’s 21st congressional district, was also on the floor, Wednesday, when the Capitol was breached.

“We must enforce the law. People have breached the Capitol, they need to go to jail. It's dangerous. A lot of people there with a lot of emotions running high. Look, I wish the president had spun people to —  as I said, on the floor of the House of Representatives (Wednesday) night —  to believe things that were not going to happen, and that was unfortunate,” Roy told Spectrum News 1.

The newly second-term congressman of Central Texas was one of the five House Republicans from the state who did not choose to sustain the objections. Roy emphasized the principles of federalism and honoring states’ rights when it comes to the elections process.

“That vote may well sign my political death warrant. But so be it. I swore an oath to uphold the Constitution of the United States – and I will not bend its words into contortions for political expediency,” said Roy on the House floor, which drew applause from Democrats.

Earlier in the week, on the first day of the 117th Congress, Roy objected to the seating of House members from battleground states after growing pledges among his colleagues to disapprove the electoral votes in those states.

“I believe it's critically important for our country to come together, that we respect our federalist structure to allow Texas to be different than California, New York to be different than Florida, and respect that and part of that is the presidential election process and choosing the electors,” Roy said to Spectrum News 1.

As the fallout continues, Democratic lawmakers are now taking criticism of President Trump a step further. Some are calling on the vice president and the Cabinet to remove Trump by invoking the 25th amendment and declare the president unfit for officers. Other lawmakers are outright calling for Trump to be impeached less than two weeks after his last day at the White House.

Rep. Lloyd Doggett, D-Texas, who represents Texas’s 35th congressional district, was in his office across the street from the Capitol when violent demonstrators broke through. He recalled seeing from his office the crowd of protesters surging up the Capitol’s steps.

“This was the act of sedition. Our commander in chief abandoned our country and got his supporters - who he summoned to Washington - to attack the Capitol, purpose being to stop the counting of the vote and peaceful transition of power. This president should be impeached and removed from office. Every day he is in office, even though there are a few left, he poses a security danger to our country, to our families,” Doggett said.

We witnessed depths to which Trump has driven our country. His insurrection failed to prevent Congress from counting votes rejecting his reelection. Every day he remains in office our security is endangered. I support immediate removal of this unfit, unhinged, seditious President