It's time we give credit where it's due. The GFS American computer model is consistently doing better than its European counterpart in predicting the path of tropical storms.

This is huge news because for many years, the ECMWF model (European Centre for Medium-Range Weather Forecasts), typically referred to as the 'Euro' model, would consistently beat the GFS American model.

The GFS model underwent a massive overhaul that was years in the making. Technically, it's now the GFS-FV3, but everyone still calls it the 'GFS.' Using new supercomputers and a new dynamic core, the GFS now has a higher level of accuracy. This major overhaul went into effect in 2019, with upgrades thereafter into 2020.

Computer modeling isn't simple and can take years of collaboration between government, university and international scientists to make improvements and corrections. I learned this firsthand when I started my career at the National Weather Service headquarters before getting into the broadcast side of the business. I have a lot of respect for the scientists in this field that keep moving us forward in weather prediction.

We started seeing better results with the GFS in the spring of 2020. The 2020 hurricane season was an active one which gave us a lot of real-world observations very quickly.

By the time we had gotten through July, we were discussing in our weather center how impressed we were with the accuracy of the GFS compared to previous years. It had done a great job with storms like Hurricane Isaias and many others.

So when August rolled around and Tropical Storm Laura formed, we felt a lot more confident in providing an accurate forecast based on the GFS guidance. This was the storm that shined a light on how accurate the new GFS was. 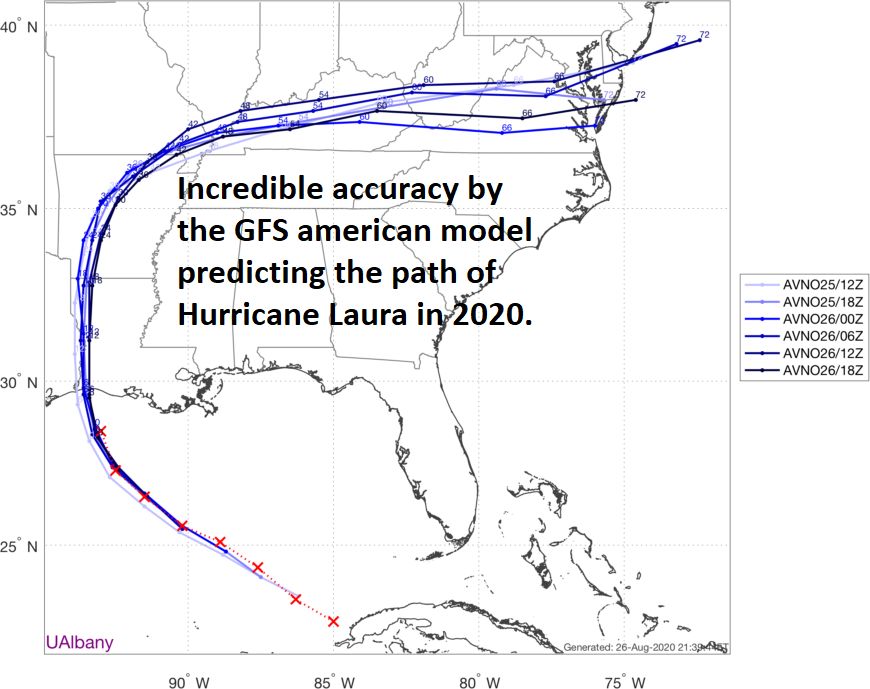 Not only did the GFS accurately predict Laura would track toward western Louisiana, but it also accurately forecasted a stronger intensity. That ended up being very accurate guidance.

We leaned heavily on the GFS and expressed urgency that western Louisiana would likely get hit hard. The Euro model, on the other hand, predicted a farther west track toward Houston, Texas. That never happened. 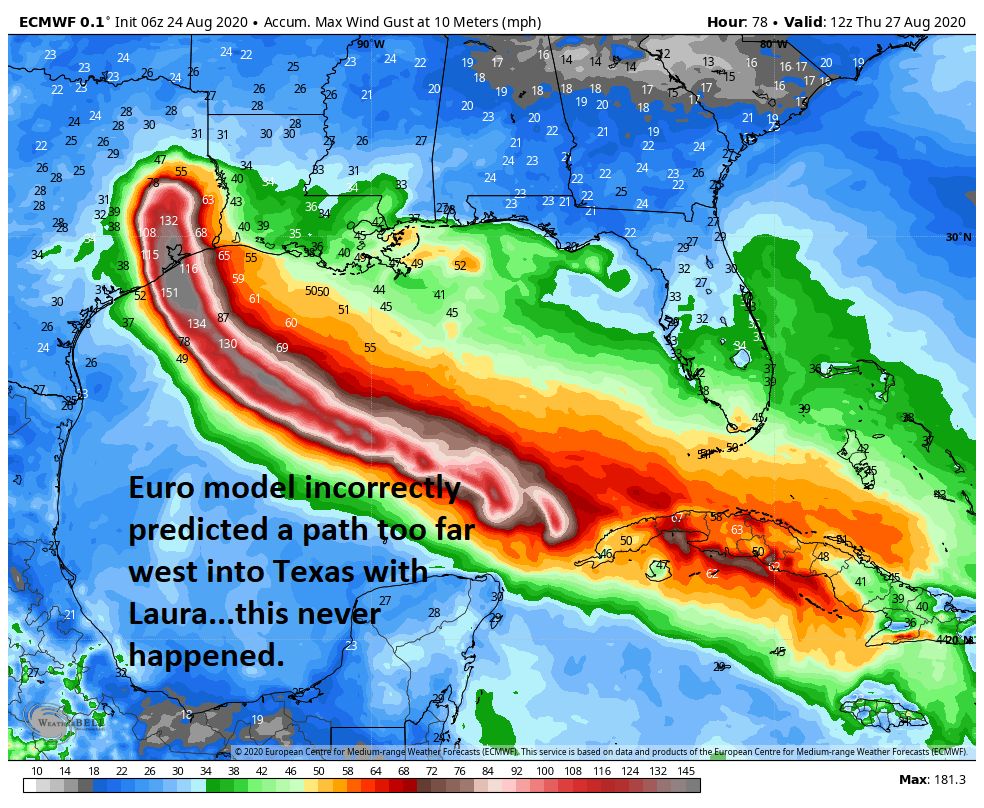 As an operational meteorologist, I look at computer modeling every single day. This results in thousands of computer model views each year, which allows me to confirm trends and biases from all the models.

After all, there's no such thing as a perfect computer model. It's my job as a professional to interpret the data and relay to the public the best analysis based on these trends.

The GFS gave us a head-start on the idea that Hurricane Eta would form and likely move north to affect Florida. That panned out as the storm tracked directly past Tampa Bay.

By the end of the 2020 season, we realized the GFS had been a lot more accurate than in past years. That gave us confidence coming into 2021.

The GFS didn't disappoint, as it continued to provide accurate guidance with the tropical storms at the beginning of this season. In late June, the GFS kept hinting that a tropical wave crossing the Atlantic would likely develop. Sure enough, on July 1, Tropical Storm Elsa developed.

At that moment, the GFS already pinned down that Elsa would likely move directly up the west coast of Florida. That's exactly what happened five days later. 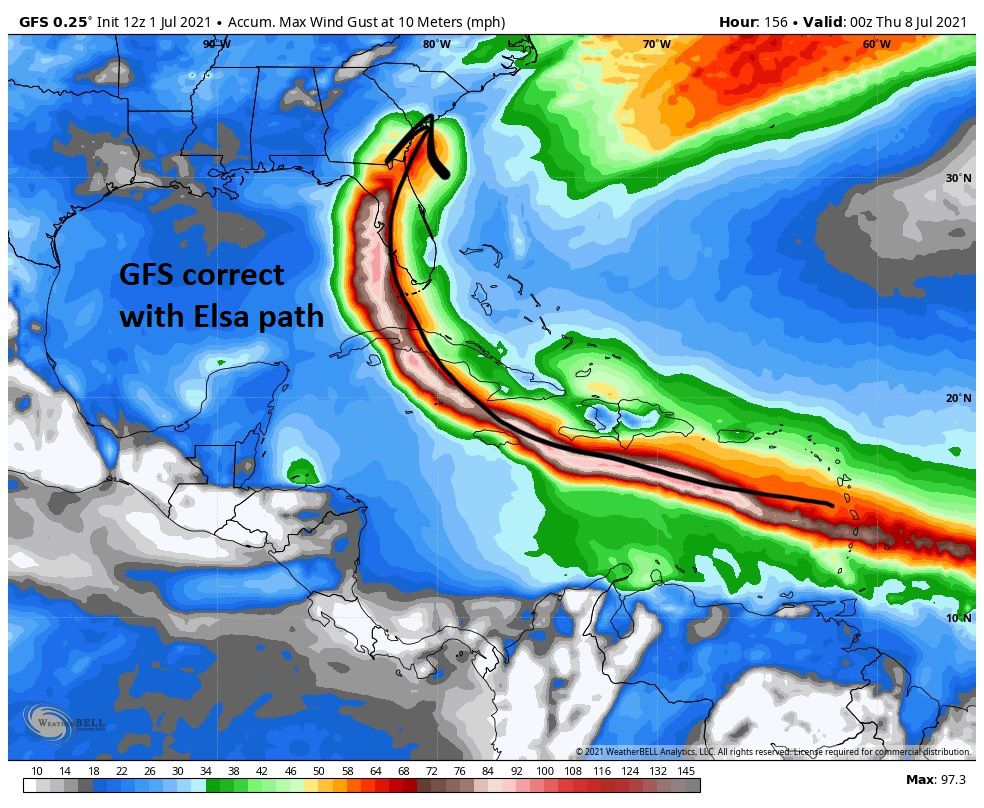 Meanwhile, the Euro model incorrectly thought Elsa would either dissipate or move well east of Florida. We had confidence in the GFS after all the examples from the previous year and started warning Florida that a hurricane was likely on the way. 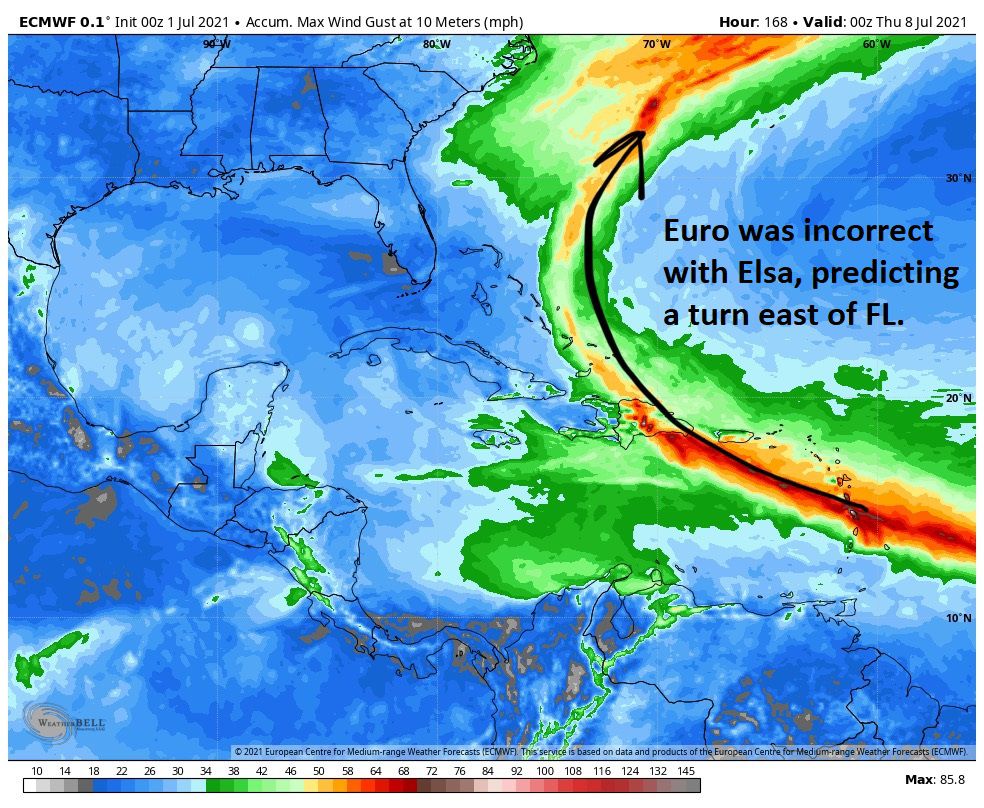 The Euro model was wrong, and the data proved afterward the GFS had the best track score with the lowest error. The GFS was almost identical to the official forecast track, which is very rare for computer models. 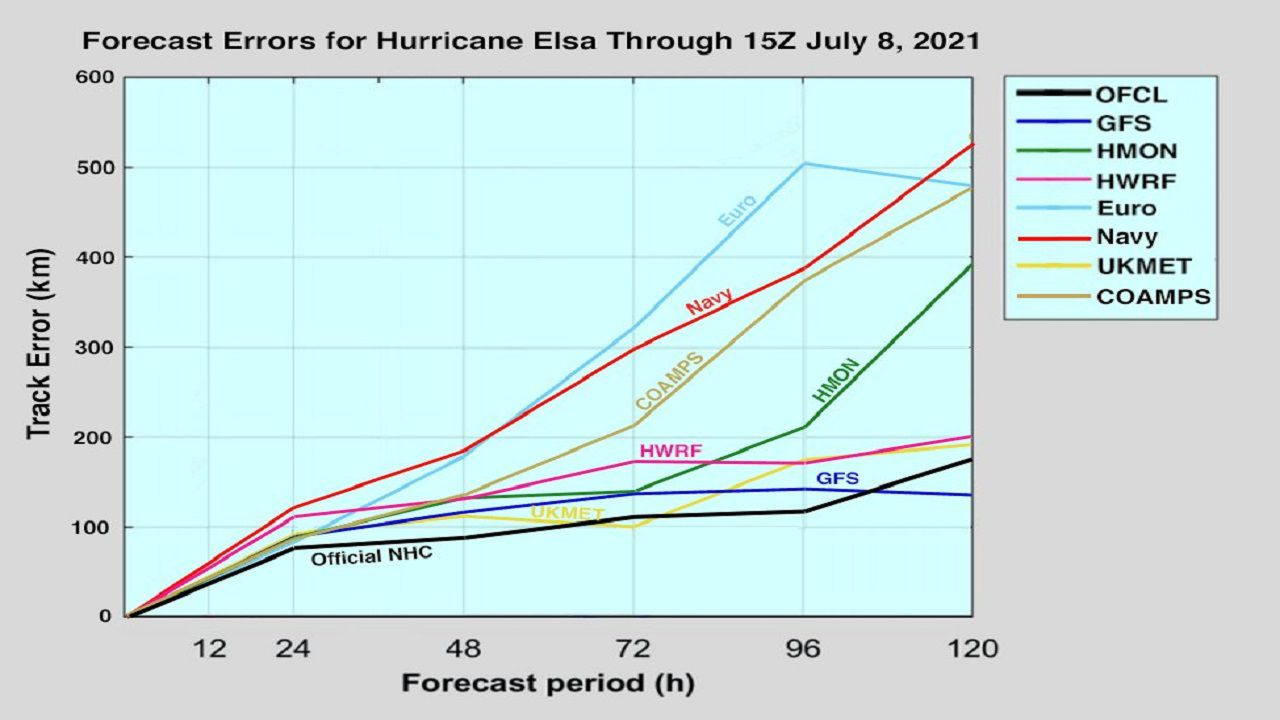 Now obviously, there's no such thing as a perfect computer model, and the GFS continues to have its hiccups and errors.

The main point is that it has improved greatly and consistently beats the Euro model (and many others), which is a big accomplishment considering how poorly it did just a few years ago. 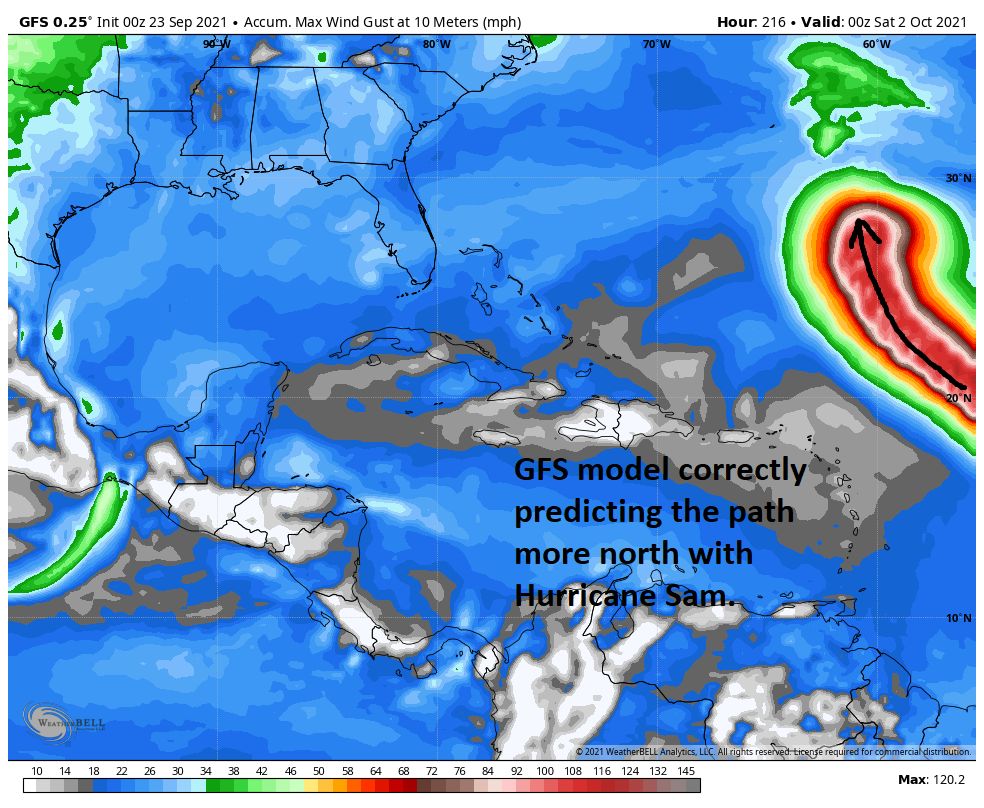 Just this week in the most recent example, the GFS accurately predicted a week ago that Hurricane Sam would form and miss the Caribbean islands to the north with a northward turn.

The Euro predicted a more southerly path, going west near some of the Caribbean islands. Luckily, Sam is staying on its northerly track away from land. 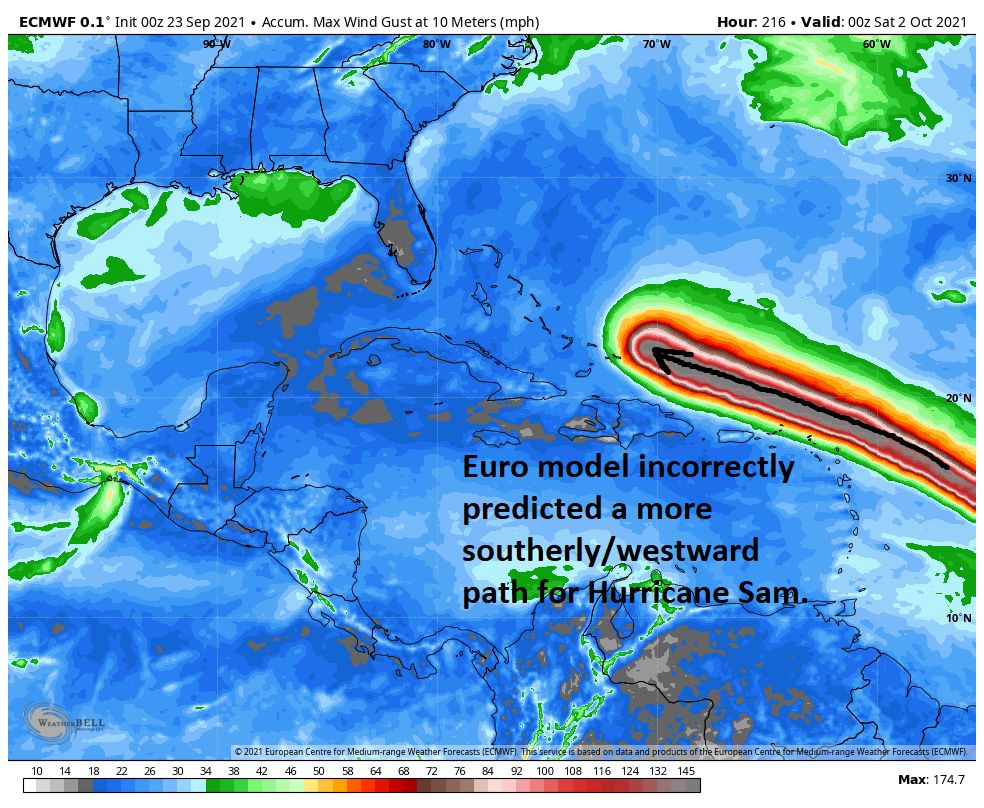