The Last Time This Happened: Recalling the 1989 Cold Wave

In December 1989, I was chief meteorologist at the NBC affiliate in Waco.  I covered and experienced the big cold wave, the last time extreme temperatures like this were experienced in Texas.

Keep in mind, computer models were not nearly as sophisticated as we have today and there weren’t many of them.  They plotted on paper maps made by huge printers in the weather office.

About a week before the cold wave hit, one of the computer models we did have (the "Medium Range Forecast" or MRF, the predecessor to today’s GFS computer model) started showing a large surface high plunging out of Canada. With it came much below normal temperatures all the way down to the Rio Grande of Texas.

At first, we didn’t believe it could get that cold, but the model kept showing the same prediction day after day, so I started to believe it.  By five days out (TV stations only did 5-day forecasts then), I had a super cold forecast for Waco of lows near 11 and highs in the 20s.

Although my forecast was the coldest in town, I turned out to be about 10 to 15 degrees too high.

In this cold snap, there were three cold fronts.  Much like Wednesday's situation, the first front didn’t do anything spectacular.  The second front just prolonged the cold. But then the third front hit and it was absolutely the coldest, a true Blue Norther with howling north winds.

The 1989 arctic outbreak was mostly dry but there was a narrow path of snow that moved north of Austin and south of Temple.  I remember the lovely town of Saledo being covered in snow just a few days before Christmas.

All-time low temperature records were broken or threatened.  Waco dropped to an astounding -4 on December 23, 1989, just one degree shy of the all-time record low set in 1949.  I remember reporting the current remperature on the 10 p.m. newscast the night before and it was only 9 degrees.

Austin dropped to 4 degrees above zero at the old downtown airport, the third-coldest ever recorded there. 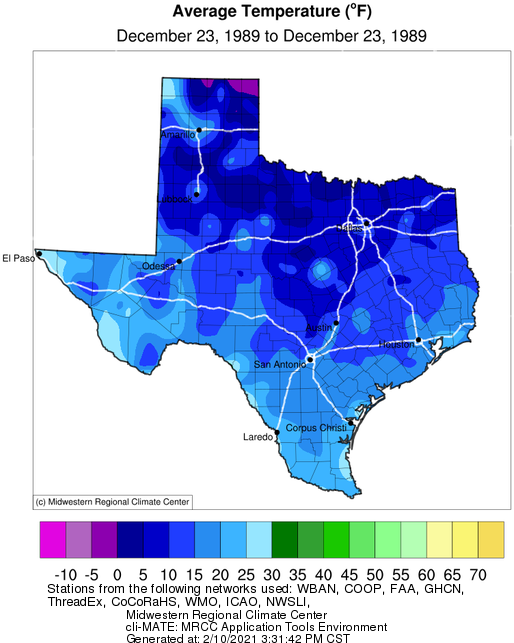 Cars and pipes really suffered.  There were broken down cars all over the highways of North and Central Texas.  The water hoses and belts couldn’t take the cold.

My TV station was in the on I-35 south of Waco. I remember our lobby was full of people stranded from cars that had broken down, and they walked to the station because they saw the tower and lights. There were whole families with kids just sitting in our lobby, just two days before Christmas.

Our receptionist was on the phone calling all over to find a mechanic or tow truck or anything to try to help the people.

Pay close attention to your pipes. In 1989, we saw severe damage from flooding after the temperatures warmed up.  With so many people working from home now, office buildings may not be occupied.  The pipes may freeze and nobody would know.

I remember the problem was really bad in the apartments occupied by UT students in downtown Austin.  Everyone had gone home for the holidays. They left and forgot about the heat.  A day or so after the warm-up, there was water running out of numerous buildings with major flood damage inside.

I also saw major impacts on agriculture and even our lawns.  Some oak trees simply died because the cold got too extreme.  And no, the cold weather did not kill the fire ants.

One other note about the deep freeze of 1989: it used up all of the cold air up north.  As cold as December was, January 1990 was one of the warmest on record.

Take care, my Texas friends – the next several days could challenge the 1989 cold snap.  Stay with your Spectrum News meteorologists for the latest and be ready.